On Tuesday, June 5, the Seoul Eastern District Court will finally hand down a sentence to Kang Wan Koo (aka Wystan Kang or Joseph Kim) the serial travel scammer who bilked scores of clients, mostly expats, out of more than 100 million won ($85,000) over the period of at least a year, according to Seoul Prosecutors. At the last hearing on May 8, the prosecutor asked the judge to sentence Kang to four years imprisonment, though sources familiar with Korean law expect a maximum of two years with the chance that the sentence could be suspended.

Since Kang was arrested and detained on February 13 of this year, victims of his chicanery have shown mixed emotions—some expressed relief that he was behind bars and thus unable to continue the scam while others scoffed at his detention because it meant that he was unemployed and without a means to repay his debt.

But, overall, the victims have been left empty-handed, fatigued and bitter. For the most part many of them have gone silent as the case has dragged on with the initial flood of online comments slowing to a trickle. Only a few have stayed vocal during Kang’s ongoing trial. One of them, Taryn Baek, who lost some $10,000 in a scam involving her and her Korean husband’s honeymoon travel and attended a March hearing, maintains that she isn’t giving up no matter what happens. “I will probably be in Korea for at least 10 years,” wrote Baek. “I have his ID card and I will be following his every move after he is out. I am going to do whatever I can to get back the $10,000 he stole from me.” 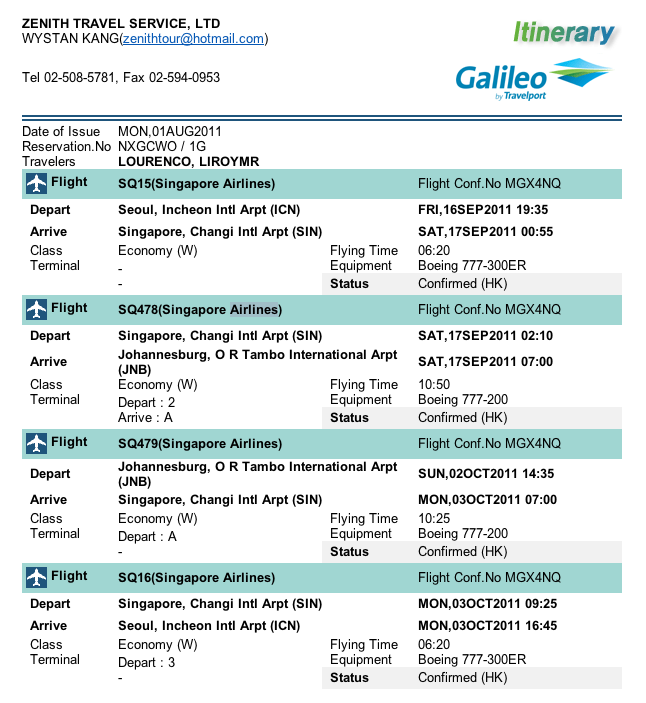 Liroy Lourenco's itinerary for a trip that Kang later cancelled.

Yet most of the victims–who come from places such as Pakistan, the U.S., Israel, Uganda and France–are not like Baek, and have left or will be leaving the peninsula. Some think Kang took this into account during his scheming, knowing that the uproar would die out and that victims would have little recourse. “I think people are waiting for us to leave,” said Liroy Lourenco, 25, who was scammed by Kang for 1,495,000 KRW last July. Lourenco, an English teacher from South Africa, had Kang book him a flight home, received the itinerary but, a few weeks later, the flight was cancelled. He never got his money back.

Now, after months of watching the trial play out, Lourenco believes things would have been different if he was Korean and thinks his story and those of the other victims will reflect poorly on the nation. “I can’t help but think that the outcome thus far would have been different if we were not foreigners. I was speaking to some friends back home who were thinking of coming over & now are second guessing it… it really doesn’t look good for Korea when something like this happens and goes unpunished,” Lourenco said.

A separate civil case that was brought by 20 victims proved futile after Kang never answered the filing and, following a deadline, the case was closed according to Tae-jin Jo, an attorney with the Korea Legal Aid Company who was representing the victims the case against Kang. At the initial hearing in March, Jo approached Kang’s private attorney to inquire about a possible settlement and was quickly rebuffed. Asked if he had again inquired about some settlement, Jo said, “I didn’t contact the lawyer. He already said he can’t afford to repay our victims’ money (damages), so I thought I don’t need to beg him for our money.”

For months now Kang’s financial situation has remained obscure, though the Prosecutors’ Office stated that “he has no money”—they would not elaborate on details due to legal restrictions. Kang also repeatedly told victims that his business was in financial difficulty (this was a staple part of his spiel). Kim Hyun-joo of the Korea Tourism Organization’s Tourism Complaint Center also said that officials at the Songpa District Office in southern Seoul—where Kang had opened a new agency called Expert Travel under the name of Joseph Kim—said the business appeared to be having financial difficulties and also did not have the proper license to do business with foreigners. Her only hope was that he would be shut down–she did not expect financial compensation: “Please tell the victims that I cannot help recover any money,” said Kim. “I can only hope to stop him from doing what he is doing.”

None of this satisfies victims who think there must be money somewhere even if it is with his extended family or in property. “There must be a paper trail & there must be assets somewhere,” wrote Lourenco in an email. “I feel like if someone looked hard enough they could find money to reimburse us with.” Baek, expressed the same sentiments: “Where did the money go?” she asked. “Can’t they find out where he put it?”

Prosecutors, according to reports, had full access to Kang’s financial records including his bank accounts. It is so far unclear what assets Kang had or has and whether or not he could have moved money to accounts under different names. Victims listed several different accounts that Kang had them wire money to and prosecutors’ were provided all that information via attorney Jo and Ms. Kim (Kim helped translate documents into Korean that 3WM obtained from victims).

For now, it appears rather certain that Kang, at the most, will receive some jail time (whether suspended or not) but will not be required to return any of the money he stole from the victims. Where that money went remains a mystery and may forever elude the hands of its rightful owners.

3WM will report on the sentencing.

Note: There is a print link embedded within this post, please visit this post to print it.
—
About 3WM   Archives   Podcast   Headers   Funky Seoul  Submissions   Artists  YPC