Just like how adjectives are used in English, Korean adjectives are that fun little thing that can make an otherwise dull sentence pop out with color and character. We imagine trying to come up with sentences without using any would often come across as quite flat and lifeless.

By equipping yourself with a diverse range of Korean adjective knowledge, you’re one step further into mastering a new language. On top of that, you’ve learned tons of words to dress up and add depth to your sentences. 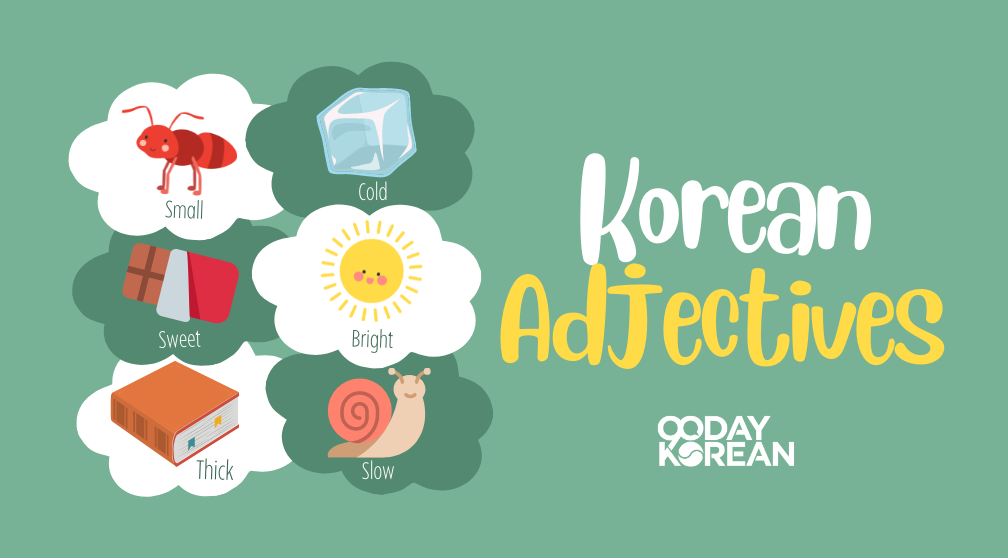 In this lesson, we will teach you a little bit about how to use Korean adjectives and give you a list of the most common ones. To further help you understand how they are used, we have also prepared some sample sentences for you to view and take notes on. Let’s get learning!

What are Korean adjectives?

Just like in other languages, a Korean adjective also describes whether a noun is big or small, young or old, cheap or expensive, and so on. And just like with Korean verbs, there are also irregular adjectives in the Korean language.

How do you say “Korean adjectives” in Korean?

The word for “adjective” in the Korean language is 형용사 (hyeongyongsa). You can use it whenever you are talking about adjectives in general.

How to conjugate adjectives in Korean

Adjectives in Korean need to be conjugated when in use; instead of picking the Korean word out of a Korean dictionary and directly placing it into a sentence as you first saw it. After all, these conjugations give a more precise meaning to the Korean word.

We already have a blog post introducing you to the basic rules of Korean conjugation, but we’ll go over how to specifically conjugate Korean adjectives below.

In the case of the aforementioned irregular Korean adjectives, here’s how to conjugate them.

Adjectives in their different forms

As you learn Korean further, you’ll notice that there are also situations where you can use the adjective in its basic form or dictionary form.

This is possible in situations where the Korean adjective comes after a noun, although typically only in certain types of written text. You might get to use it in an academic article but might look a little funny using it in a text conversation with a friend.

Below are different examples of conjugated Korean adjectives to help you better understand the concept above.

How to use a Korean adjective in a sentence

There are two positions you can place the Korean adjective in a sentence: before or after the noun. Its placement determines the way it is conjugated.

Below are Korean adjectives for colors. These adjectives can help you describe nouns easier, just like “blue eyes,” “yellow dress,” “black hair,” etc.

You can also learn what more colors in Korean are called with our article on the topic. Note that while colors also count as adjectives, in the Korean language they are not seen as descriptive verbs, unlike most other adjectives.

If you’d like to describe nouns based on their dimensions, distances, sizes, and shapes, then you can familiarize the Korean adjectives list below.

Korean adjectives can be used to describe weather, a person, qualities, and situations. These words can help readers and listeners have a clearer picture of them.

In this section, you’ll learn the different adjectives in Korean that you can use to describe words for qualities of a person or weather, and other situations.

Would you also love to find out how to describe different weathers and seasons? Head over to our article about Weather and Seasons in Korean!

Here are adjectives in the Korean language to describe someone’s traits, feelings, and moods.

Here are some adjectives in Korean to help with describing nouns with certain tastes and textures. These adjectives will come in handy if you’d like to describe what a certain Korean dish tastes like for you.

To get you properly started with using Korean adjectives in sentences, here is an ample amount of examples of Korean sentences. You can study each sentence and its meaning for you to understand how to use adjectives in the Korean language better.

Isn’t our cat so cute?

I want to buy an expensive Prada bag.

In Northern Europe, it is light outside until almost midnight in the summer.

Whoa, I did not realize it was this hard to hike up Hallasan.

Today I want to wear shoes with really high heels.

The USA is really far from South Korea. The flight time is over 13 hours!

I wonder if that person is pleased?

Where do you think is the most beautiful place in the world?

That movie was nicer than I thought it would be.

I screamed loudly in surprise.

This class is so boring.

Your brother seems to be a very quiet person.

Wanna go to a club?

Thomas, what is the heaviest weight that you can lift?

Did you think yesterday’s homework was unusually difficult?

It wasn’t, though? I thought it was super easy!

Wow! That’s so many new cool Korean adjectives and words for you to learn today! If you are still in the mood to widen your Korean vocabulary today after that mammoth of a list of Korean adjectives, why not check out our more general list of most popular Korean words? Can’t go wrong with this resource in learning Korean!

Also, below in the comments, we’d love to know what your most commonly used Korean adjectives are? Perhaps you could try to showcase them by using Korean adjectives only? We’re excited to know the most popular adjectives used as we learn Korean these days!

The post Korean Adjectives – Descriptive verbs and how to conjugate them appeared first on 90 Day Korean®.

END_OF_DOCUMENT_TOKEN_TO_BE_REPLACED
Do you think masks should still be required on public transportation in Korea?
Yes
57%
No
43%
Total votes: 123