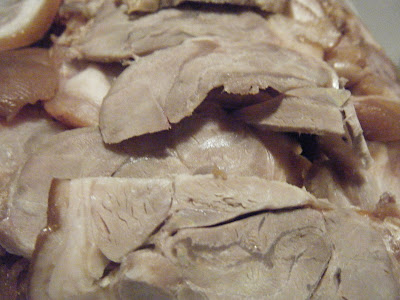 Recently I’ve been worried my posts are getting a little pedestrian. Who wants to read about pork skewers, I thought to myself, Internet users vote with their feet and if you’re not careful Danny boy, they’ll surely leg it somewhere else instead. You’ll never get a foothold in the blogging game if you carry on like this, do something different you idiot!

Ok, before I get carried away and really put my foot in it, I’ll dispense with the puns and get on to the post’s real topic. Jokbal is a dish made by simmering pig’s feet (hair removed) in leeks, garlic, ginger, rice wine and water until tender, before being slicing it up and serving with a variety of condiments. I bought mine at our local market where whole joints of Jokbal wrapped up in cellophane compete for space at several different stalls. In addition to a generous tray of Jokbal, my 5,000 won also bought me a tray of sliced onion, sliced chili, a smudge of wasabi and two little bags of soy sauce and bean paste, as well as a tub of spicy sauce and another of saeujoet (fermented shrimp sauce.) 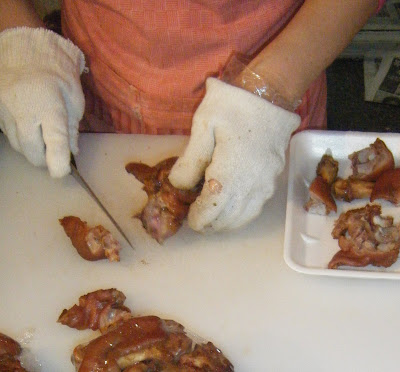 The slices of Jokbal were thick and cold, reminded me of the cold cuts of ham and roast beef left over after Christmas dinner, with clear seams of fat swirling through them at seemingly random intervals. The overall result was an even distribution of fat through a meaty, fibrous slice of pork. Had there been a little pastry involved the whole thing could easily have passed for a Heston Blumenthal deconstruction of a pork pie, such was the easy familiarity of it. The only place where it differed to what I’m used to at home was with the skin. Here it was thick, undisguised and a little chewy, though didn’t put up enough of a fight to be a problem.

Among the condiments, the saeujeot really made me sit up and take notice. Tiny tiny shrimp with big black eyes floated around in a salty, briny liquid concoction that is apparently one of the key ingredients of Kimchi. When introduced to the Jokbal, the saeujeot provided a good counterweight to the greasiness of the pork. The same could be said for the vinegary soy sauce and wasabi, which is fast becoming my favorite dipping sauce ever. 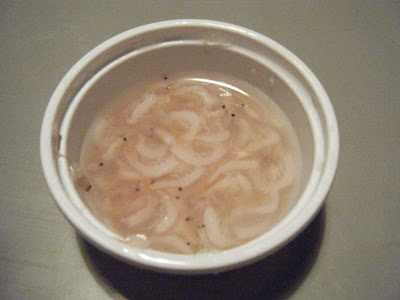 Although Jokbal may initially sound a little alien to the western palate, there’s really nothing strange about it. In my opinion Jokbal would find a great home underneath a lid of pastry or between two slices of bread and compared to some of the other pig bits I’ve tried recently, it’s a real walk in the pork.