By Lee Scott and Iwazaru 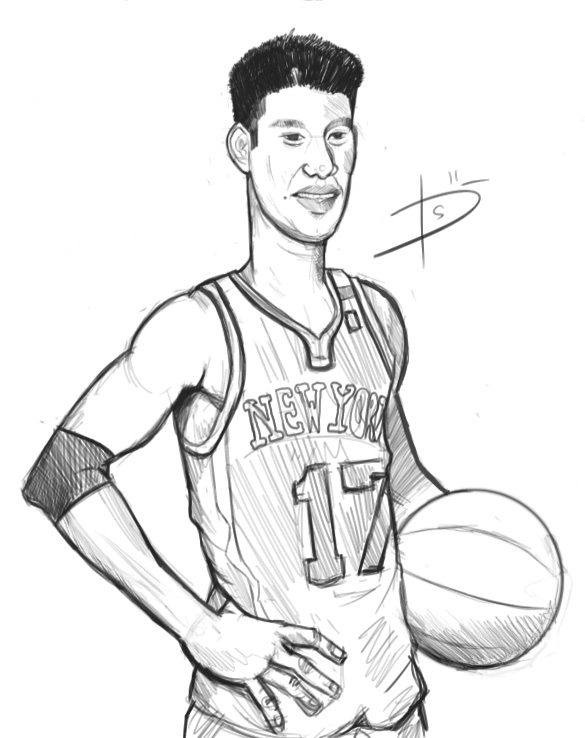 By Daniel A. Singley ([email protected])

The first rule of doing damage control on an Internet meltdown is to protect your Twitter page.  That’s what I found when I got around to checking out Jenny Hyun’s page a full five days after her rocketing to the top of my “Korean Americans I had never heard of till now” list. Jeremy Lin I had heard of (who hasn’t by now?). Floyd Mayweather, too.

Interestingly (to me), it was about five days after Floyd Mayweather made his (at best racially insensitive and at worst racist) remarks about New York Knicks player, Jeremy Lin, that Hyun went off the deep end.  Mayweather tweeted on February 13, 2012:
“Jeremy Lin is a good player but all the hype is because he’s Asian. Black players do what he does every night and don’t get the same praise.”

Mayweather’s comments sparked not only Hyun’s tweet-tirade (more on that in just a moment), but also prompted Ultimate Fighting Championship president, Dana White to call him a racist .

But Mayweather is not alone it seems.  Science fiction TV legend and Asian-American TV celebrity pioneer, George Takei blogged about several incidents as well.  Almost unbelievable is his claim that, “The stereotypes are so rampant that a Fox newscaster felt it appropriate to tweet after a Lin victory that ‘Some lucky lady in NYC is going to feel a couple of inches of pain tonight.’” Yet facts are facts and stereotypes seemingly more widespread; following an outstanding performance on a nationally broadcast game against the Los Angeles Lakers (and,of course, Kobe Bryant), Fox Sports columnist, Jason Whitlock, tweeted: “Some lucky lady in NYC is gonna feel a couple inches of pain tonight.” He later apologized.

Let’s get back to just who the heck Jenny Hyun is; she is a Korean American songwriter who has written or co-written a couple of songs for some popular K-pop groups here.  Hyun’s profile on her Web site describes her as: 27; female; Korean American; NYC; Christian/Jewish/Buddhist/Hindu/Humanist; singer; songwriter (Girls’ Generation, ChoColat); poet; dancer; lover; fighter…

After tweeting an insane number of shit-house-rat-crazy racist tweets against Mayweather, she apologized on her blog but has since taken it down.  A number of sites have preserved some of the equally crazy Internet meme-style images she posted.
Here is a run-down of some of the coverage (in no particular order): Asian Junkie; Manilla Bulletin; Korea Boo.

And here are screen shots of her tweets (which are available just about anywhere it seems). 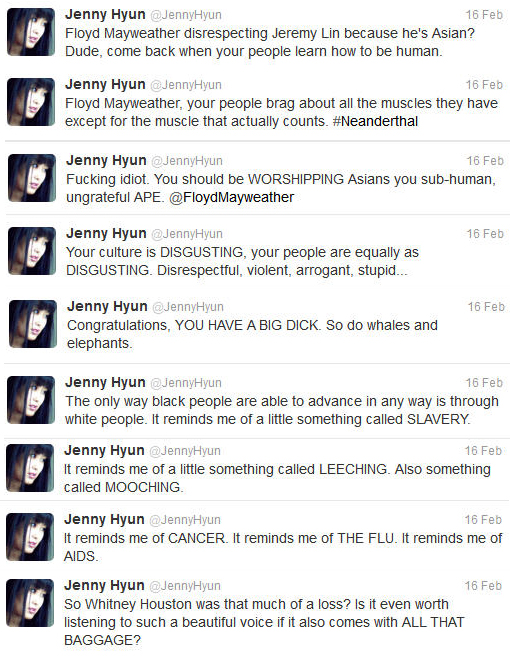 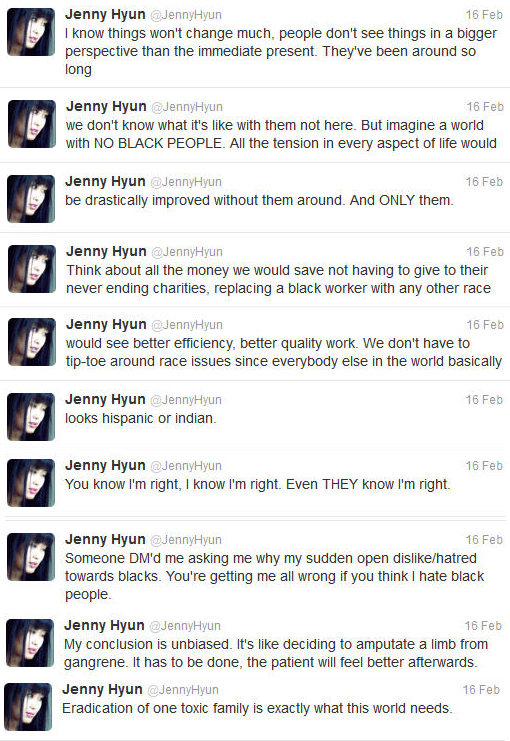 What lies in her background that prompted such racist slurs and outright online suicide still remains mostly unclear though allusions to her mental stability have been made (a whole different kind of Linsanity). Reportedly, though now sent somewhere into the far reaches of cyberspace, a member of Girls’ Generation posted comments critical of the posts but defended her when someone said Hyun’s future children should face some gruesome fate. Since, it seems, all people professionally associated with her have either decided or been ordered to cease and desist all public commentary.

Below is a tweet she is credited with in happier times.

Too bad she didn’t take her own advice.

The last update on her blog posted February 19 and titled “apology to all” states:

Jenny Hyun has been admitted to a hospital today. She is a paranoid schizophrenic and has been battling mental illness, a debilitating disease for many years.

Friends and family of Jenny want to extend their sincere apology for any harmful statements made verbally or via the web that Jenny has made while she was in the height of a psyshosis [sic] episode. We appreciate your understanding during this difficult time for her.

Surely such a revelation provides room for some understanding.