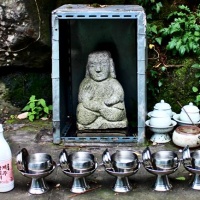 South Korea is one of very few developed nations to have maintained a Shamanic heritage over millennia, and although Shamanism’s influence has diminished on the Korean mainland in the face of modernization, state-sponsored oppression and a generational shift in recent decades, it is still widely practiced on Jeju by a shrinking, but significant, number of elderly islanders .

Here’s writers Anne Hilty and Hong Sun-young from a 2013 piece in The Jeju Weekly magazine:“On Jeju, shamanism has long been the core of village life. In its village-based shamanistic system, all conflict within a village was expected to be resolved prior to communal rituals in order to help ensure the gods' benevolence and village prosperity.Jeju’s traditionally egalitarian society was based upon mutual aid; its matri-focal structure included powerful female deities, and diving women, or Haenya, as the primary economic force.”http://www.jejuweekly.com/news/articleView.html?idxno=2926Filmaker, writer and photographer Joey Rositano has spent more than three years attempting to answer this question, documenting, researching and collecting myths and stories from the elderly practitioners of shamanism on Jeju island.His documentary ‘At Search for Spirits on the Island of Rocks, Wind and Women’ premiered at the 2014 Jeju Women’s Film Festival and a book of his photography work entitled ‘Spirits: Jeju Island’s Shamanic Shrines’ was released this week.This is the second of a two part conversation.For more on Joey's documentary, to find out about shrine preservation efforts on Jeju or to order a copy of 'Spirits: Jeju Island’s Shamanic Shrines', go tohttps://pagansweare.wordpress.com/