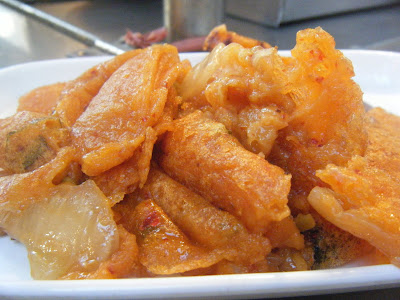 In my last-post-but-one I felt I had purged myself of my often inappropriate love of pajeon, the Korean seafood pancake. I thought that was it for my online paj-love, and I was just coming to terms with the comedown when I happened across another Korean pancake classic, kimchi-jeon, being served on the street behind the Lotte Department Store in Seomyeon.

I documented my then burgeoning affair with Kimchi on my old TV Casualty blog, and since then the relationship has flourished. I routinely hoover the kimchi at our lunchtime diner and though I’m still too much of a lily-livered westerner to stomach anything that’s been fermenting too long, I think I’m getting a good grip on the range of tastes that’s out there.

Kimchi-jeon marries the best of both worlds. The crisp, doughy batter plays a gracious host to the kimchi, which in turn passes on all its best assets to the pancake. Although kimchi is spicy, it’s rarely a tongue-burner and it’s rounded, garlicky heat shines through in the jeon, which takes on a sort of spongy texture in response. 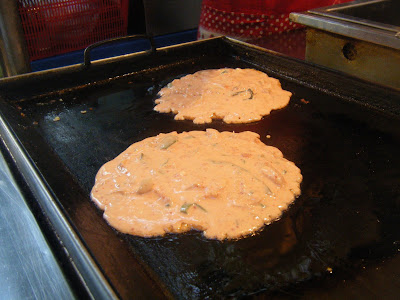 Kimchi has the added bonus of taking on a new dimension when it is cooked, with the fried-out fish sauce kicking things up in the flavour stakes. As usual the pancake was great on its own but elevated by quite a few notches when dipped into the accompanying dish of soy sauce.

I just hope the pajeon won’t get jealous.