Skip to main content
While casinos are the major pulling force for the majority of tourists to Macau, the area does have a lot of other things to offer. Its unique history as a Chinese-Portugese outpost has shaped the landscape, with various forts and 16th century European architecture spread across the territory. 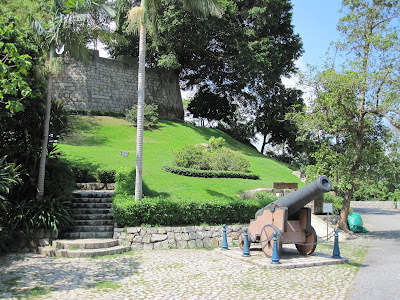 The Macau government imposes a 40% tax on all gambling revenue, and has used a good portion of the profits to boost infrastructure and preserve its cultural relics. The Monte Fort is a good example of this, sitting a little away from the city on a hill, with authentic stonework and well-kept gardens. 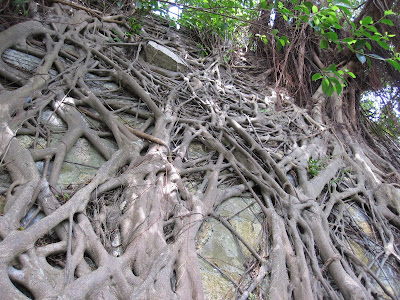 Intricate tree root lattices like these cover much of the old walls. I like how the smaller roots merge with each other over time and become one larger vessel. It's similar to what happens when you graft plants together. 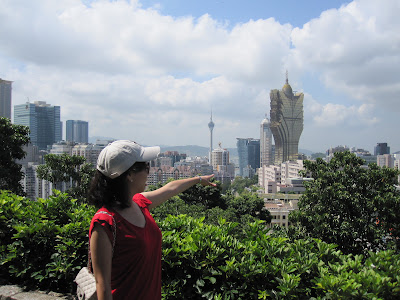 Off in the distance, the conspicuous outline of the Casino Lisboa can be seen. It lights up brilliantly at night, and can even be seen from mainland China. 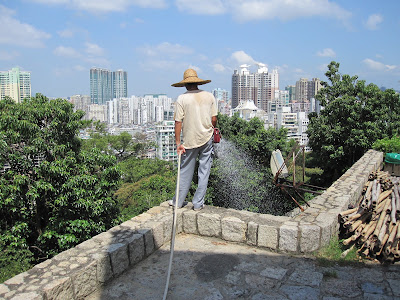 The grounds keeper was watering the flowers below with a hose. He was standing on the edge of the wall, with a good 20 metre drop below him. 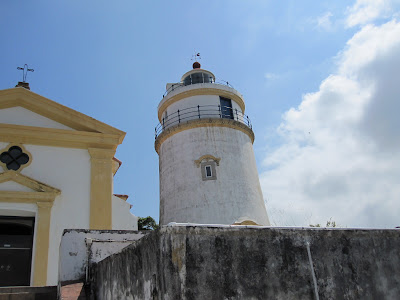 The purpose of this lighthouse was to warn residents of incoming typhoons during monsoon season. A large portion of the population used to be fisherman and traders, and this lighthouse would flash different patterns according to what the weather would be like. For example, there was one pattern which meant 'incoming storm' and another that meant 'clear skies'. 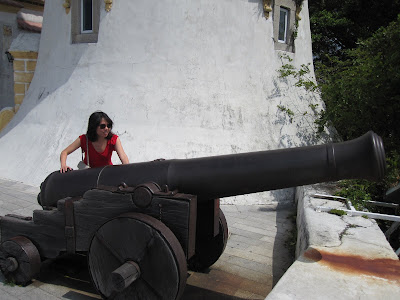 The Monte fort was described as Macau's primary defensive structure in times of siege. Fortunately though, it never had to be used. These large cannons were able to hit targets out in the harbour. 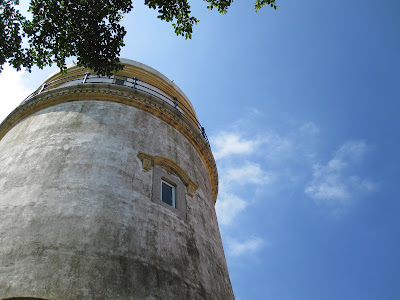 A nice view of the lighthouse and sky. It's a pity that lighthouses don't have much of a role anymore. There's something mystical and romantic about them. For sailors lost out in the dark seas, they were beacons of humanity.

I like staring up at them while the clouds pass by, inducing a mild state of vertigo. 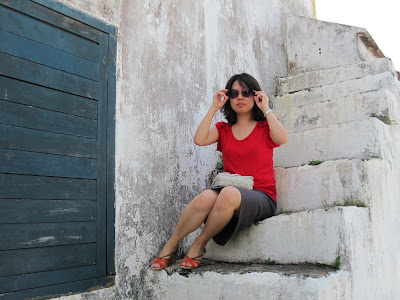 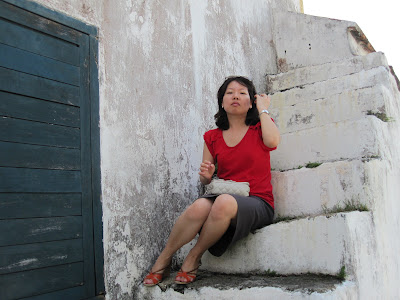 I told Heather to pose on these stairs. I imagined that the slightly rustic paintwork would make for a nice vintage photograph.
Back when I was an undergrad student, I started to get into the more detailed aspects of photography. But then I gave up when I realised that most of my photos were not very good, compared to the ones that people were posting on the photography forums. 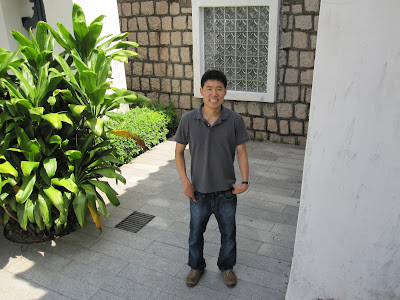 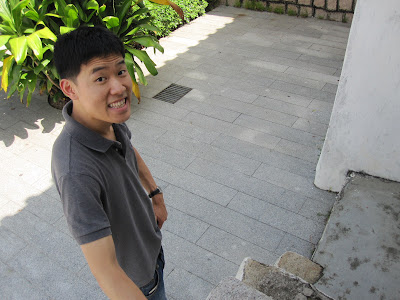 Then Heather told me to pose for some photos. For some reason, I have never been very photogenic. See that smile that I'm doing? That's the one that says 'You don't need to count to three every time you take a photo....' 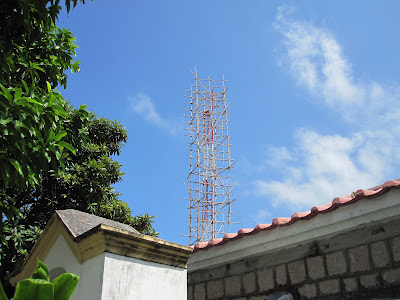 Here's some bamboo scaffolding that was supporting a radio antenna. Bamboo is reliably strong enough that construction workers have no qualms about climbing around on the top of structures like this. They remind me of the engineering projects we used to do in primary school, building things out of drinking straws and sticky tape to see how much weight they could support. 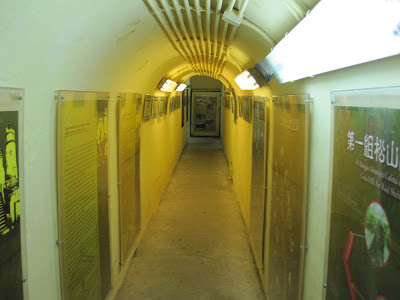 Running underneath the fort is a network of tunnels which were built as an air-raid shelter. 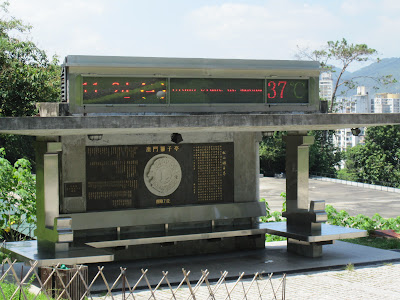 The views were nice but the day was an uncomfortable 37 degrees. I prefer monsoon season, but you do tend to get ridiculously wet in a matter of seconds. 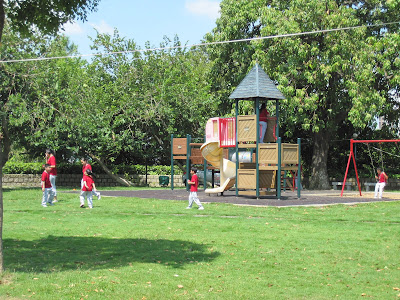 Despite the heat, these little kids were playing in the sun without any problems. Heather and I stared at them for a while, wondering what their secret was. Maybe they had cold packs in their undies. 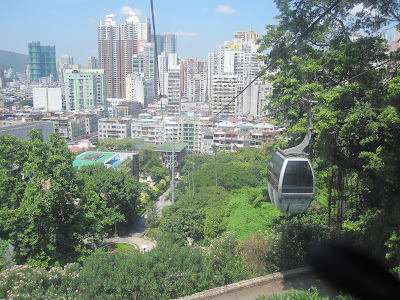 Luckily for us, there's a cable car service that takes you down the other side of the hill. But it wasn't air-conditioned, which was interesting. You wouldn't want to get stuck in the middle during a day like that. 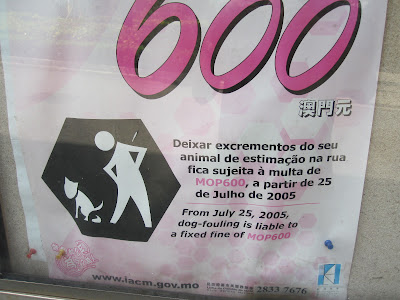 People who come from Macau are called Macanese. The population is 95% Chinese, but because the official languages are both Cantonese and Portugese, most public signs include Portugese translations. Jo-anna informs me that Spanish and Portugese are two distinct languages.
I don't know any Portugese, but I can hazard a guess at what 'excrementos' means. 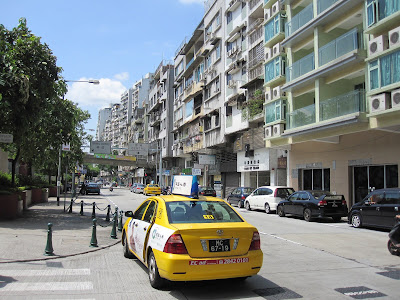 Macau has yellow taxis, whereas Hong Kong has red ones.
I appreciate trivial facts like these. 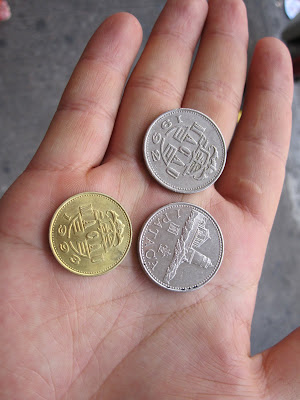 You can use Hong Kong dollars in Macau, or their local currency which is called Patacas. One Pataca is worth only slightly less than a Hong Kong dollar, and the locals here treat them as the same thing. There are 100 Avos in a Macanese Pataca.
I like the sound of 'Patacas'. Throughout our stay in Macau, I was often asking Heather how many Patacas she had left, just because I wanted to say the word Patacas. 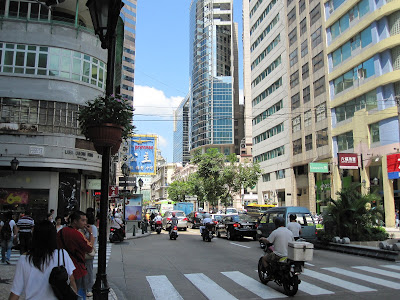 This is the central business district of Macau. Besides tourism, there is a smaller fishing industry here, as well as a lot of financial services companies. 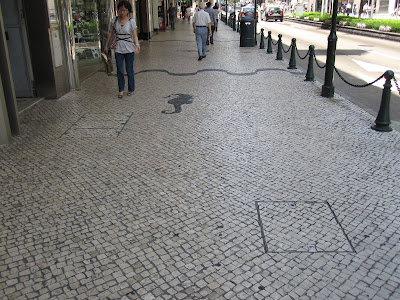 A lot of the streets of Macau have good mosaic tiling. The stones are all individually cut by council workers and the process is more labourious than concrete, but it's much easier on the eye. 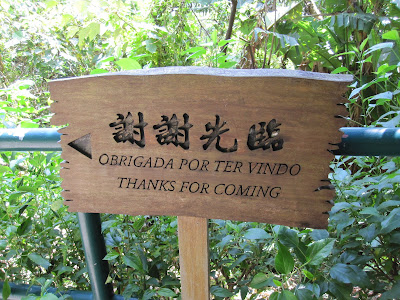 I'd say I'm about half way through posting the pictures from our honeymoon now. It was only two weeks, but we kept ourselves busy. The next couple of posts are still from Macau, then it's off to Australia!

That's all for this post. More from Macau coming soon...