Skip to main content
The city of Hong Kong is separated into two halves by a large body of water. Connected to mainland China is Kowloon and across the water is Hong Kong Island. The New Territories are a more sparsely populated area to the northwest. If you're coming to Hong Kong as a tourist on a tight schedule, I'd recommend finding a hotel in Kowloon and taking a daytrip out to see Hong Kong Island. 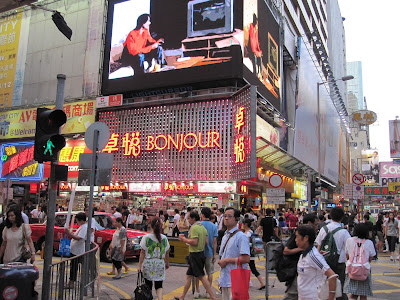 Kowloon is a good place to stay (we stayed near MongKok Station) because you're closer to the airport and right in the middle of the busy shopping districts. If you don't like shopping and noise, you could probably find a nice hotel in Aberdeen, but it may be more expensive.

On a side note, two good restaurants in Adelaide Chinatown that I used to eat at were called Cafe Kowloon and the MongKok Restaurant. Now I know what the names are referring to. 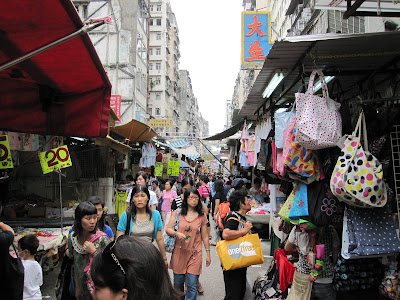 Lots of tourists target Hong Kong as a shopping destination. Clothing, food and souvenirs are noticeably cheaper, but other things like electronic goods are similar to Korean prices. The best places to go for cheap clothes are the markets in Kowloon. Here they'll sell shirts for around US$4 as the asking price, but you can easily bargain that down if you're willing to put some time and acting into it. Bargaining is fun if you have the time, although not quite so enjoyable if you're in a hurry. 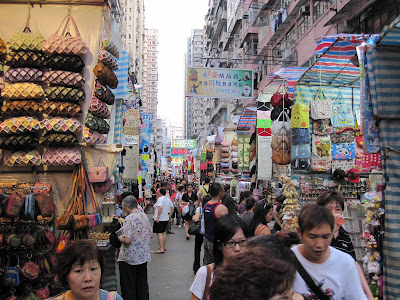 The basic modus operandi of market vendors in Hong Kong is to first give a lightning assessment of the potential buyer. From my brief observations, it seems that you'll be given a lot of attention and less room for bargaining if you look rich and from a western country. Next come other Asian tourists, who get given a little attention and more bargaining leverage. At the apex of the economic shopping category come the native Cantonese-speaking locals. They will often be able to get a cheap price in a short amount of time, with the vendors just waving them off quickly so they can concentrate their efforts on the more naive customers.

As a general rule, you're not getting a bargain unless you pay less than a third of the advertised price. Heather and I did fairly well, after a few hit-and-misses. 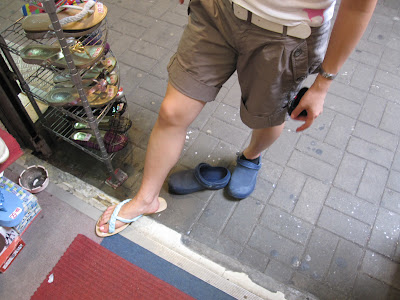 A good thing to remember is that if the vendor is watching you, don't look like you're interested in any one particular item. If they know that you're interested in a certain item, you're sure to have difficulty bargaining it down. Ask for prices on a few different things first, and then eventually arrive at the thing you're after. If it's $100 HK dollars, ask for it for $20. Then they'll probably say $85. Give it some time and make use of the oversized calculator they always have nearby.
If that doesn't work, try pulling the oldest trick in the book. Pretend to give up on it and start walking away. If the vendor isn't busy, they will nearly always shout a cheaper price as you're just out of hearing range. If they don't call after you, don't worry because there'll be a shop selling exactly the same thing just up the road and you can try again.

There's always room for common courtesy and mutual respect though. 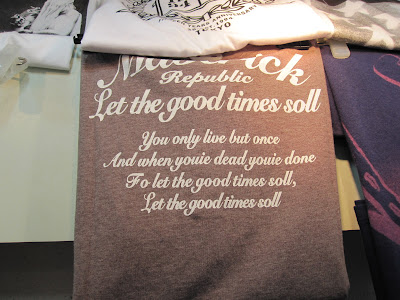 Common to much of Asia is the endless bemusement to be derived from English mistakes on shirts. 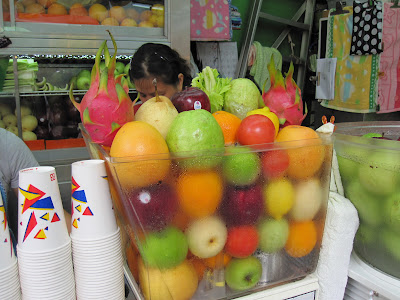 For US$2, you can get any three of these fruits blended up in a smoothie. We tried carrot, orange and apple, which was a surprisingly good combination. The next day we came back and had some more.
The fruit on the top left that looks like it's on fire is called Dragonfruit. The flesh is white and has little black seeds like kiwi fruit. 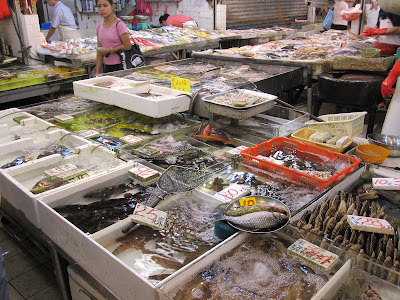 Live seafood is sold in a similar manner to Korea. I remember when I first went to Jagalchi in Busan, I saw an ajumma buy a live octopus with a head that was only a little smaller than a basketball. The vendor put the squirmy creature into double-lined shopping bags and it was just carried off, writhing in a rather curious manner. Through the opacity of the bag you could see things like tentacles, something wet and breathing, and an eyeball. 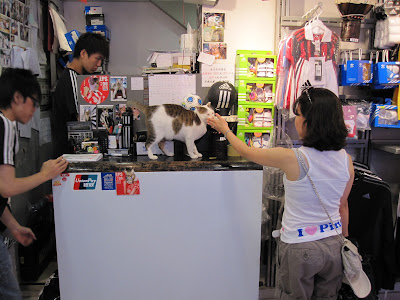 This Adidas shop had a resident cat wandering around and greeting the customers. Before I came to Korea, I was always a dog person, but these days I'm learning to appreciate cats. I like the fact that they know where to poop, and they don't smell bad.

But then again, nothing beats coming home to an exuberantly excited canine, overjoyed with just the fact that it hasn't seen you since you left in the morning. 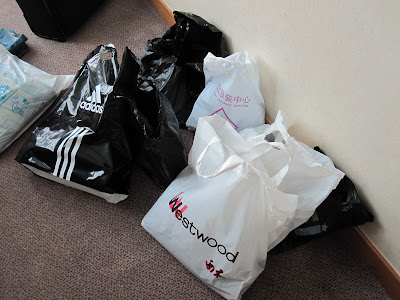 We came back to the hotel with a fair bit of shopping. I think I spent around US$300, but it was a $300 well spent. Luckily, I had packed a half empty suitcase in anticipation. 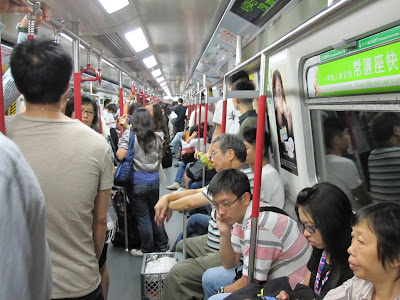 Then it was off to meet Tommy for the second time. The Hong Kong subway system is fairly simple and easy to use. The line map is much simpler than Seoul's, and everything is nice and clean. 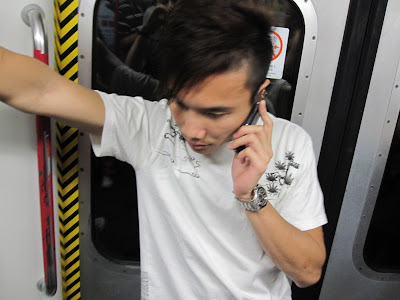 This is Tommy Lau. I used to live with this guy back in Australia for a couple of years and we're good friends. Now he works in a trading company and seems to be doing pretty well for himself. He picked us up at the airport and took us around to some bars. These days he seems to be a little wiser and a little more healthy than when I last saw him.

It was nice catching up with him, and now it's his turn to come and see us in Korea! 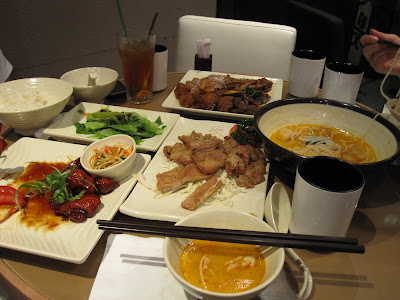 He took us out to a Taiwanese restaurant. You'd expect to eat out at a Hong Kong restaurant if you're visiting Hong Kong, right? But the funny thing is that for me also, when people come to visit Korea, I feel like taking them out to foreign restaurants in Itaewon. Mainly because I spend too much time eating Korean food, so it doesn't seem special anymore.

For the record, Taiwanese food is quite nice and they like to eat sweet spiced chicken. 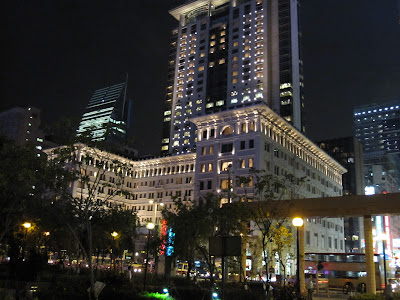 This is the Peninsula Hotel, one of the most famous in the city. If you're feeling suave, you might want to stay here or at the Intercontinental. 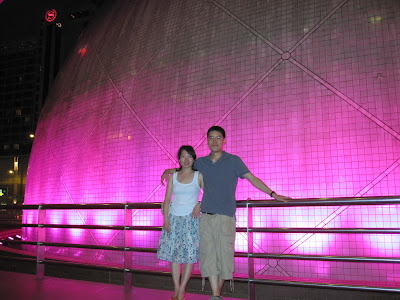 Here's Heather and me in front of the Space Museum. It's shaped like this because there's a planetarium inside. Anybody who knows me, knows that I like all things space-related, except for long-bearded professors who talk too much about the mathematics.
We came back to have a look inside, but it's closed on Tuesdays and Thursdays. Take a note of that if you're visiting. 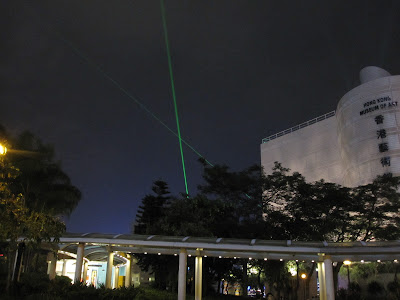 What are those green lights in the sky? They're lasers mounted on top of the buildings across the harbour. On certain nights, they have a Festival of Lights, and many of the buildings participate by lighting up in various neon patterns. It's all synchronised to a public music broadcast and worth coming out for, but we only got to see the tail end of it. 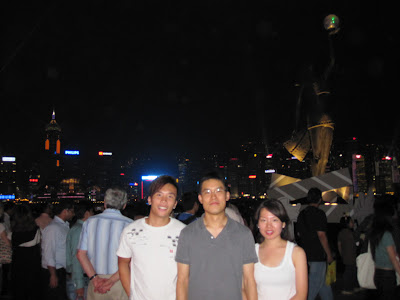 Here's Tommy, me and Heather on the Avenue of Stars. This area is a kind of boardwalk dedicated to important figures in Hong Kong movie history. 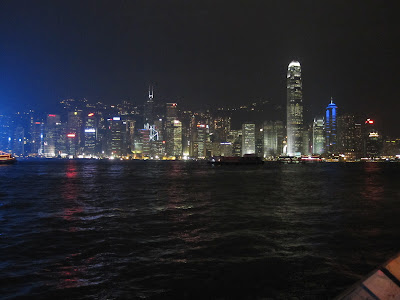 The boardwalk has some nice views of the harbour, surpassed only by Victoria Peak, which we'll see in the next blog post. That really tall building on the right is Two International Finance Centre. Batman jumped onto it in The Dark Knight movie. 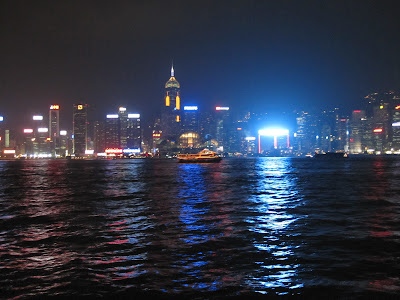 Notice that dazzling blue neon billboard? That's none other than Samsung's contribution to the otherwise perfect photo opportunity. It's so bright that it becomes an overexposure problem in everyone's photos. 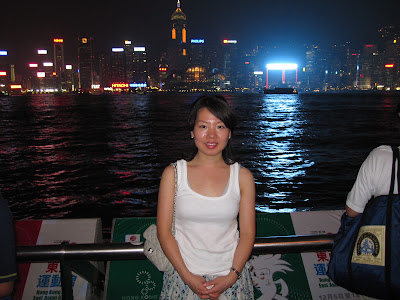 See what I mean? The funny thing is that in lots of the advertisements and other official photos of Hong Kong Harbour at night, the Samsung sign is actually covered up or obscured by something.

If any of the LKB readers out there works at Samsung, please ask the boss to hit the dimmer switch at the Hong Kong branch. 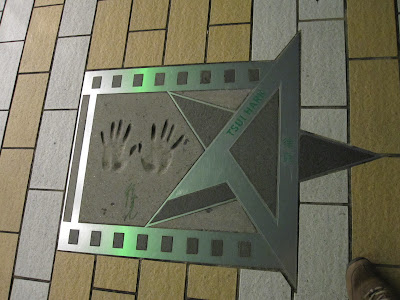 Similar to its Hollywood counterpart, the Hong Kong Avenue of Stars has these dedications on the ground. Tsui Hark directed the Once Upon a Time in China series, which are movies that captured my imagination as a middle schooler.

There was a time when I would jump around yelling "Futsan, Moying ge!"
(Cantonese for: No-Shadow Kick from Fushan!) 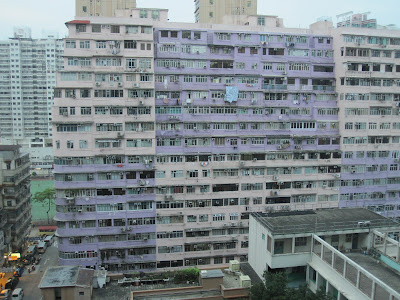 That's it for this time. I actually have to head to Jeju for 5 days this week on a science conference. So I'll be back with the next post sometime early next week. And I also start tutoring soon too.

Hmm... busy schedules; we all hope they lead somewhere worthwhile.