Skip to main content
Our wedding finished on the Saturday and we left Busan for the honeymoon on the following Monday. Having not had a holiday since Beijing in February last year, we were both looking forward to getting out and about again. Heather and I have a tendency to overload our schedules during working life, but traveling for us isn't very relaxing either. We try to make the most of it when we are lucky enough to leave the country, so traveling isn't good for relaxation, it's good for the change of scenery. 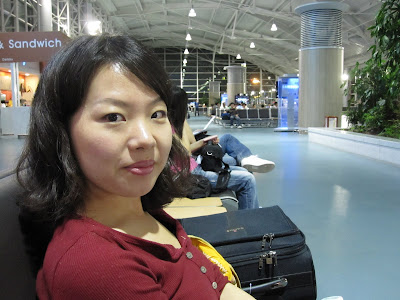 Here's Heather, still visibly bathing in the remnants of the wedding afterglow we both were feeling at this point. In the background is the departure terminal of Gimhae International Airport, which is the main airport that serves the city of Busan. 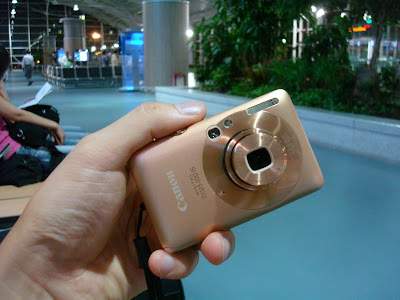 One of the things I had in the back of my mind for a while was an idea to buy a new camera. My old Sony DSC is fine, but is a little large and getting a bit long in the tooth. What I've realised with keeping a photo blog is that the quality of the camera is not as important as its carriability: which means (to me) 'the ease at which it can be carried around'. If the camera is too big, I'm not likely to put it in my pocket when I leave in the mornings, thereby missing out on a whole truckload of mediocre photo opportunities that I could have eagerly shared with you all.
The camera that I've always wanted since 2005, when I first started reading about cameras, is the one I bought in the photo above, from duty free at the airport. Albeit a much newer update to the original model. It's a Canon IXUS 100, and the original model used to be called the SD500 in Australia. It's a 12 megapixel; although I've since learned it's not the megapixelage that make the man, it's what he does with them. Other things it has include HDMI video, a battery that lasts longer than a week on honeymoon, and a nifty green square on the display that can detect when someone is blinking. It cost US$320 and it's really good.


This is the first video test I took with the camera, panning around the departure terminal. Heather is pulling a face, which she likes to do from time to time when I take photos of her. 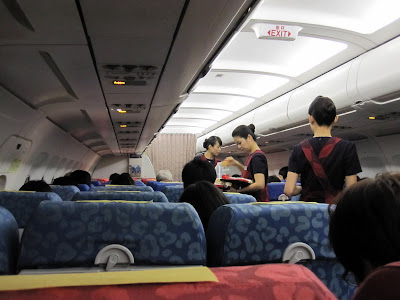 Our original agreement was for Heather to organise the wedding and for me to do the honeymoon. It was a pretty good deal if you ask me. So I went off and emailed a few travel agents. The best deal I could find had us going on a return trip to Hong Kong, Macau and Australia for around US$2000 each. When I told Heather about it, she just rang her travel agent friend and got us the same thing for half the price. That's why I prefer to leave Heather in charge of important things.
We flew on DragonAir to Hong Kong at around 8pm. It's a very cheap airline, but seemed nice enough. 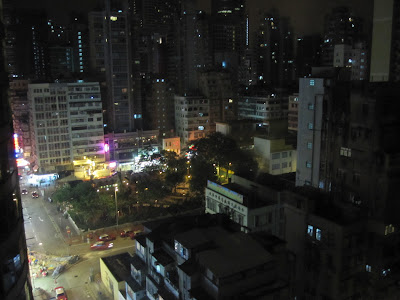 We arrived in Hong Kong around midnight and my old friend, Tommy, picked us up at the airport. We were a little tired and Tommy had to work the next day, so we went straight to the hotel to have an early night. The first thing I noticed about Hong Kong is that it's very warm at night. It's like a warm day without any sun. 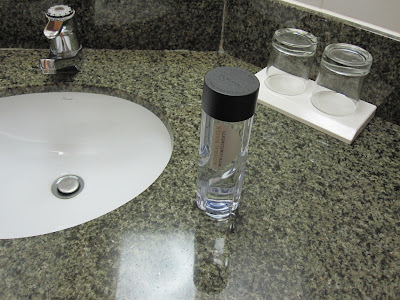 The second thing I noticed was that they have funny water bottles. This bottle of water said it had a use-by date on the cap, but the cap was blank.
When I think about it, things should only have a use-by date if they have something in them that can go bad. But I read the label and it only said 'Ingredents (sic): Water'.

I drank it and I still feel fine. 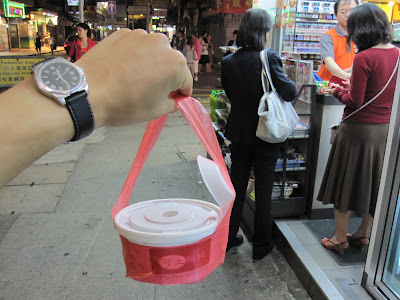 The best thing about traveling is seeing new things. The second best thing is eating different foods. I was feeling a little peckish at that point, so Heather and I ventured out onto the streets to find some food. A little noodle place sold us a little tub of noodles for $2, and I was impressed by the custom carry bag. 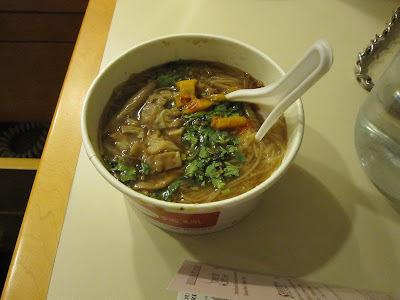 This is what it looked like back in the hotel room. Pretty decent for a snack and an enjoyable change from the usual samgak-kimbap that I eat in Korea. 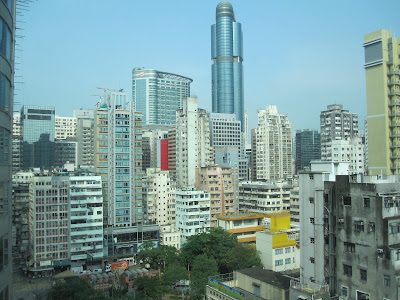 The next day we opened the curtains of the hotel room to this view. There are a lot of similarities to Seoul, but there's something different that I can't quite put my finger on. The buildings seem a little older, and there's a different colour of sky, perhaps. 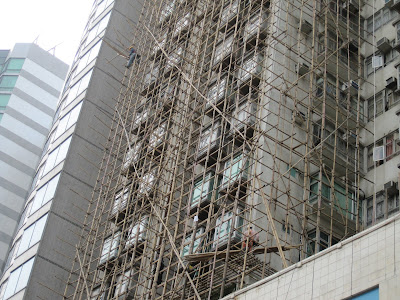 Right near our hotel they had this construction work going on. Our Hong Kong Island tour guide later told us that they use bamboo because it's strong, cheap and light. And unlike metal, in tropical regions it maintains a cool temperature when you climb on it with bare feet. 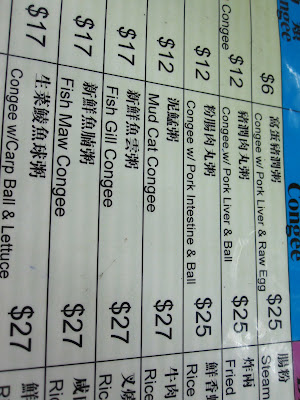 Then it was off to find some food again. I snapped this photo of the menu in the first restaurant, that we went to.

Mainly because I like the sound of 'Mud Cat Congee'. 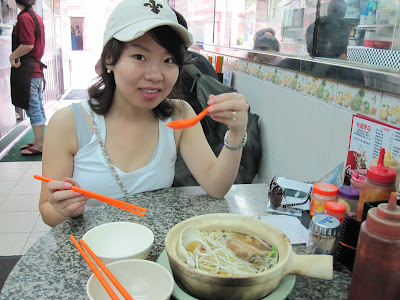 Food in Hong Kong is slightly cheaper than Korea. This means that you can get pretty good food for around HK$25 per dish. You divide the Hong Kong dollar by 7 to get American dollars. 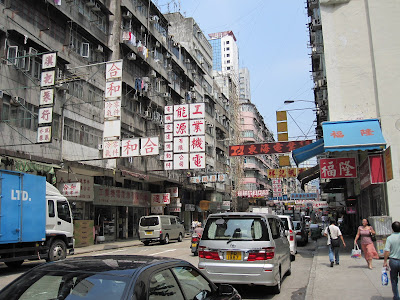 I'd seen the streets of Hong Kong in many a Kung Fu action movie in the past. The city has a very distinctive lived-in atmosphere to it, but doesn't feel as crowded as you might think.

I'm a big fan of the Chinese shop signs. 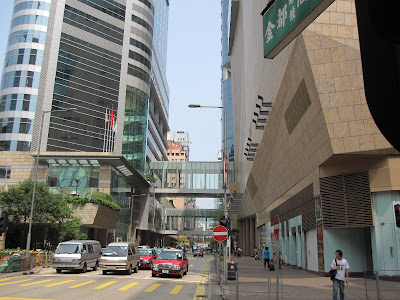 The scenery changes rapidly if you walk around for a bit. Closer to the subway station there were some larger chain stores and it felt like Sydney all of a sudden. 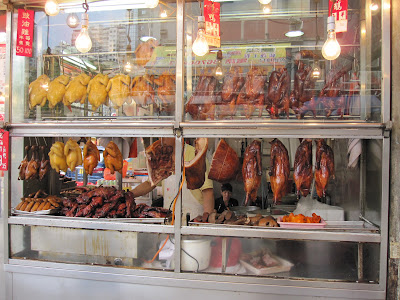 There's something grotesquely intriguing about the way meat-on-a-hook-in-a-shop-window looks. To me, at least.

My favourite? That would be the duck.

Around midday is when they start setting up the market streets in Kowloon. From little plastic hessian wrapped bundles unfold tent-like enclaves. Mainly selling things like souvenirs. 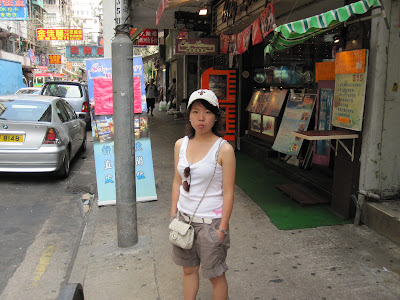 The first day we spent walking up and down the streets of Kowloon. Heather's done a lot more traveling than me, and is one of those people who prefer to let others take the photos.

At this point, we were liking Hong Kong a lot, but the heat was quite noticeable. 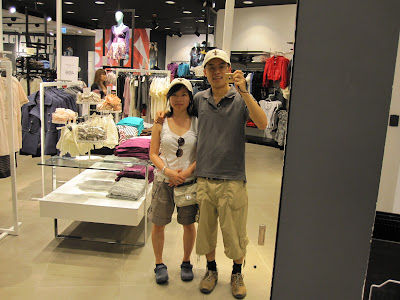 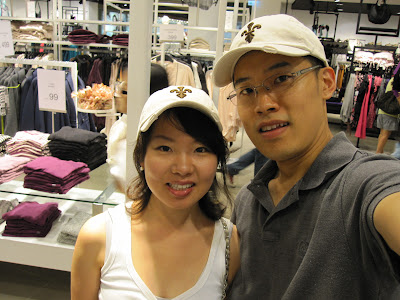 The best thing about going into department stores in Hong Kong is that they have industrial strength air-conditioning. It's like walking into the South Pole from the Sahara Desert. And they sell matching hats so that honeymooning couples can identify themselves to others. 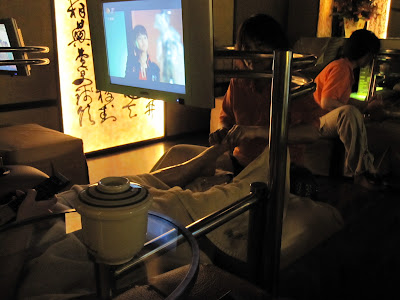 We found a foot-massage place and paid around US$12 each for a 45 minute massage. In this photo, Heather's feet are being massaged by a lady, while she watches TV. First they wash your feet in aromatic warm water, and then they massage away. I didn't know there were so many ways to rub a foot.

Heather loved it and fell asleep. I'm ticklish, so I found it to be an excruciating test of mental willpower. 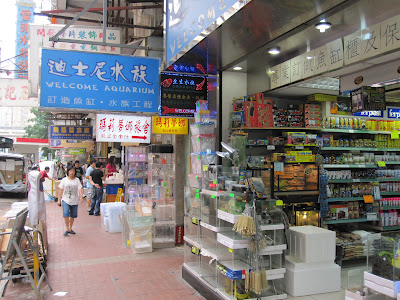 Then we went to find a place on our little tourist map called Aquarium Street. I've always liked aquariums since I was young. Back home in Australia I had a nice 3 foot long one and kept a happy family of comet goldfish for a number of years. 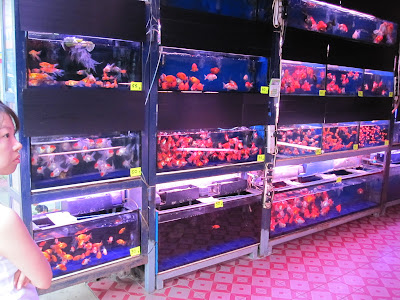 Aquarium Street is a one kilometre-long alleyway selling every conceivable biological entity that can live in aerated water. I think what I like about aquariums is that they look like miniature worlds. And I always like to wonder what goldfish are thinking.

Hey. You there. Monkey face. Stop tapping. The glass. 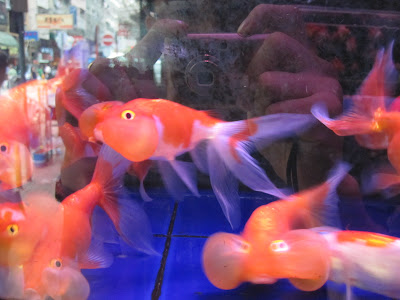 I hadn't seen this breed of goldfish before. They have billowing skin bags puffing out under their eyes. That's what happens when you sneeze with your mouth closed. 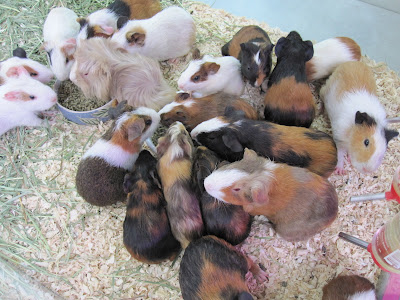 Oh, and guinea pigs. One of my favourite kinds of pet. 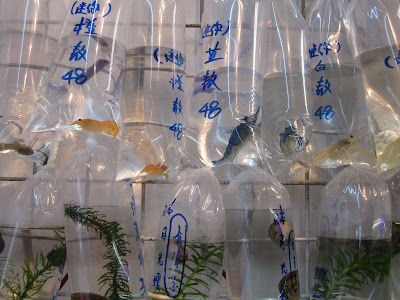 Shrimps, snails and sea urchins were all for sale. I think the shrimps are actually food for exotic molluscs that people like to keep. 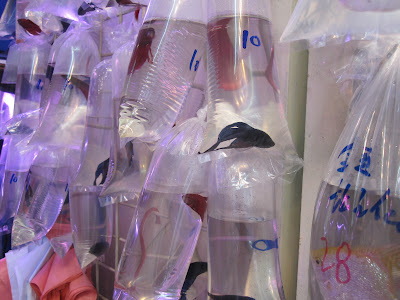 And these are Siamese Fighting Fish. In Australia, one of these will set you back around $45, but in Hong Kong they are HK$10, which is around one dollar something.
These fish live in small rainpools in tropical areas and the males defend their diminishing territory viciously. Placing two males into the same pond will result in a fight to the death.

Much to the bemusement of the betting men who placed them there. 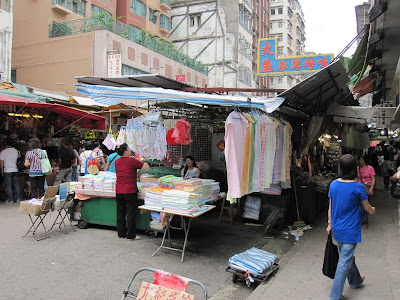 We made a large circle around Kowloon by foot and ended up back at the markets. We'll continue on from here in the next post.

I'm going to divide up the posts into chunks around this size and post when I can. Life back in the lab is busy, and not nearly as exciting as these photos. But it's fun looking back on our trip and I'm looking forward to sharing the rest with you.

All in good time. See you soon!