Skip to main content
A couple of hundred years before the British colonised Hong Kong, the Portugese were already in Macau under a slightly more amicable agreement. Macau was once a major trading portal for South East Asia, but declined in that role and has since become more famous for its casinos. 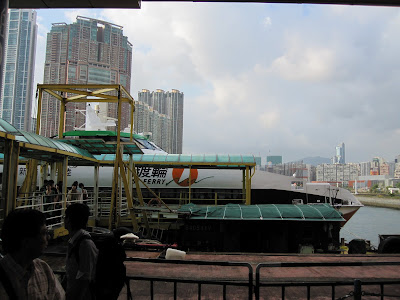 The best way to get from Hong Kong to Macau is by ferry. There are a few different services, but they're all around the same price. The trip takes about an hour and if you have a Hong Kong tourist visa, it's very simple to go to Macau. 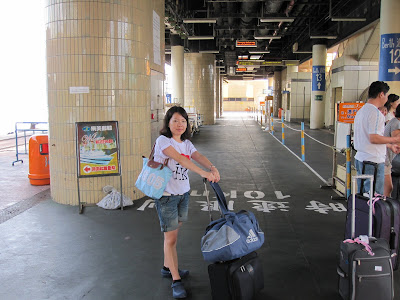 You don't need to reserve tickets beforehand, because there are ferries departing every 30 minutes. You just pay for the ticket (around US$50) and an hour later you can board with your luggage. 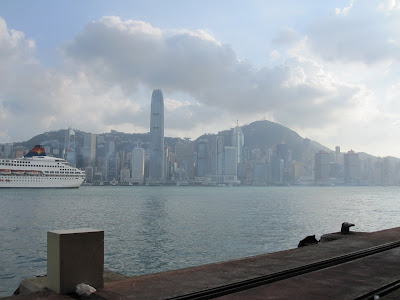 Macau does have an international airport, but it's only popular with the richer crowd. Departing by ferry also gives you some better sights of both harbours. 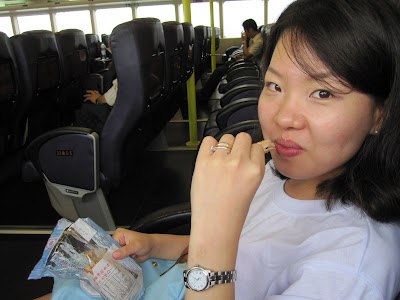 As soon as we got on the ferry, Heather spotted a packet of dried squid for sale behind a counter. But they wouldn't let us buy it until the ferry left the port, so Heather sat down and did a good job pretending that she was thinking about other things, beside the squid. But I know Heather pretty well. Some people get dollar signs in their eyes when they think of money, but Heather gets little squid silhouettes when she wants to eat dried squid.
As soon as the ferry left port, she had the squid in her hands and was munching gleefully. Late at night, squid parents tell their squid children about the Heather Monster. 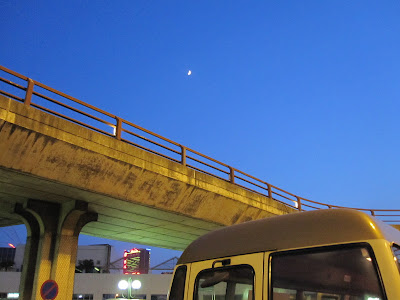 The first thing I noticed about Macau was the blueness of the twilight sky. I was so used to the grey skies of Seoul that I had forgotten about its usual pleasant tones. 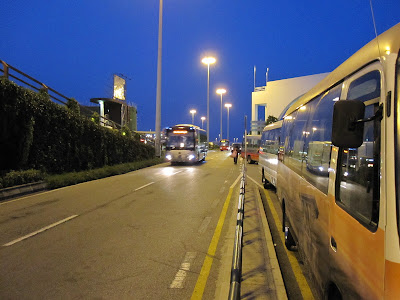 Hotels and casinos are big business in Macau and shuttle buses constantly arrive at the ferry terminal to transport new guests to their destinations. At the bus station you can roughly gauge how popular your hotel is, just by seeing how frequently the shuttle buses arrive. For the Venetian Hotel, buses come every couple of minutes. We had to wait around 45 minutes for ours. 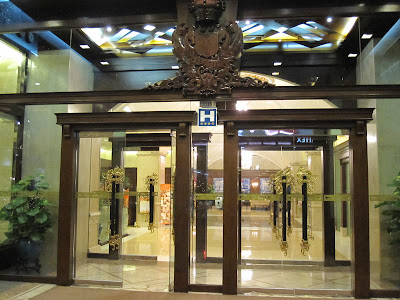 We stayed at the Casa Real Hotel, which was pretty good in the end. A nice room with breakfast will put you back around US$130 per night. 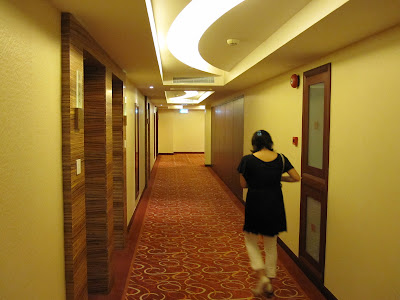 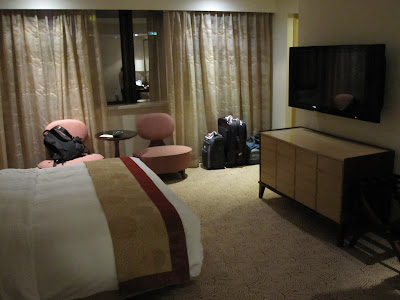 I usually don't like to spend a lot on hotels, because we're normally out for most of the day anyway. But I spent a little more on the honeymoon just because. 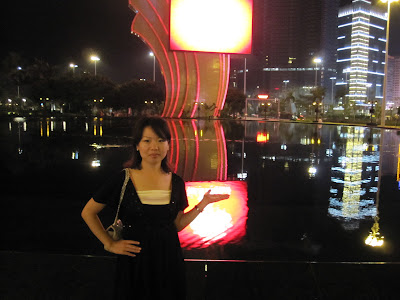 As soon as we dropped off our luggage, we went out to have a look around. Macau itself is smaller than Hong Kong, and it similarly has both a peninsula and an island. 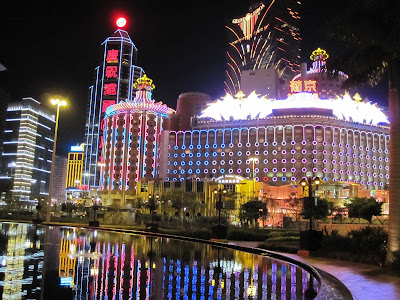 The first thing you notice about the city is an abundance of neon that one may previously have believed could only be found in Seoul. 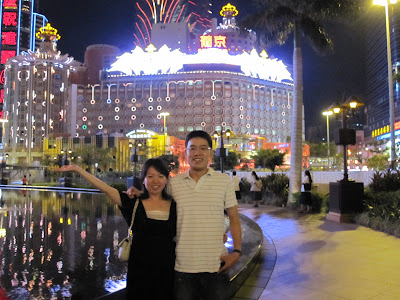 What do we think of Macau? Small and dazzling. 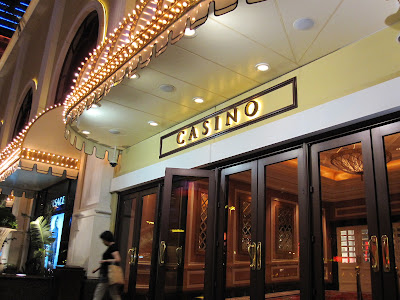 Macau has historically been a gambling destination, as the Portugese government introduced relaxed gaming laws centuries ago. There are about 11 major casinos in the city and probably around 40 other smaller ones. 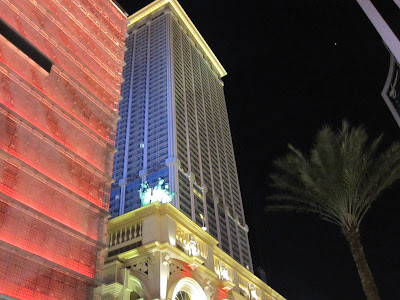 This hotel is called the L'Arc New World. It opened on the week we arrived and is currently the tallest hotel in Macau. 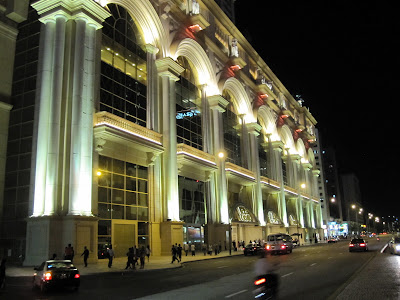 Coincidentally, the general manager of the L'Arc is my old Casuarina boss from Adelaide, Peter Ng. If you look back through the archives of this blog to 2007, you can see his old hotel where I used to teach, which was at The Seacloud in Busan. If we had come on any other week except opening week, we probably would have stayed here. 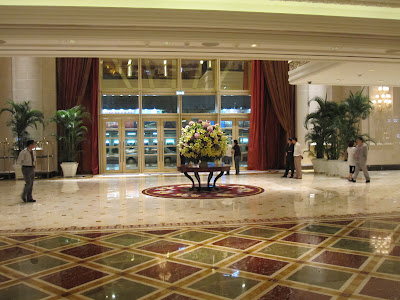 This is the lobby of the hotel. We'll come back here in a later blog post. 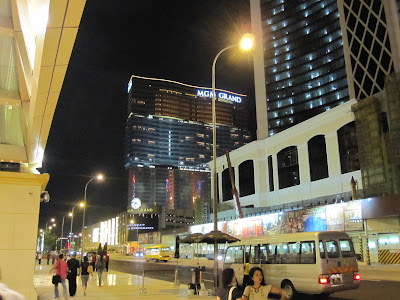 All the big name hotels from Las Vegas are now in Macau, including the MGM Grand. In terms of gambling quantity and number of tables, Macau has already overtaken Vegas and continues to grow. I would attribute that to a more ingrained gambling culture in the Chinese tourists who make up the majority of visitors. Luck is a prominent part of Chinese culture, with all sorts of symbolic things considered lucky. And when you have enough people believing in luck, there's money to be made. 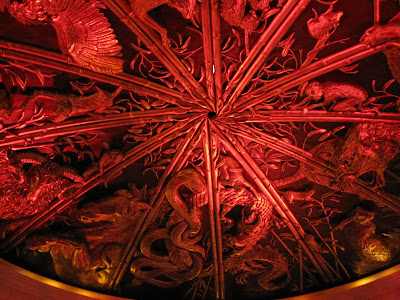 But one good thing about lots of people spending money is that the casinos have reinvested a small portion of that into free attractions. In the lobby of the MGM Grand is this display on the ceiling, representing the heavens. It's much larger than it looks in the photo. 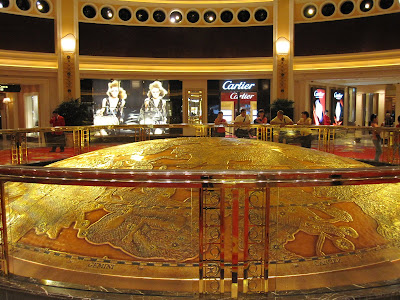 Directly underneath it is the Earth. The whole display starts moving at 9pm every night and people crowd around to watch the show. 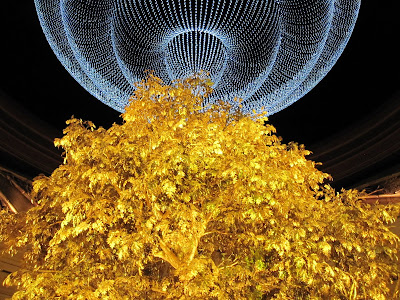 The ceiling opens up to reveal an enormous LED display, and from the ground emerges the Money Tree. On some nights, the tree comes out, and on other nights a large golden dragon comes out instead. 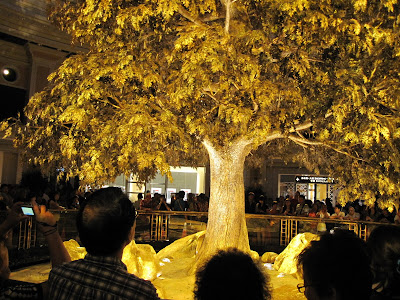 It rotates slowly in its dazzling glory and people throw coins at it for good luck.

Here's a slightly long video of part of the show. Love them or hate them, the casinos of Macau know how to impress people with a good show.
More of that coming later. See you soon!