Skip to main content
On a recent Sunday morning wander through the streets of our neighbourhood, Sarah and I came across a vendor selling egg bread, or Gyeran Bbang in Korean.

My first experience of egg bread was when a student brought a huge bag of it in to share with the class. Feeling the 4 o’clock hunger beginning to gnaw at my insides, I subsequently broke my “no food” rule and allowed them and I a brief afternoon snack before tackling the finer points of English Land 4.

On that occasion the bread was fluffy and ever so slightly sweet, a good foil to the richness of the whole egg that lurked inside waiting to pounce on you with its just-cooked consistency. I remember thinking that if I just had a rasher or two of bacon and some hollandaise sauce that would be me for the day – the kids could teach themselves.

That day passed and although I often saw the egg bread cooking away in the street by our school, I never again indulged. Until I saw this chap that is. 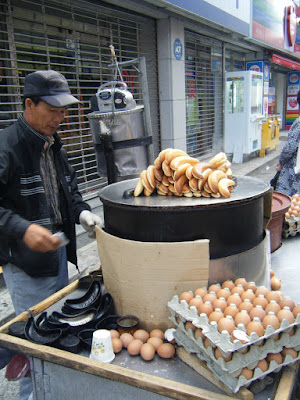 Casting my mind back that Eggs Benedict moment at school I thought I could perhaps regain some of the Sunday glories of yesteryear and promptly ordered one. Unable to buy just one however, I resorted to purchasing three for 2 chun, not a bad price but unfortunately more egg bread than I was after. 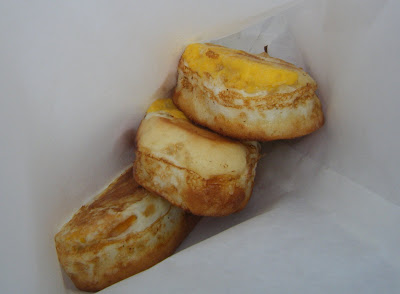 As it turned out in this case quantity was no substitute for quality; the bread was overly sweetened and had the consistency of a twinky, much too chewy and artificial for my liking, while the egg itself was unfortunately more than a little overcooked. The combination meant I abandoned the first one less than half way in and had to resort to yet another act of forced littering, abandoning my charges on a wall before legging it in the direction of Dongnae subway station.