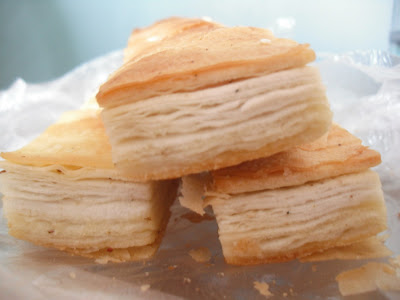 The summer after I finished school I worked for a time at Belfast's Asian Supermarket. Whilst there I stacked freezers, lugged sacks of rice and put together orders for the city’s numerous Chinese restaurant owners. During this time I also became acquainted with Tsingtao, the German founded beer hailing from a city of (almost) the same name in Eastern China.
My acquaintance with this particular brew developed over the years and when I started researching our China trip I found that a visit to Qingdao would not only yield a trip to the brewery itself, but would also give us the opportunity to view some fine German colonial architecture to boot.
When I got there however, I soon found out the yeast had been busy in other ways too. Apart from the buildings and the beer, Qingdao is also possessed of some of the finest bread and pastry I’ve tasted during my time in Asia, much of it sold from open-air street bakeries and food stalls.
My first encounter with what is perhaps Qingdao's second most valuable asset, was at a hole in the wall pie shop. This unassuming set-up located some way away from the city centre sold pork and beef pies, charged with spices and encased in a flaky buttery pastry, the like of which would give any sausage roll or Steak and Guinness pie a run for its money.
Later, when perusing the market close to our youth hostel I discovered some other fine specimens. Ever had a pie lid that tasted so good it outshone the filling and left you lusting after more of the same? These long rectangular pastry fingers would probably have done the trick. Constructed from layer after layer of thin filo-style pastry and served warm and bready, these ubiquitous beauties were a staple of our time in Qingdao.
Also prevalent were a variety of flat breads. These ranged from thick doughy foccacia style offerings seasoned with salt and pepper and brushed with oil, to thinner more pliable versions similar in texture and appearance to potato bread and strongly flavoured with garlic and green onions.
Everywhere I looked there were people selling small cakes, biscuits, or buns so freshly cooked to eat them straight away would be to risk severe burning. The buns, paired with some sliced German sausage from a street side salad stall made the perfect sandwich, one that was repeated several times on the nightmare 20 hour hard seat overnight to Shanghai!
With all that bread going around, I didn't even have time to think about beer.