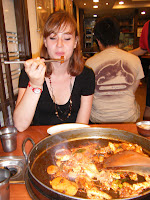 On our first weekend in Busan, my cousin Steve and his girlfriend Vicky took us to a Galbi restaurant. Since then, the thing has kind of snowballed for me and the Duch, culminating in the infamous "day of two Galbis."

As you might have guessed, Galbi is damnably good, and a typical experience could be described as follows:

You arrive at the Galbi restaurant with your companions and are immediately hit by the distinctive sounds and smells of sizzling flesh. As you breathe in, the aroma permeates every cell in your body, turning your mouth into a swimming pool and pulling your belly up into your chest. By the time you reach your table you are about 100 times hungrier than when you were at the door, a situation exacerbated by the visual effect of Galbi being consumed heartily all around you.

You sit down at the table, and after a cursory glance at the menu the Korean amongst you orders for everyone. If there isn’t a Korean amongst you don’t worry – these restaurants basically serve one thing and God gave you fingers for a reason. After the order has been dispatched you attempt polite chat but it’s hard to concentrate. You pick at the Kimchi (fermented cabbage in chilli sauce) with your chopsticks and prod a few other side dishes distractedly.

Just as your stomach starts calling you names your server arrives with a big plate of chicken marinated in soy sauce, sesame oil, chilli and garlic (I think) and slides it into the smoking circular pan in the middle of the table. It instantly hisses into life, popping and spitting and catching as your server kneads the chicken around the pan expertly with two great big wooden spatulas. It cooks like this for 5 minutes or so, your server every so often returning to massage it until, with a final flourish, he sets the spatulas to one side and turns down the heat. It’s now ready to eat.

Delirious with excitement, you extend a pair of trembling chopsticks into the pan, pinch a piece of chicken and place it on a sesame leaf along with some thinly sliced onions from your bowl of soy sauce, and a dab of spicy bean paste. You then wrap up the whole neat little bundle and pop it in your mouth in one go, taking care to allow a dribble of soy sauce to run down your chin. The finely serated sesame leaf, lightly perfumed and almost sweet tasting competes ably with the deep, brooding heat and flavour of the chicken, which you find particularly tasty where it has charred and become semi-stuck to the pan.

This process is then repeated until about half the Galbi has been eaten, at which point rice is added to the pan followed by – if you are that way inclined (and I think you are) - cheese. The rice has the effect of turning the pan into a great big paella type thing, while the melting cheese, although admittedly an odd addition, binds the whole mixture together perfectly into lovely chopstick-friendly clumps.

An indeterminable amount of time passes, you rediscover your companions, then without quite knowing how you got there you find yourself at the till making patting motions appreciatively and paying another ludicrously small amount.