Marvin Smith is a legend within the Northern Soul and Soul Circuit. (Yes, I do use the present tense to describe him because in so far as I know he is still with us.) I could give you his full resume, but you can easily google his name to find out that information.

Suffice it to say that he was a fixture throughout the 60s Chicago soul scene and most noted for his involvement with “The Artistics,” a soul group that put out a handful of LPs and 45s on local Chicago labels (Okeh and Brunswick).

The 45 you see before you is the second to last 45 that Marvin ever cut. This soul gem is on the Mayfield label, another Chicago label owned by the one-and-only Curtis 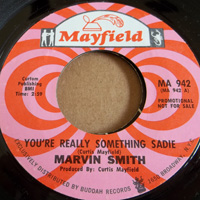 Mayfield. (The influence of Curtis Mayfield on the soul scene, past-present-future, is undeniable. You will surely see him mentioned in future Funky Seoul Corners…) If you look at the 45 closer, you will also see Mayfield’s name listed as both the producer and the writer of the featured track, “You’re Really Something Sadie.”

In searching on-line for information about Marvin Smith and this tune in particular I ran across a site unknown to me before called manifestosoul.com. On the site was an interview with Marvin Smith conducted on May 2, 2009. As I read the interview I came across the following tidbit about Smith’s introduction to this week’s featured track. I figured I would let Marvin Smith do the talking:

“It was 1967 and I thought I’d hit the big time, but Curtis was so busy, that it was at least a year before I got a record out. They were in the studio one time and I walked in. I was thinking ‘hey, I’m your artist now and there’s nothing happening’. They were recording “You’re Really Something Sadie” and when I went in the track was playing. I told Curtis that I liked the track and I guess he felt guilty. He said ‘Do you want to try it?’ and of course I said ‘Yeah’. So Curtis, along with Fred and Sam of the Impressions, put some words down to go with the music and played it a couple of times. I’d never heard that song before but after two takes I had it. I tore that song up. All I could think was that this is my chance so I blew that song out. The other side was “Who Will Do Your Running Now” and I got the Impressions in the studio to do the backing for me. By sheer chance, maybe because I had been on before, the record got sent to the Dick Clark show. They had a feature called ‘Rate A Record’ and the kids gave me 95%. I really thought I’d made it. I went round telling everybody that I’d got a new song and that it was going to be a hit. Once again there was no promotion and from that day on I never heard it on the radio or anywhere else for that matter. It was just like history repeating. About a year later, Curtis wrote me a real nice letter saying he was sorry that he couldn’t dedicate more time to me but I guess he was concentrating on getting his own stuff together.” (Interview with Steve Handbury May 02 2009 manifestosoul.com) 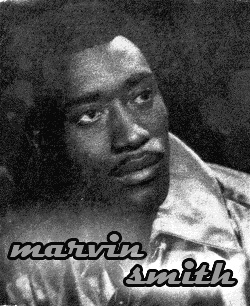 Smith’s account is interesting on three levels. First, from what he said, we can estimate that this 45 was released sometime around 1968-69, maybe even 1970. I tried to find a reliable source to determine its exact year of release, but to no avail. Smith’s account is as close as I could come. Second, in talking about “You’re Really Something Sadie,” Smith claims he “had this song down and tore it up” after two takes. Two takes, ladies and gentlemen, even though he had never heard the track before! Now, not just anyone can get the soul, the feeling, that Marvin projects throughout this track in two takes—that’s lifetime experience. And quite frankly it’s this kind of experience that most artists hope to achieve but never do. Finally, I found Smith’s story to parallel that of so many soul and funk recording artists throughout the 60s and 70s. Great artistry plus no promotion equals artistic grief, sorrow, and poverty. Once the tune was committed to wax it was out of the hands of the artists and into the hands of the musical administrators and bureaucrats. But small labels like Mayfield just didn’t have the resources to visit the radio stations and the record stores to draw attention to their artists, certainly not on a national level, which is what you needed back in those days to create hit records and to make money. Smith himself laments “it was just like history repeating.” So he had been there himself once before. He created a great product but no one came to celebrate—an all too common ailment within the artistic community.

Well, Marvin, I’m trying to do my part here on Funky Seoul Corner, even though it is forty years too late. While I can’t send you any royalty payments, I can spread your message. Perhaps a person will check out the blogzine Three Wise Monkeys and say, hey, what’s this Funky Seoul Corner all about? Hopefully they’ll click on Funky Seoul Corner #8 and say, hey, who is this Marvin Smith dude? Man, what a voice! Man, what an arrangement—you’ve got the strings sustained throughout the tune, you’ve got the bongos in the background and snippets of the wah-wah guitar, and you’ve got the stabbing horns piercing at the appropriate times. Man, what a track! And perhaps they’ll take the time to find learn more about you and the music you made.