Skip to main content
It was Heather's birthday last weekend so I went down to Busan for a visit. Luckily I managed to schedule my experiments so they'd be running over the weekend. 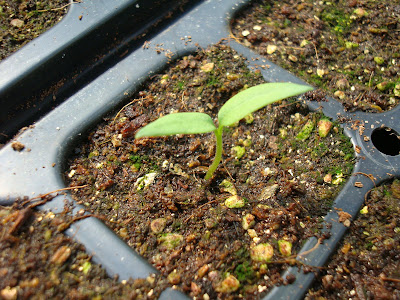 Here's a two day old capsicum seedling growing in the greenhouse. Upon seeing this photo, any self-respecting plantologist would instantly recognise that this plant is a dicot. A dicot means that when the seed first germinates, two 'leaves' sprout out. Rice and most cereal crops are called monocots because they germinate with a single cotyledon. All of the plants in the world are categorised as either monocots or dicots. If you ever manage to find a plant that germinates with three cotyledons, I guess you could call it a tricot.

You would also be famous. 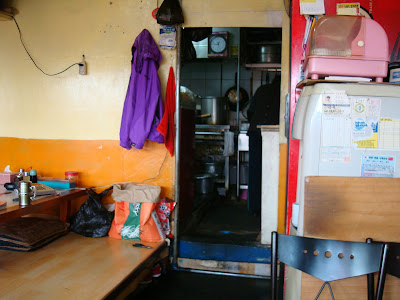 Every Wednesday I'm rostered on to go to the greenhouse and water the plants. Being the mildly-adventurous diner that I am, I went exploring last week to find a new place to eat. Tucked away in suburban Suwon, I found this small traditional Chinese restaurant. A lot of places like these are just extensions of people's houses. 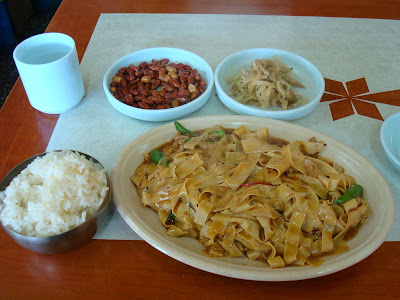 I was the only person in the restaurant, and funnily enough the elderly couple that run the place spent a good five minutes trying to convince me to eat elsewhere. That pretty much convinced me to stay. Here's an excerpt from our conversation:

After sitting down and finally getting a menu (which had no Korean or English writing), the elderly woman recommended her specialty in the photo above: tofu noodles. The noodles themselves were made of dried tofu and the sauce was nice and tangy.

I'll be eating back there again next week. 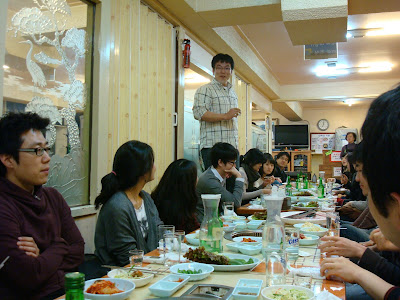 Four times a year, the students from our floor of the building all get together and have dinner. Standing up in the photo is a student from the virology lab, about to propose a toast. Our floor of the building has labs that all focus on plant disease. There are the virologists, mycologists, nematologists, clinical plant pathologists and our lab, the plant bacteriologists. And upstairs are the entomologists.

Who knew that plants had so many diseases? 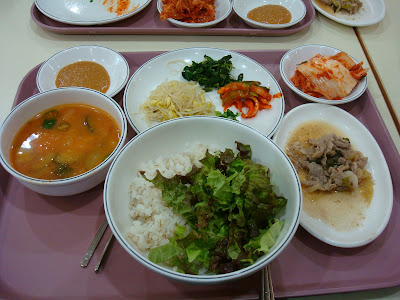 For some reason, the food at the university cafeteria is always a little different on Saturdays. It's usually a mixed-rice dish, which I suspect is due to there being leftovers from the week. The taste is fairly good though. Even though our lunch break only lasts 30 minutes, it's still something to look forward to. 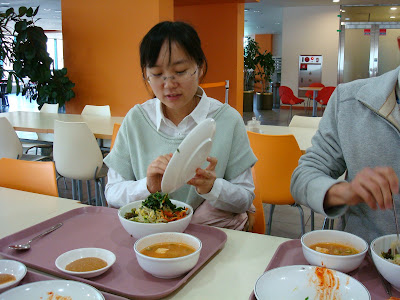 Here's Chen Jing, showing the LKB readers the correct method for putting the vegetables on top of the rice. I was looking over Chen Jing's shoulder one day and on her computer bookmarks list, I saw my blog. Three cheers for Chen Jing! 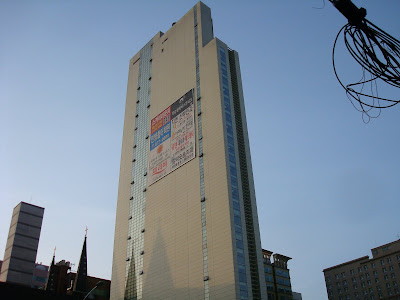 This rather oddly shaped building near my place is a product of space constraints here. The reason it's so narrow is because land in front of the university is incredibly expensive, and the tightly packed neighbours of this building obviously didn't want to sell. I can't help but think that it looks like a Playstation 3. 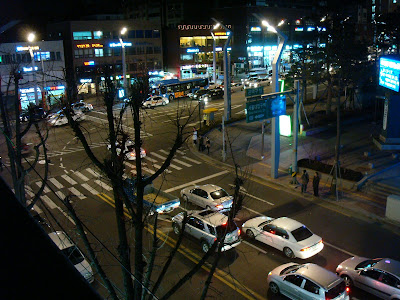 On the roof of my koshiwon is an open area to hang laundry. Due to my timetable, I'm usually doing mine in the early morning or late at night. There's a pretty good view of the street below and it's good to have laundry as an excuse to mill around and watch the happenings below. 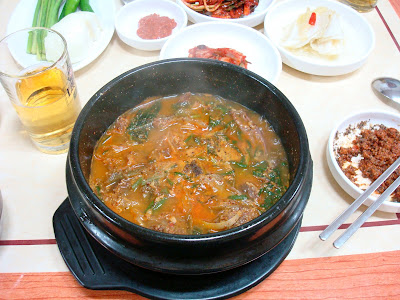 Last week I tried dog soup, of which Korea is somewhat notorious for. Dog meat is not very popular here at all, but it does have a niche market which is primarily composed of men who think it bestows some sort of masculine vigour upon them. I'd been meaning to try it for some time now, but never got around to it.
I had a minor moral dilemma before deciding to go into the restaurant, but my moral resolve was insufficient to outweigh my curiousity. I like dogs, but then again I also like horses and kangaroos. Now I've tried all three.
The taste of dog is pretty bland, which is why the recipes most often have a lot of flavouring added. It also has some quite fatty bits which I didn't find all that appetising. The texture and flavour are most similar to beef, but not as good. I'll be perfectly happy living my life without ever eating it again. 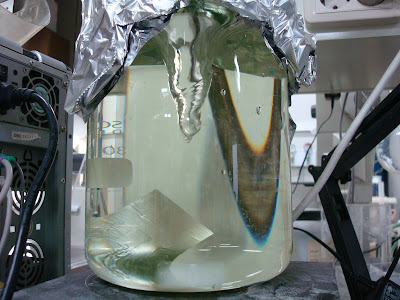 Here's a very large beaker in the lab with three litres of nutrient water for growing yeast. Often when we make solution like this, the powder takes a long time to dissolve. Normally it would take around 30 minutes of constant stirring with a spoon for it to be ready, but nobody wants to be standing around for that long. So what we do is drop a plastic covered bar magnet into it. The magnet turns when we put it on top of a machine that applies a spinning magnetic field to the base. In the photo you can see the little maelstrom being caused by it. The whirring and clinking of the machine in action is rather relaxing, I find. 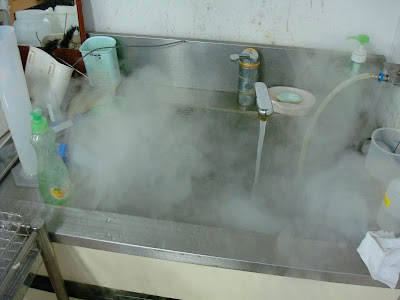 Dry ice and liquid nitrogen are two things in the lab that I never seem to get bored of. Sometimes the enzymes that we order come packed with dry ice to keep them cool. If you mix that with some water, you get a cool mist in the sink. While the older lab members tend to roll their eyes at such silliness, you can always be sure to attract the inquisition of newer students. Chen Jing was fascinated.

If you add detergent and hot water, you get so many bubbles that it overflows onto the floor. 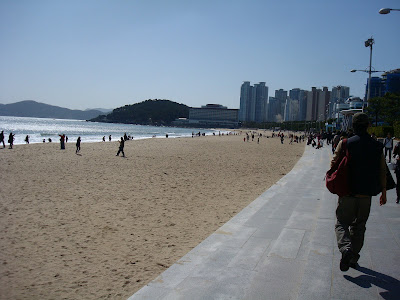 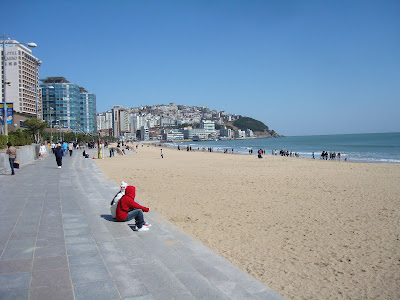 On Saturday it was Heather's birthday so I went down to Busan on Friday night. This was my first break from the lab and I've been pretty much flat-out since I began in Seoul. Seoul is nice, but Busan is still my favourite city. Even though I live near the mountains in Seoul, the air in Busan is noticeably fresher. 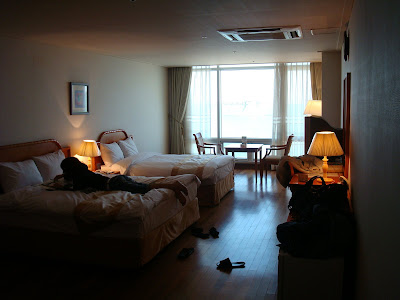 Anthony, being the nice guy that he is, paid for a hotel room for us right on the beachfront for Heather's birthday present. The room was about 20 times larger than my current accommodation. Thanks Ants. 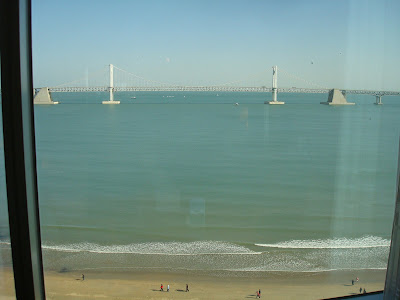 This was the view out of our window. Anthony's apartment is in the building next door. Teaching English in Korea and having a view like this every morning is something worth considering. 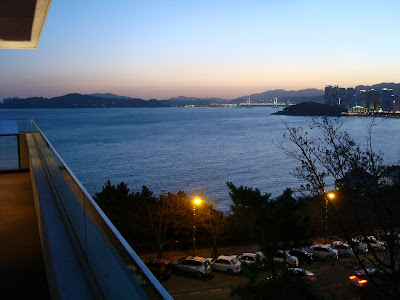 On Saturday night we had dinner at The Kitchen up on Dalmaji hill. This is our favourite restaurant in Busan, and it's where Heather and I got engaged last year. 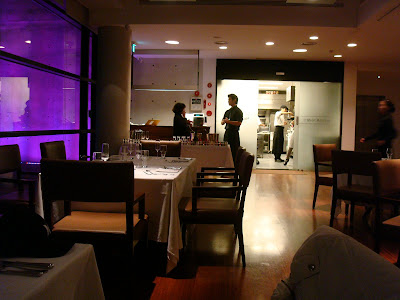 We had a special set menu for 'White Day', which occurs one month after Valentine's Day here. In Korea on Valentine's Day, the girls tend to give boys presents. Then on White Day, it's the boy's turn to give presents to the girls. Heather's birthday happens to be on White Day, which is convenient. 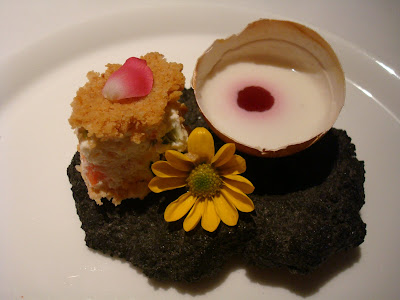 The first dish was an appetiser with a little egg omelet and some sort of creamy concoction in an egg shell. It was supposed to resemble one of the islands of Korea, although I can't remember which one. The base was made of pure blackened salt, but Jef and I thought it was edible. So after we took a bite of that, we had a rather unpleasant surprise. The rest of it was okay though. 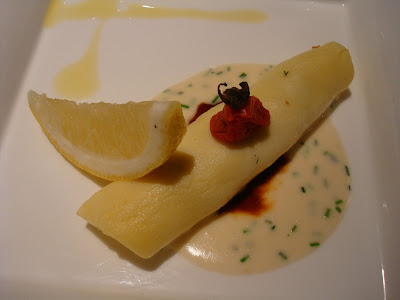 Next was a crepe filled with minced crab. It was good, but the dried cherry tomato on top was more up my alley. 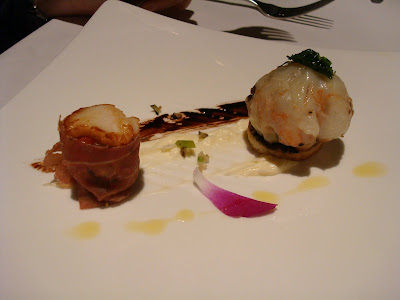 Heather had a different set course to me, and as usual her choice turned out to be more appetising than mine. Here's her stuffed lobster tail entree'. 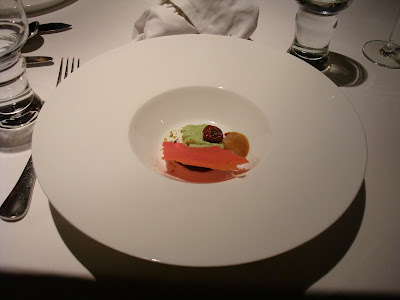 I'd always pondered photos of dishes like this in magazines. The usage of oversized plates seems to me to be an unnecessary hassle to the dishwasher. But then again, I am a little dishwasher-centric in my restaurant thinking because I did it for 3 years. Dishwashing itself can be quite relaxing if you know how to enjoy it. I heard that the warm water helps to relieve stress.

Anyway, this dish was a subtley flavoured zucchini pate'. 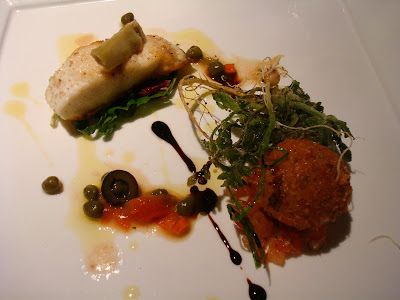 Then came the fried fish and some sort of seafood ball. The greenery in the photo was an entire plant, roots and all. It was pretty good. 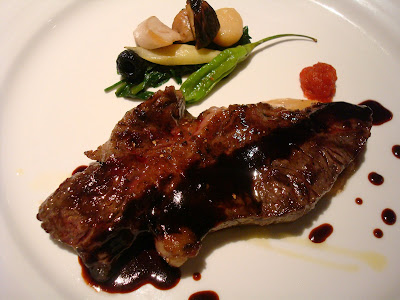 And the main course was steak. I myself am not a huge steak eater but this one was okay. Perhaps a little too fatty.

All in all the meal was nice, but I prefer the regular menu that they have here. It was about $60 per person which is quite different to my regular $3 school cafeteria dinners. Luckily for Heather and me, Daniel paid for us. If you're ever in Busan and are looking for some fine dining, try looking for 'The Kitchen' up on Dalmaji Hill. It's very close to the Vesta bath house. 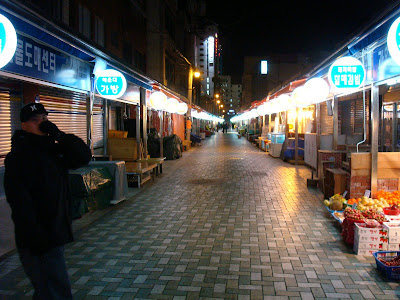 They've developed a lot of the beach areas in Busan, including the Haeundae market. Now there's new paving there and every shop has a sign that matches. It looks nice, but I also liked the clamour and disorganisation of the old market. This is the view that we woke up to on Sunday morning. If you're wanting to stay beachside in Busan, remember that Gwangali is usually less crowded and a little cheaper than Haeundae, but right next door.

For Sunday lunch we ate with Heather's family. I hadn't seen Ji-Ye for a good three months, so we had a lot of catching up to do. Ji-Ye is now perfectly aware that my Korean isn't very good, so she'll often stop in the middle of sentences and ask "Understand?"

I used to say 'no' a lot, but I've realised that her stopping to explain things in detail (which she's more than happy to do), often leaves me even more confused. So these days she'll just be rambling on about things in Korean, with me nodding.

Her language abilities have improved so much it makes me feel bad. But I'm still better at English. So there. 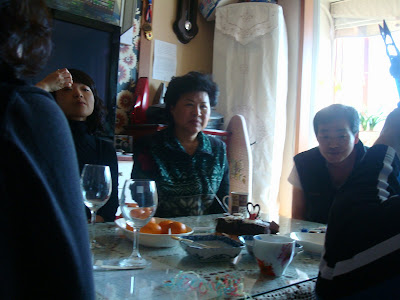 Heather's mother's birthday is one day after Heather's, so we had a cake to celebrate with her. She cooked a nice traditional Korean lunch for us, with tofu soup, grilled beef and a plethora of side dishes. In Korea, it's common to give parents money for their birthday. But it's also common for parents to give children money when they leave for a while. So I gave Heather's mother some money for her birthday, only to have it kindly returned with an extra $10 more when I left later that day. 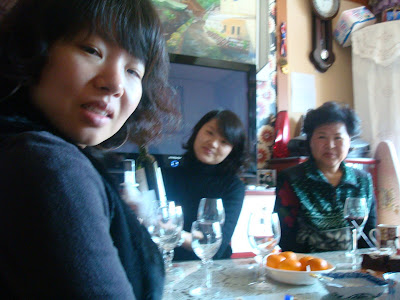 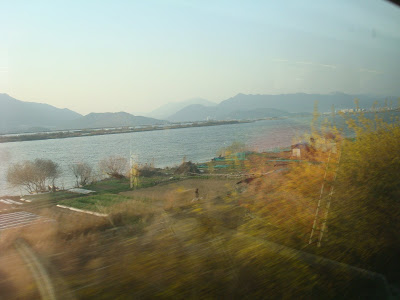 And then it was time to head back to Seoul on the KTX. All of the economy class tickets were booked out, so I had to get a business class seat. I love it when that happens. Business class is around $10 more, but there's more leg room and better seats.

So yeah, happy birthday to my hunni and Heather's mother. Thanks Anthony for the room, thanks Daniel for the dinner and thanks to Jef and Niko for the company. I'll be back again someday.

See you next time!

I am sad to hear that your curiosity bet out your morals. I hope more people feel the opposite and never try eating dog soup so that the people who torture, beat and murder pet dogs, go out of business. It is a shocking practice.