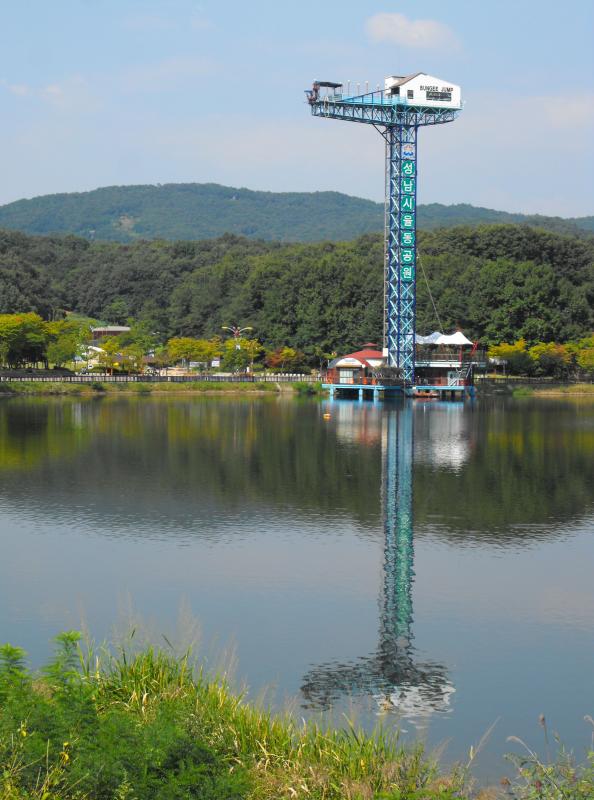 Yuldong Park is somewhat known for being the only place to bungee jump in the area - but there's plenty more to do beyond jumping off with a giant rubber band attached to your body. Opened in 1999, the park offers a large lake, a 4km walking trail around said lake, and a few surprises up the hill. 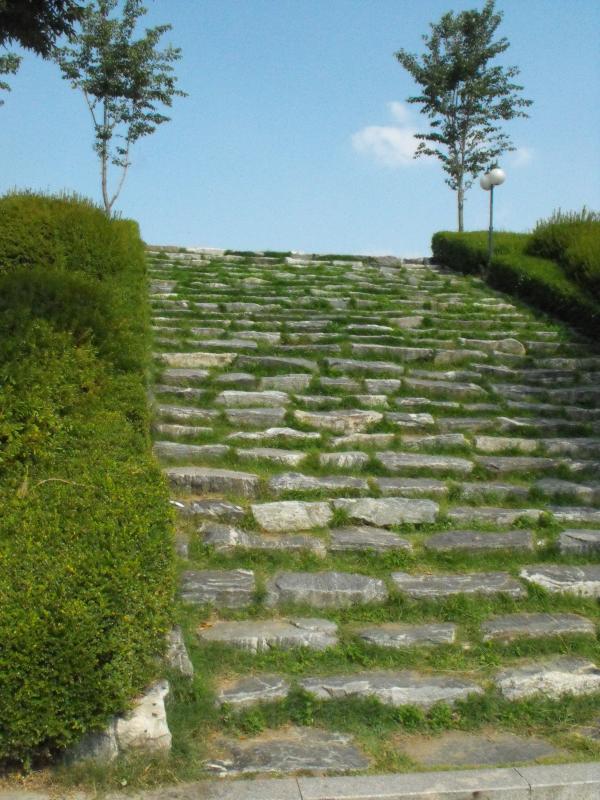 Start by getting to Bundang, through the large parking lot, and up one of several sets of stone stairs - the lake is visible from the top. Turn left, and begin enjoying the view of the lake along with the walking trail that goes around it. 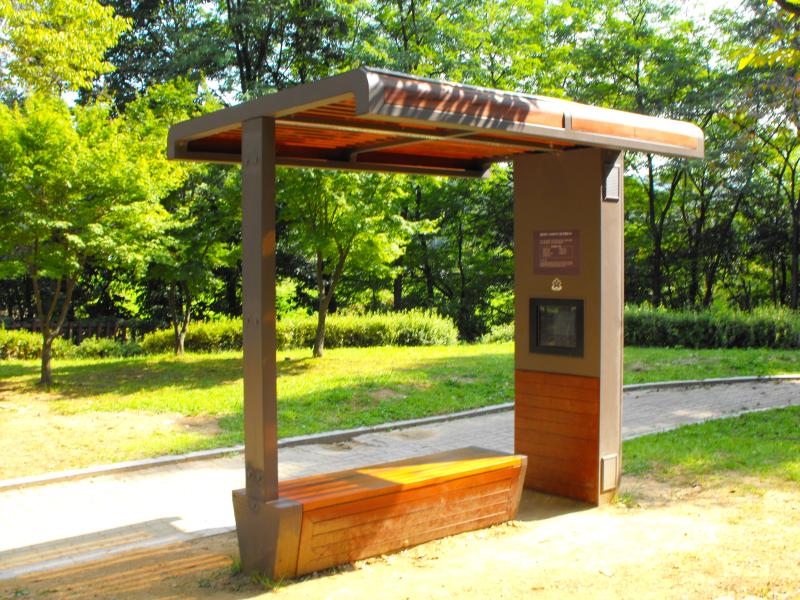 An interesting bench - with a computer built-in to the side! Touch the screen to listen to popular music of various genres; there's something a little odd about listening to Jamie Cullum's 'I'll be home for Christmas' in the middle of a Korean park... 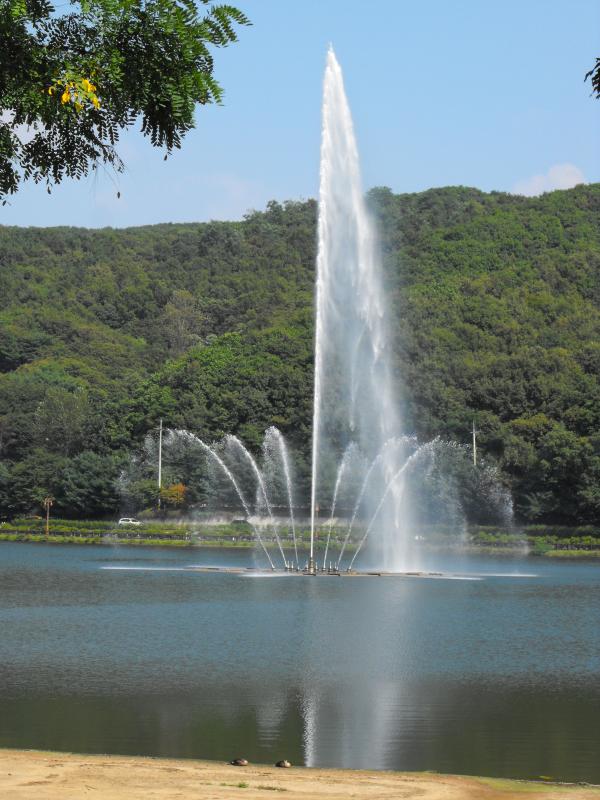 A very impressive fountain in the middle of the lake. While not on all the time, it would start spraying around 100 meters high every 5-10 minutes. 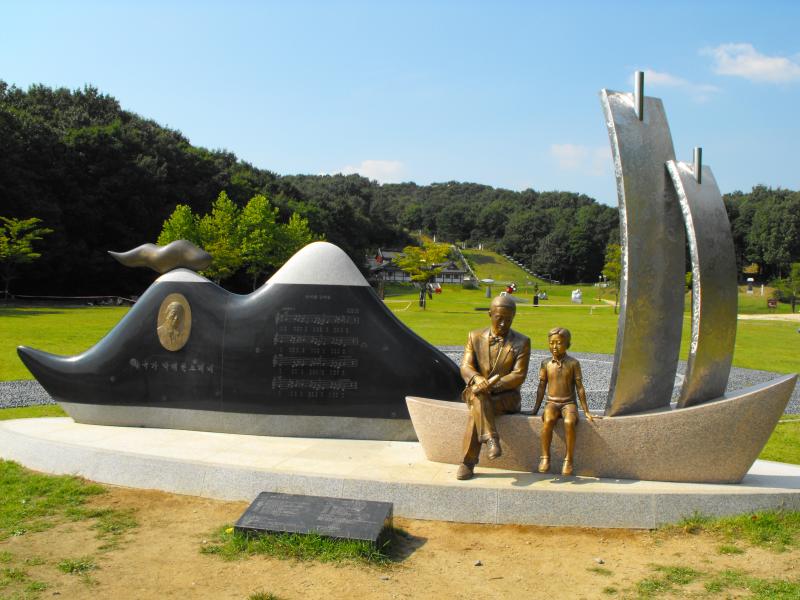 The opening of a sculpture park - in case all other forms of musical notation don't survive, this one will. 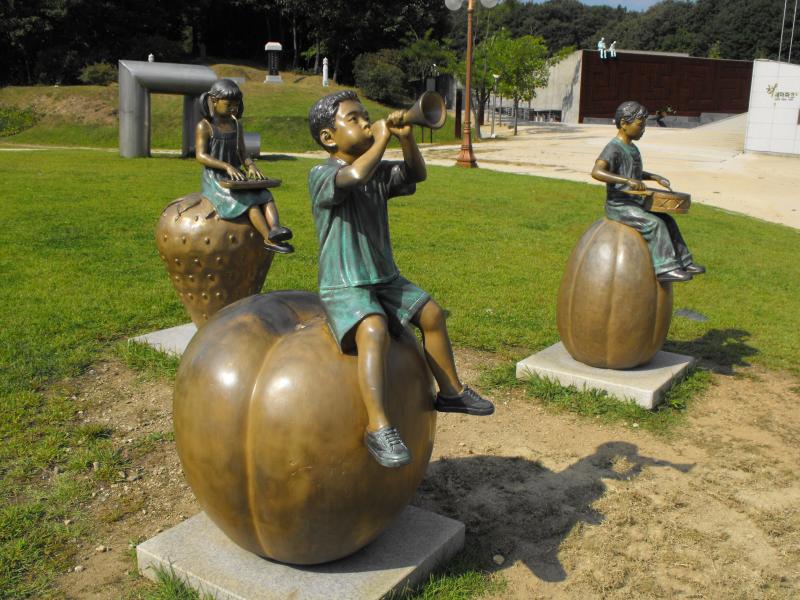 Quite a few interesting pieces in the sculpture park. Not pictured is a recreation of Venus De Milo, along with some other abstract art. 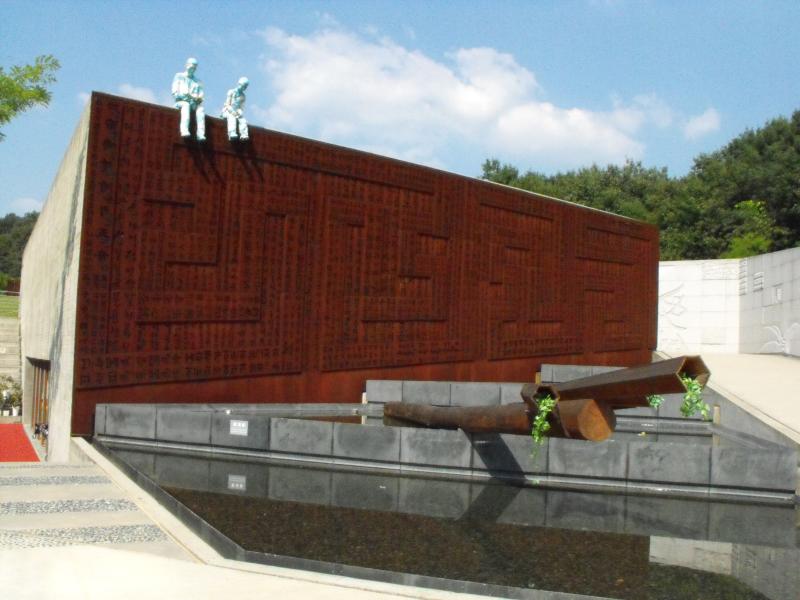 What the heck? The signs proclaim this to be a 'Book Theme Park' - or a library for the rest of us. From the brochure: "The unknown is great and the human's effort to reveal the unknown results in bringing beautiful state of peace. The Korean book mural materializes this peace." My red pen just started shaking horribly... 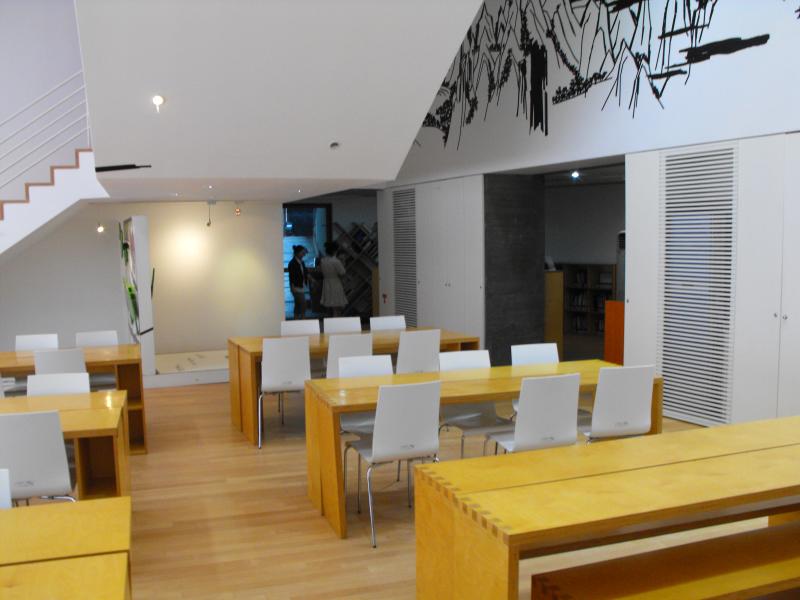 The inside is fairly standard for a library, and books appeared primarily for Korean children. A brochure in English picked up here helps with the names and purposes from here out. 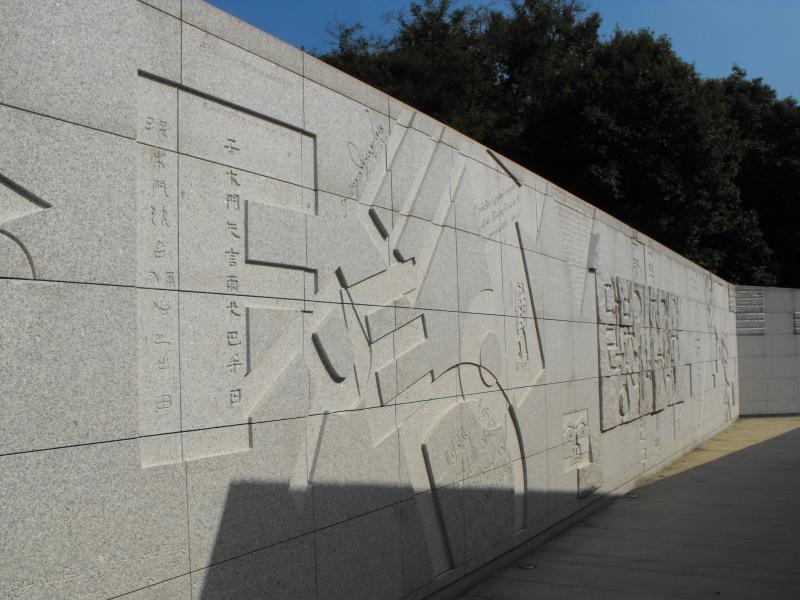 The facility as a whole dealt with books and the art form in one way or another. Engraved in stone are characters from many languages, in different sizes and fonts. This particular mural went around like a corkscrew on the roof of the library - er, 'Book Theme Park'. 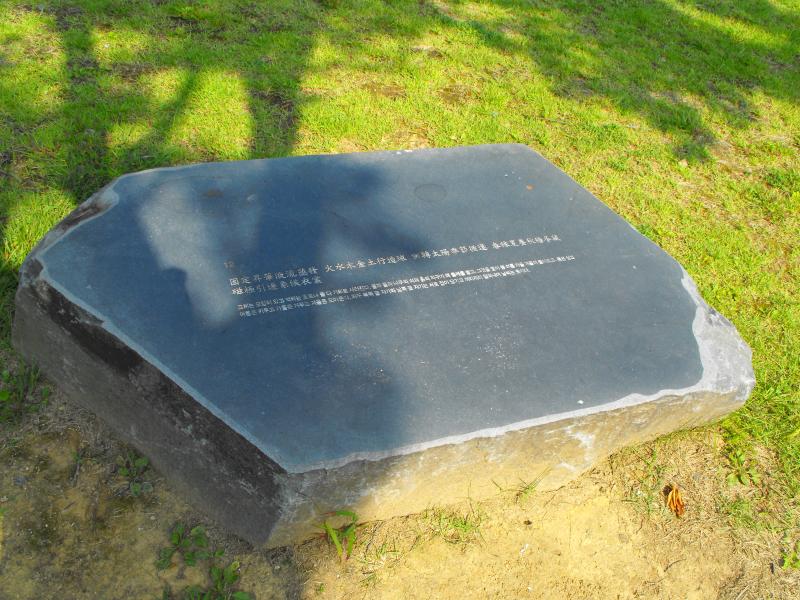 Now behind the Book Theme Park - a number of nicely polished stones with something carved in Chinese and Korean. According to the brochure, the benches "are engraved with 8 character poetic structures that help to improve the ability to put Chinese characters together...." Interesting - though I really hope the bench is not the most interesting thing to read in the place. 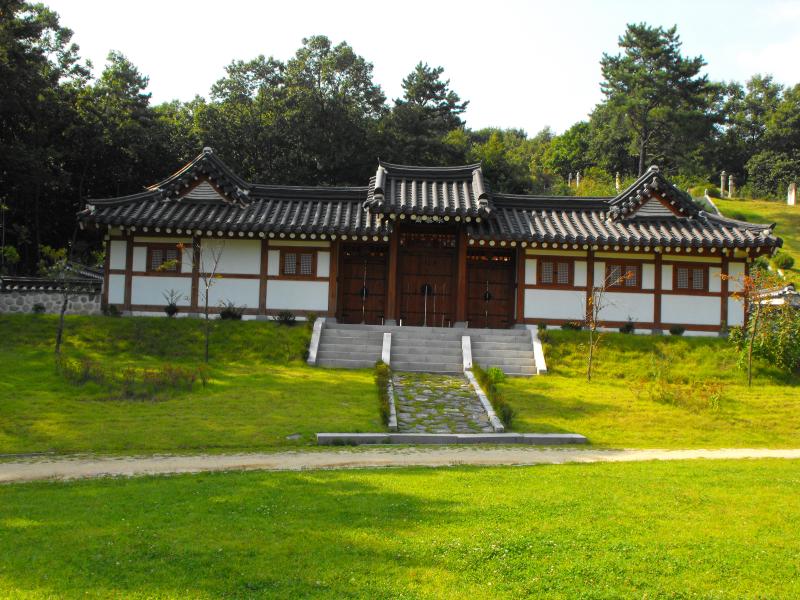 A bit of a mystery - what looks to be the front of a traditional Korean house, but is locked and closed up. There's a fence to the right (locked as well), with an intriguing set of stairs behind it: 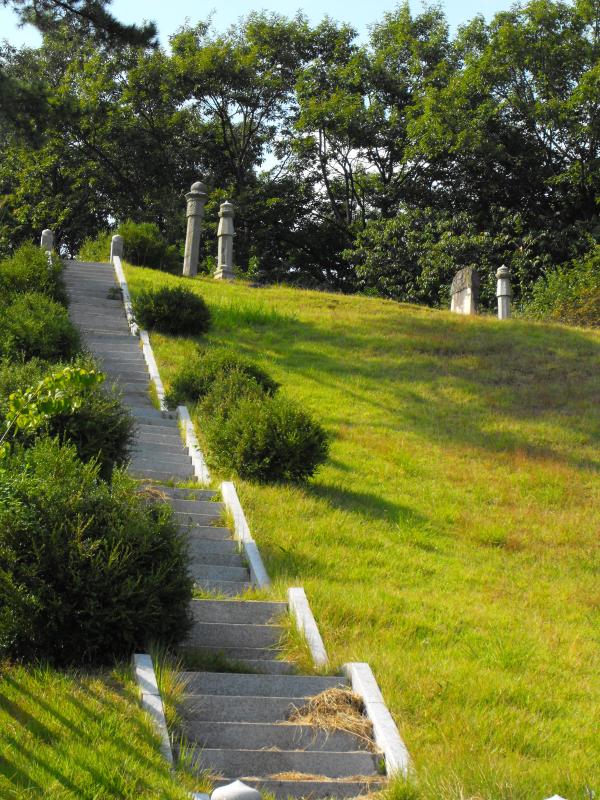 A nearby sign indicated that these are shindobi - tombs of an outstanding official awarded after one's death. While they are not as large as the various royal tombs I've seen in the past, they certainly offer many of the same features, including the
At this point, I'm about parked out. A few hours of walking around, snapping pictures, and trying to figure things / places out while taking notes on a sunny day has that effect. I then hear a few ajummas talking to each other, but I can't see them. I'm not going crazy - they're hidden behind a bush about 10 meters from the path. I then notice this dirt path: 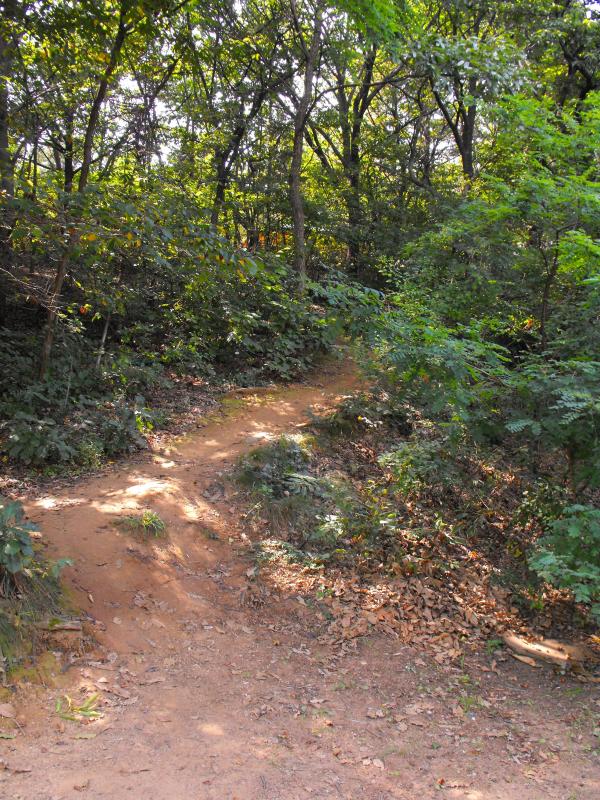 Curiosity may have killed the cat, but satisfaction brought him back. Time to go exploring.

Sure enough, a couple of hundred meters up a steep hill, I was rewarded with a close-up view of some more shindobi: 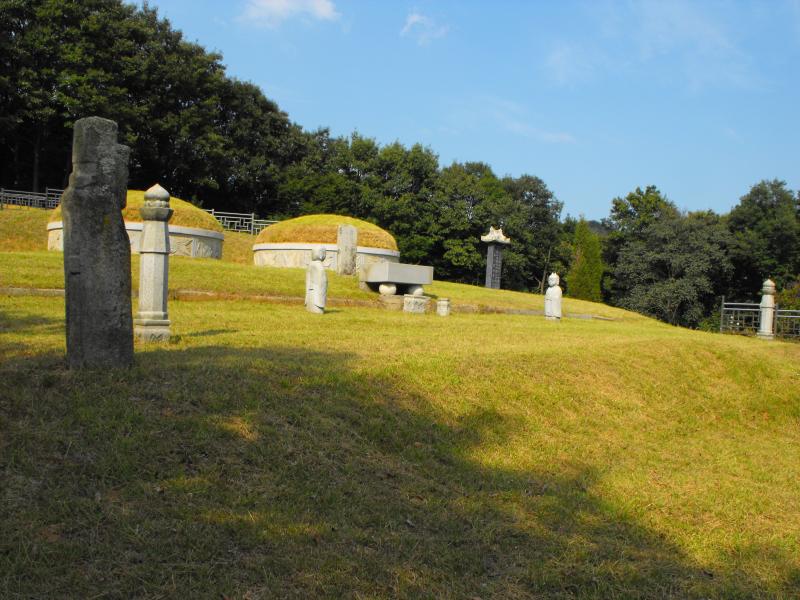 There's a fence preventing you from getting any closer, but this is about as close as I've ever gotten to the tombs before. 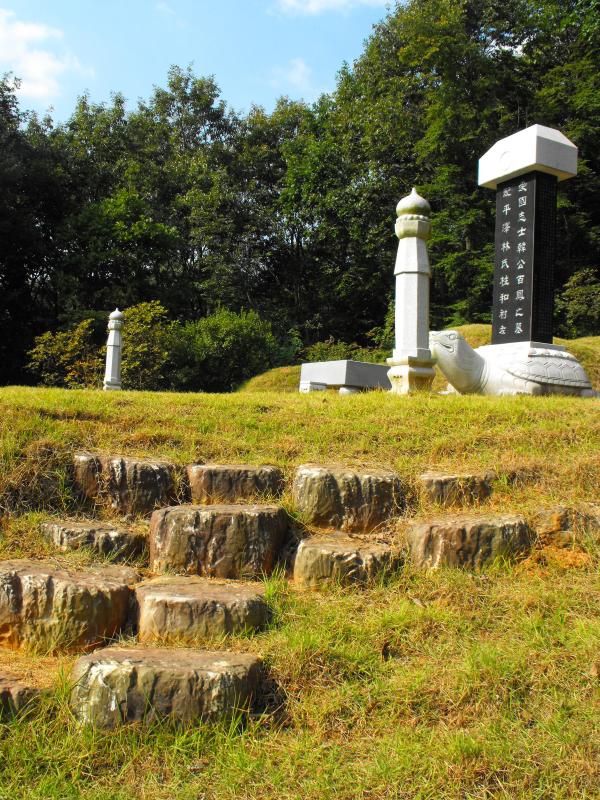 What was intriguing about these shindobi and statues is that there are no signs whatsoever. No Korean signs, no English signs, no directional signs, no signs of any kind. This place either hasn't made the tourist guides yet or has been forgotten by the people in charge of tourism. 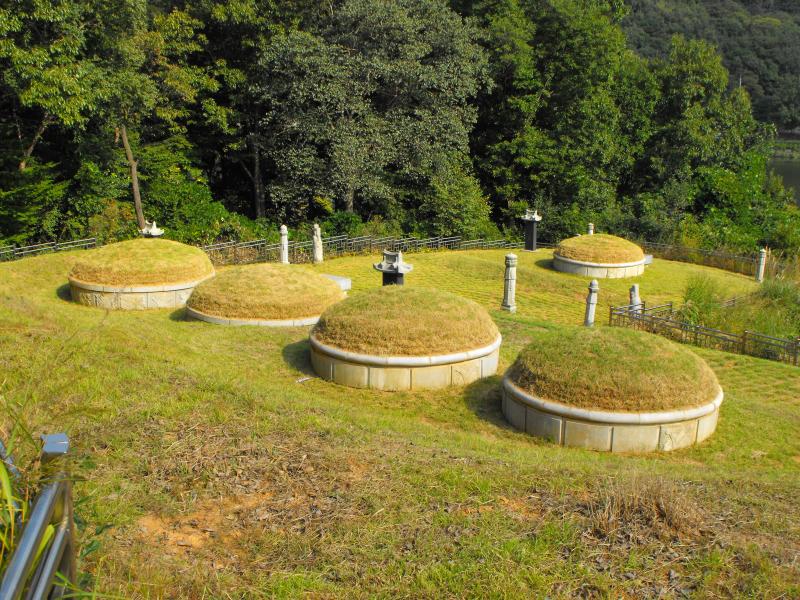 For the most part, the tombs are well-maintained; a few have been trimmed almost bare, while others are overgrown. 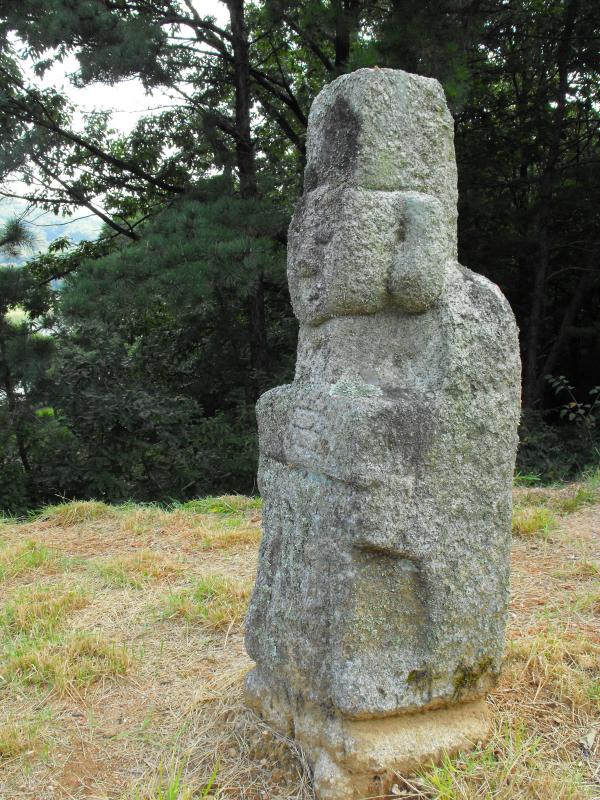 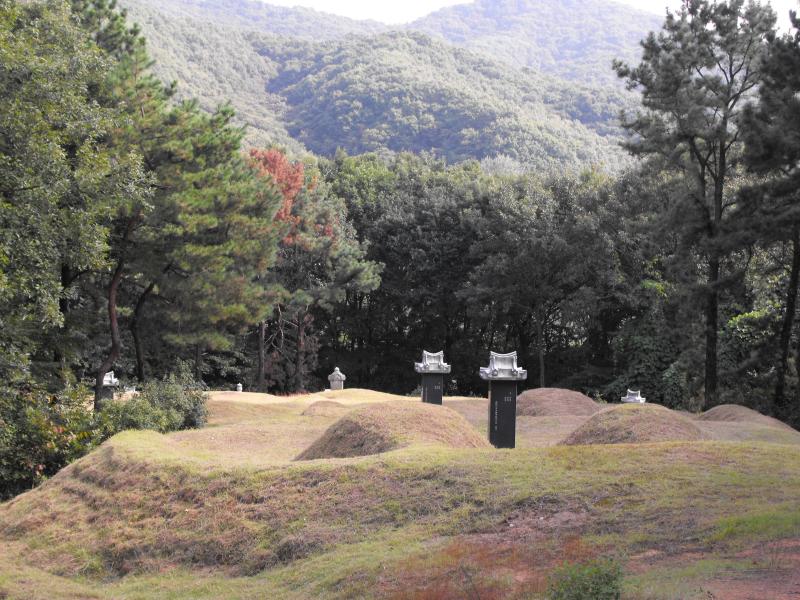 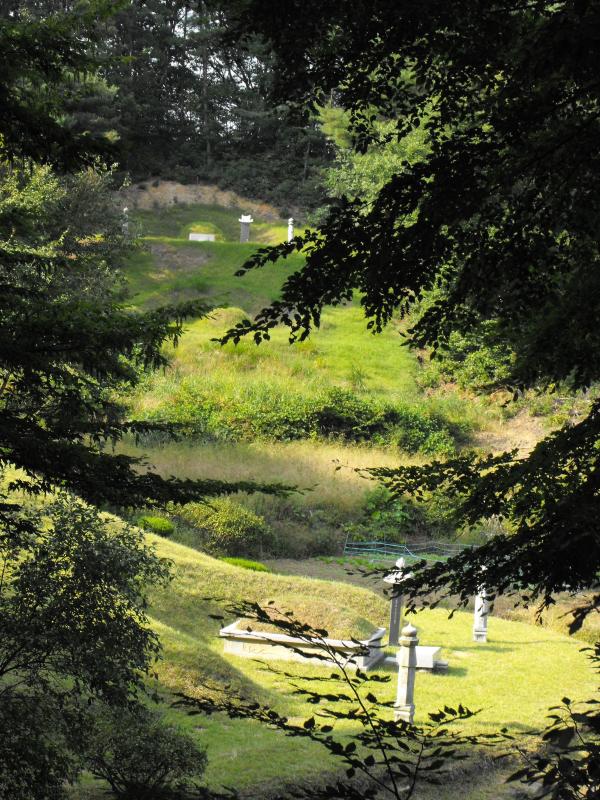 There's even more tombs to see, depending solely on how far you wanted to walk. 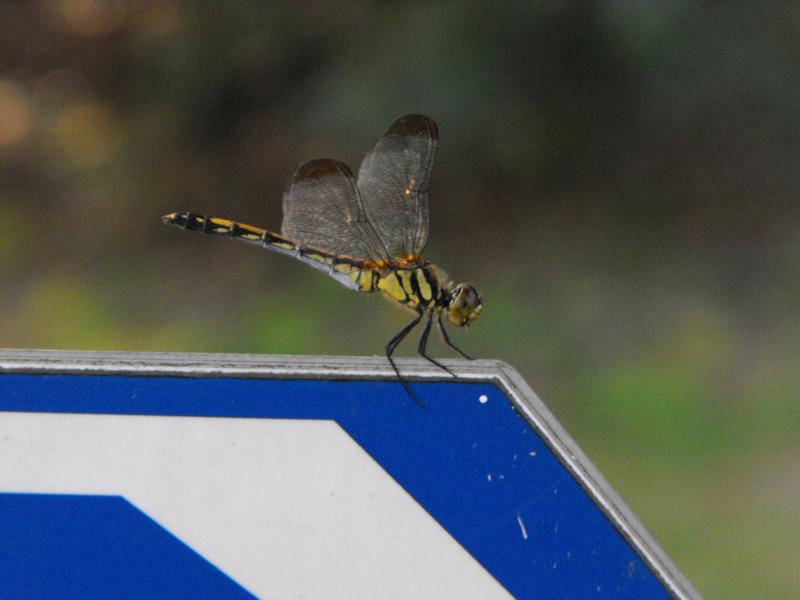 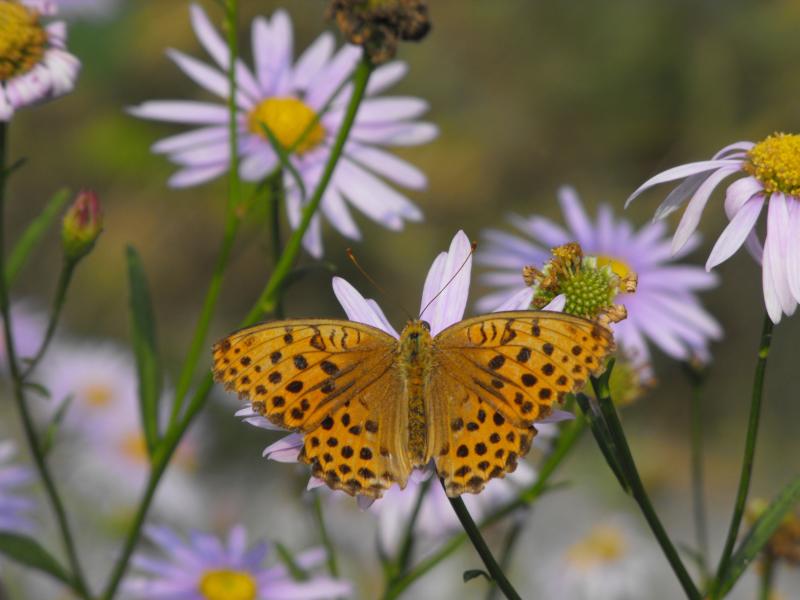 A couple of insects were kind enough to stay still for a few split seconds. 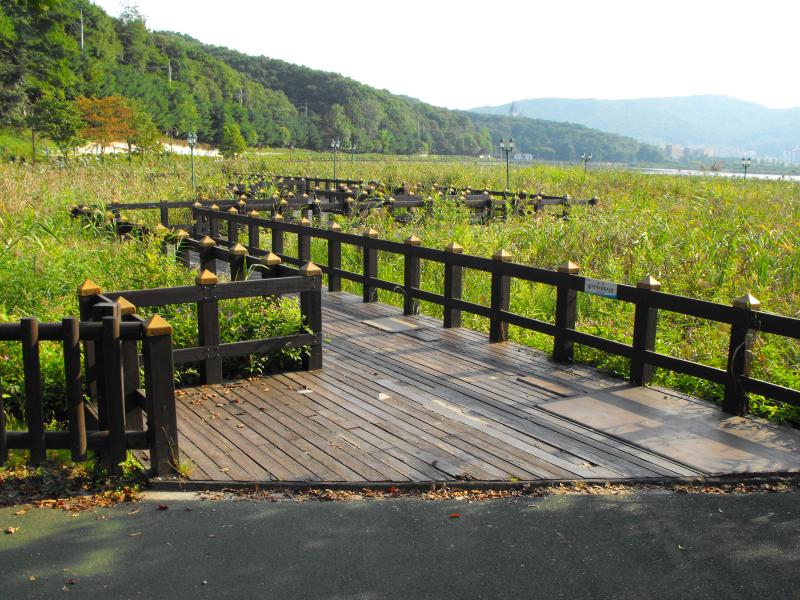 Yuldong Park is a tale of two parks. One park is almost entirely wheelchair-accessible, and offers a view of the shindobi from the trail surrounding the lake. The other park offered a somewhat more rugged (but short) path up the hill to get a closer look. Either way, there aren't any explanations of the tombs in English; the more adventurous climb doesn't have any signs at all. However, there's enough to see for an entire day after the momentary thrill of the bungee jump.

Directions to Yuldong Park: Take the Bundang line of the Seoul subway system to the Seohyeon station. Take exit 2 to the lower level of a large mall. Go up ONE elevator, then straight out the mall (it'll be gate 4 as far as the mall is concerned) and to the bus stop right in front of you. Get on bus 17 or 17-1 and go 9 stops to the park. Use the pedestrian overpass to cross the street, then keep going through the parking lot.

Alternatively, bus 1500 can take you there from exit 6 of Gangnam station., as can bus 119 near Jamsil station.