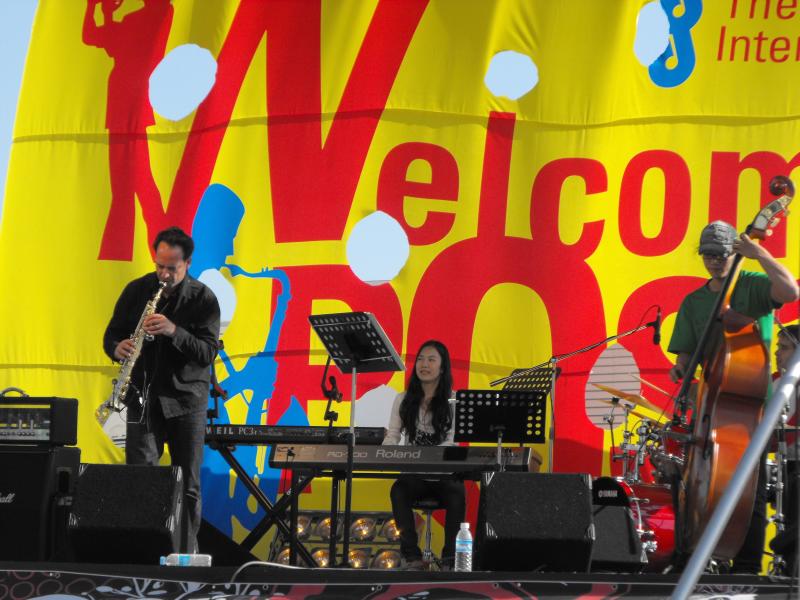 Presenting the South Mountain Jazz Orchestra at the Welcome Post.

As mentioned in this month's schedule, the 6th annual Jarasum Jazz Festival was one of the better jazz performances I've seen in person. A few flaws kept it from being an even better show, but it's an event I'll be looking for next year when October rolls around again.

Arriving in Gapyeong-gun / Jarasum took a bit longer than necessary - coming from Seoul, the website guides you to "take the 7000 bus at next [sic] to the Jamsil Subway Station" - convenient enough. It's not until you arrive at the bus stop in question (which took a call to the ever-so-helpful 1330 to determine the right exit) that the 7000 bus comes once every two hours. Strike one. One could also "take the bus going to Chuncheon via Gapyeong from Dongseoul Bus Terminal", which sounds reasonably convenient. Unfortunately, buses going to Chuncheon don't necessarily or always stop at Gapyeong - and unless you think to ask, you won't find out until you arrive in Chuncheon with that 'did we miss the stop while wide awake' look? Strike two. After taking a bus from Chuncheon to Gapyeong, we discovered enough signs and maps leading the way - but precious little in English. Strike two and a half. Tourists in Korea - when at a festival and in doubt about which way to go, follow the crowds.

Once we arrived, we dutifully followed the signs for tickets - and despite a fair amount of searching, we never found the ticket booth! At 30,000 won for a one-day pass, it's not a cheap ticket, nor something you would want to let people in for free. I'm not sure why bracelet checks for admission weren't as strictly enforced in the afternoon, or if Sunday was merely an afterthought after two busier days on Friday and Saturday. That most of the outdoor venues had no boundaries preventing anyone from listening and enjoying means next year might need a redesign. 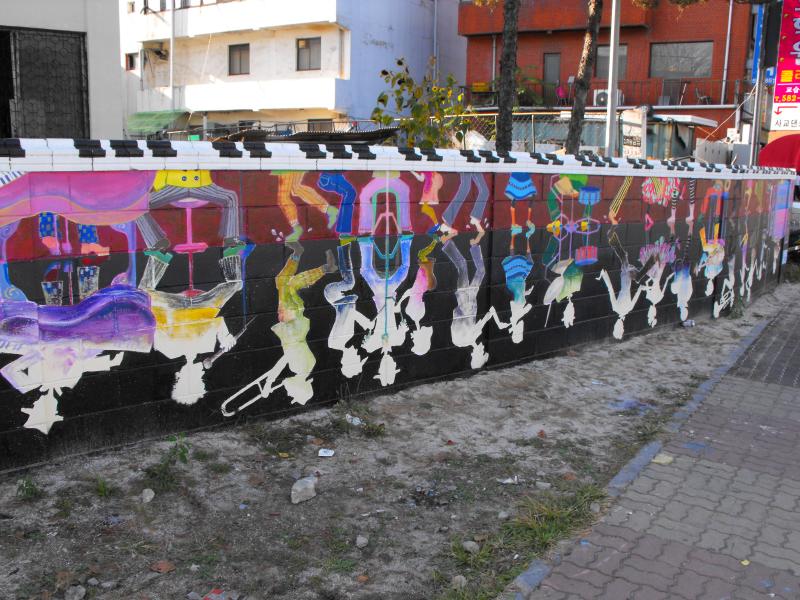 Six performance venues (mostly outside) were spread out through the small city; along the way were some enthusiastically drawn murals on the jazz theme. 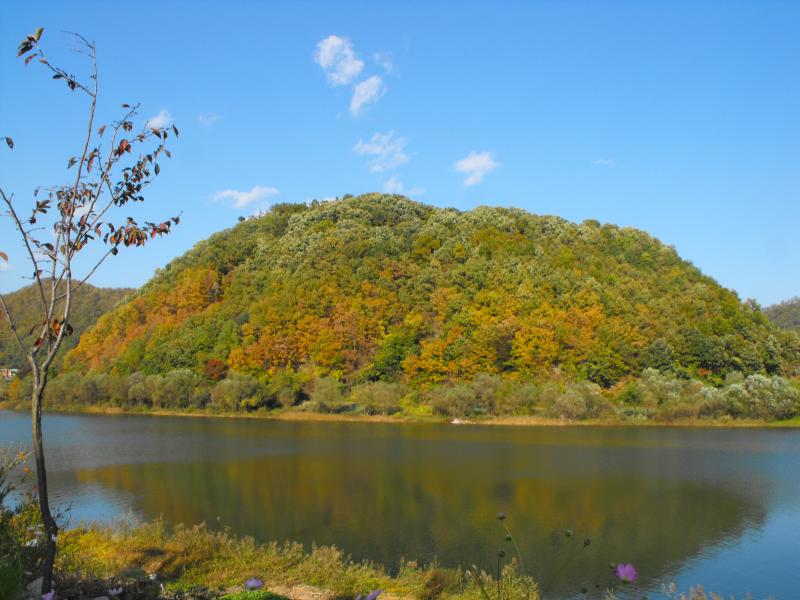 Fall is in the air - although the afternoon was quite nice, the coolness in the evening made me miss my jacket. 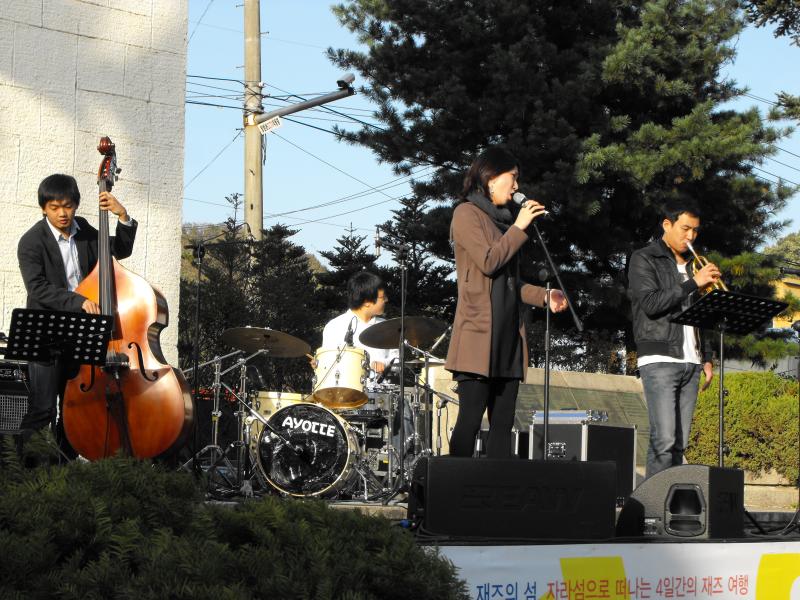 Ahh, yes, the music - the primary reason for coming to a jazz festival. Presenting 'Rising Star 2009', with a female vocalist (허소영 - Huh So-young) singing covers in excellent English. The band was chosen by Jazz People, a monthly magazine about jazz, and had ample opportunities for extended instrumentalist solos: 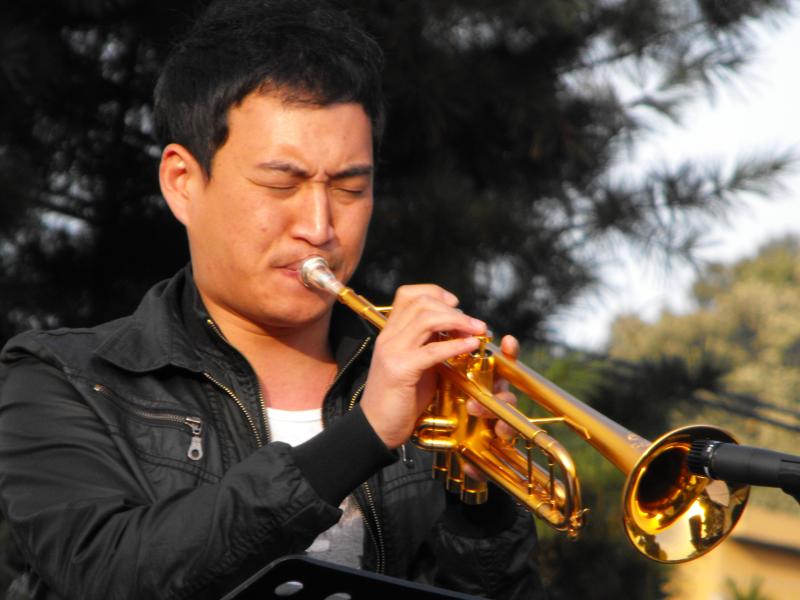 배선용 (Bae Sun-yong) on the trumpet. Louis Armstrong would have been proud.

The audience, though on the small side, barely moved during or between performances. Whether they were trying their best to enjoy the music or were simply enjoying the English lyrics, I'll never know. 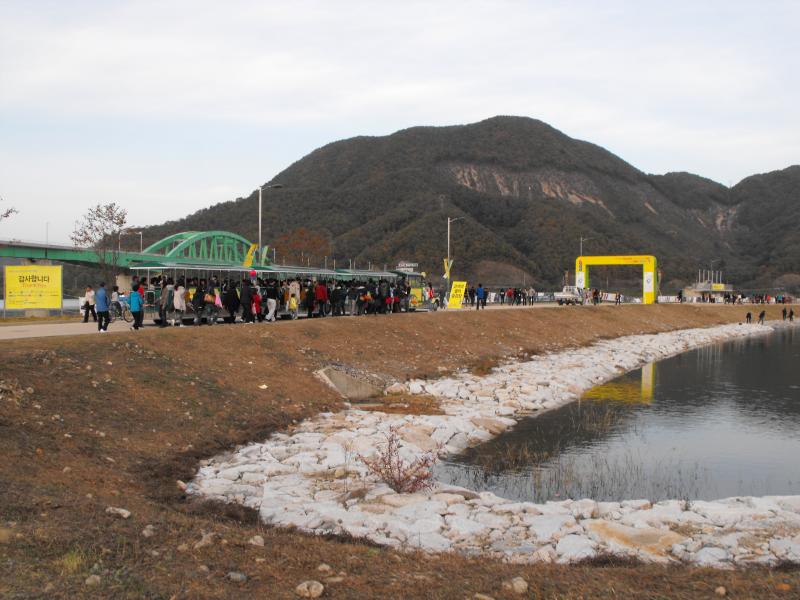 Moving on to another venue - follow the crowd around the bend to reach the island - and yes, it's considered an island during the rainy season, but connected by land during the dry season.

Once arriving, you're greeted by the 'festival' part of the jazz festival - mostly including things not related to jazz in any way: 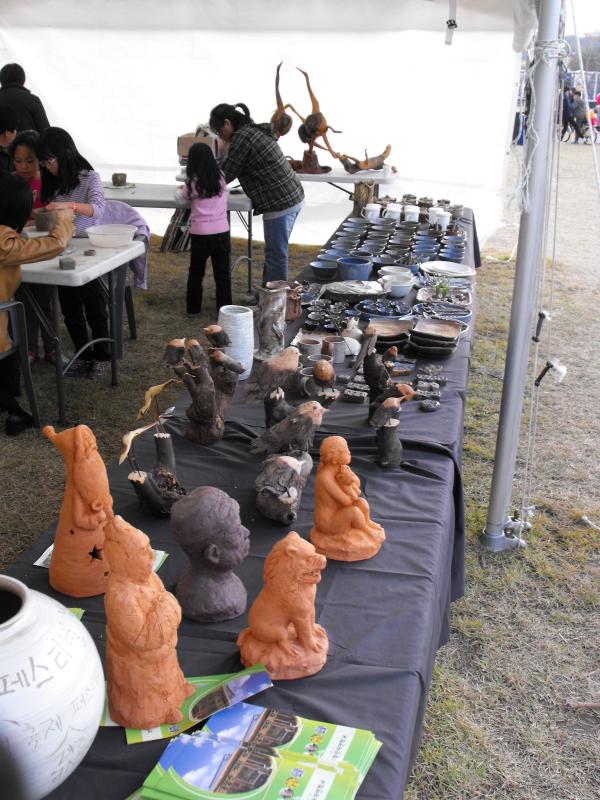 Making pottery or clay sculptures, anyone? By this point (Sunday late afternoon), a number of tents were calling it a weekend and packing up. The few that remained open had a number of items for sale - a few souvenirs, some Korean food and such. Not pictured was an entire Lotte supermarket-type store underneath a huge tent. Convenience store, Krispy Kreme, and a lounge for those special VIP customers.

It was about this point that entering venues required a bracelet to get in. No idea why they weren't checking earlier, but they're checking now. We opted to explore the area instead of paying 30,000 won for music you could hear from almost a kilometer away anyway.

Among several other murals seen around the area, this one was my favorite: 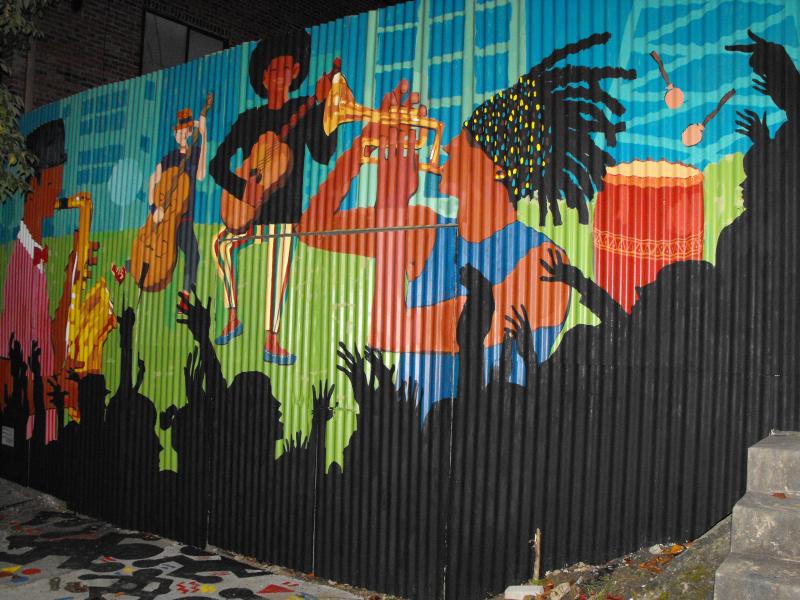 Extending onto the sidewalk and drawing on the curvy surface adds a couple degrees of difficulty.

With a few missteps fixed, I'd love to give a much higher rating to the festival. The music was top-notch, the facilities grand, and the crowd varied from old to young and Canadian to Korean. Perhaps the execution was different / better on its prime days, but Sunday seemed almost an afterthought execution-wise.