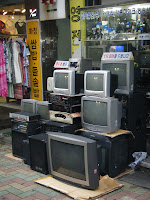 As much as I like Korea there are aspects of this place that make me want to throw myself off suicide rock. One such annoyance is the inability to communicate or handle my own affairs, which makes me not only deaf and dumb but also almost entirely dependent on the kindness of colleagues and strangers.

Take for example last Thursday night, when instead of going to my weekly Korean lesson (I assure you, the irony is not lost) I was forced by prior arrangement with my manager to wait for the cable guy to come and connect our cable TV at 6pm. After waiting for the best part of an hour, imagine my excitement when the intercom unexpectedly rang just before 7.
I danced to the door excitedly but upon opening it was greeted with nothing but an empty hall. With time breathing down my neck, and fear beginning to creep its way into my bones, I ran to the intercom and braced myself for the usual struggle. As expected, the caller didn’t speak a word of English so it was with more frustration than Korean that I tried to intimate that he should come right up and connect my cable. Without any sign of comprehension however, the conversation somehow ended and the line went dead.
“Fuck” I said loudly. I could feel 30 cable TV channels slipping through my fingers and had by now broken into a desperate sweat. I ran out the door and jumped into to the lift in the vain hope that I could catch him outside. Finding no signs of anyone that looked like a cable TV man downstairs, however I ran to the building ajoshi’s hut to see if he could shed a light.
“Ca-be-le Tee-Vee?” I wheezed.
“Anniyo” he replied, and then, producing a large sack, “lice”
I tried to explain that no-one would be sending me a large sack of rice, but it seemed a lot easier to take the sack than to leave it. As such, heavily burdened and sweating even more, I ran back to the apartment lest the cable TV man had shown up in the interval (I am convinced most of my life’s mishaps are the result of the smallest and most unlikely margins of error.)
Needless to say the Cable man never showed. “Oh well,” I thought later that night nevertheless. “Ha ha, I may not have cable but at least I’ve got a new anecdote and a year’s supply of rice, oh Ko-re-a!”
The next day people came and took my rice from me. It’s been a week and I still don’t have cable. I wanted to ask my manager to chase it up but some money I was transferring didn’t end up in the right place and we had to sort that instead. Now the internet’s buggered and I need to get that fixed first. Oh Korea.