Daeboreum (대보름 in Hangul) translates to “The Great Moon” or “The Great Full Moon” in English. As the name entails, it is a celebration dedicated to the full moon in Korea. 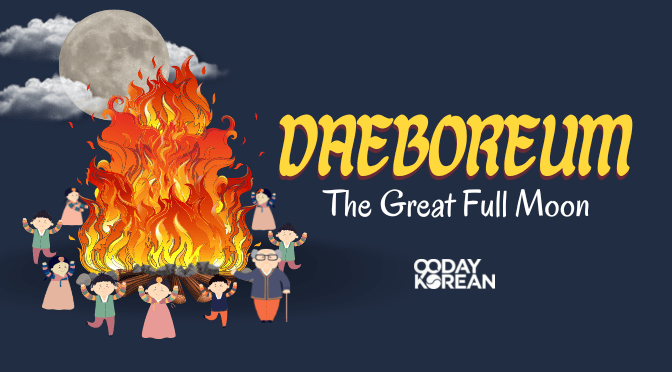 Specifically, 대보름 (daeboreum) is a Korean holiday that celebrates the very first full moon of the new year under the lunar calendar. Daeboreum is the Korean version of China’s First Full Moon Festival.

Traditionally in the Korean culture, many customs and traditions are done to celebrate Daeboreum.

A long time ago, farmers would burn the dry grass you can find on the ridges between rice fields the night before 대보름 (daeboreum). This custom came to fruition as an act to get rid of insects and mice which may otherwise damage crops in the year to come.

Today this custom no longer seems to take place. However, setting something on fire has remained a symbolic aspect of the Daeboreum holiday, commonly in the form of bonfires. These bonfires are called 달집 (daljip).

Specifically, the tradition of lighting a bonfire on fire is called 달집태우기 (daljiptaeugi). This is one of the central ways in which Daeboreum is celebrated by the crowds. These bonfires are built in a triangular shape, with the intention being to build a “house” of sorts for the moon.

After all, the literal translation of 달집 is “moon house” or “house of the moon”. There’s even a small door set on the east side of the bonfire!

The bonfire is set to burn once the moon rises. As it burns, a ritual going by the name 지신밟기 (jisinbalgi) is done around the bonfire, with people stomping their feet on the ground. Through this ritual, people believed its purpose is to scare away any possible evil spirits and bring luck.

For children, one of the most fun ways to celebrate the holiday is with the traditional game, 쥐불놀이 (jwibulnori).

In jwibulnori, charcoal fires are set inside tin cans the night before Daeboreum. They’re attached to strings, which are then flung around. This custom, too, is believed to aid in getting a great crop that year and gives kids the rare opportunity to sort of play with fire.

And, of course, because Koreans love to hike, hiking is also a popular activity on Daeboreum. It even has its own name, 달맞이 (dalmaji). In order to see the first full moon of the year rise, Koreans will hike up mountains – or other high places – for the best view.

For example, in Busan’s Haeundae neighborhood, you can find a place called Dalmaji-gil, which is a piece of road incredibly popular as a full moon viewing spot.

Lighting up lanterns has also been documented to have been a part of Daeboreum celebrations since the times of the Joseon Dynasty already.

Overall, many of the customs and traditions for this holiday revolve around the wish of getting an excellent harvest at the end of the farming season. Modern Koreans have remained excited about celebrating these customs even when though the country is no longer as agricultural as it once was.

There’s also a festival dedicated to Daeboreum hosted on Jeju Island each year, as well as a Fire Festival held in Busan.

Jeongwol Daeboreum (정월 대보름) refers to the festival that takes place on Daeboreum and celebrates it. During it, a lot of traditional customs are executed as people wish for a flourishing year. Due to the fire aspect, the government actually forbade the celebrations for some time during the 1970s.

However, the festival celebrations during Jeongwol Daeboreum remained so popular among Koreans that in the late 1990s, it was reinstated. Today it is celebrated in numerous locations around Korea, with Busan being one notable location.

In general, if you are in Busan or want to head that way for Jeongwol Daeboreum celebrations, the best activities can be found at Haeundae Beach, Gwanganli Beach, Songdo Beach, and Baekunpo Sports Park.

All of them will set a daljip ablaze at the appropriate time, as well as offer other fun things to do, like flying kites or tug of war. There will also be traditional performances to marvel at. And, at Baekunpo Sports Park, you can even see the jisinbalgi ritual in action!

Which are the foods eaten during Daeboreum?

Just like many other holidays in Korea, big or small, there are specific foods people are accustomed to eating on the day. In the case of 대보름 (daeboreum), the following foods are especially popular to eat.

First thing on the morning of Daeboreum, people eat this five-grain rice dish, which consists of rice, millet, and Indian millet, as well as black beans and red beans. This food is commonly served together with dried herbs. Some Koreans may also eat it together with eggplants and squash.

Also eaten in the morning, this is more of a snack rather than a full meal. Koreans crack nuts of different types to eat on 대보름 morning such as chestnuts, peanuts, ginkgo nuts, pine nuts, and walnuts. This is perhaps the most popular Korean food to consume on Daeboreum.

While munching on those assorted nuts, Koreans will drink 귀밝이술 (gwibalgisul), which literally translates as “ear clearing wine” or “ear sharpening wine.” It was thought in the past that this wine would improve one’s hearing and also keep ear aches away. Also, it is believed that all year round, you’ll only hear good news if you drink this.

How true that turned out to be, we’re not sure, but the custom still remains in existence today.

These delicious rice cakes are made from steaming glutinous rice. The rice is steamed and then beaten until it’s reached a sticky consistency. It’s then cut into small square-shaped pieces, which are covered in bean flour before serving.

Finally, another special dish typically eaten on the holiday is yaksik, made with glutinous rice, as well as chestnuts, honey, pine nuts, sauce, soy sauce, and sesame oil. It can be served in a bowl, in a form similar to cake, or in smaller bite-size pieces.

Does your country have a similar holiday to the Korean Daeboreum? Would you like to experience this in person one day? Let us know in the comments below! Learn more about Korean holidays and other aspects of Korean culture on our blog next. Korea has so many interesting holidays, such as National Foundation Day!