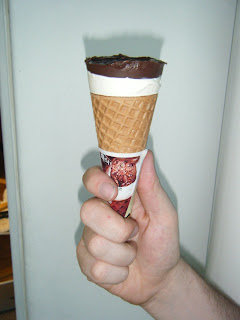 Up until quite recently I thought the only crunch I was going to experience in Korea was the one that sits atop the gloriously chocolately “Crunch King,” (pictured) a Cornetto type ice-cream that tastes even better than it sounds.

However, things changed dramatically last month when I discovered I was thirty pounds down on my monthly cash transfer to my home account.

Since then the Won has been on a (mostly) downward spiral. My first remittance of 1 million won bought me a cool £500 sterling back in August but that same amount now is worth little more than £400. In fact, the currency is so volatile that if I check the exchange rate online before I leave for the bank I’m likely to get a different rate entirely once I get there.

The situation has gotten to the point where I’ve stopped sending back money entirely. Instead, I’ve decided either to keep the money in my Korean account in the hope that things won’t get much worse, or blow all my pay check on a Crunch Kings and electronics. A tough choice and if I know myself (which I think I do) the latter will prevail.

Still, at least Korea has President Lee Myung Bak to steer it through these troubled times, a man whose sole contribution to the global recession debate has been something along the lines of “we must not lose sight of free market economics.”

In this uncertain climate it looks like Sarah and I may have to put our planned trip of “five or sixth months or so” at the end of our contract on ice, having most definitely counted all our chickens before they hatched.