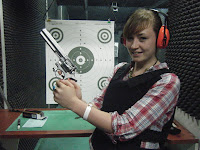 This post is really just an excuse to publish the adjoining picture of “Crack Shot” Hogg but as I’m here I may as well give a little back story and imply a few points about Korean health and safety while I’m at it.

Last Saturday, while trying to think of a way to pass a rainy day and blow away the cobwebs of a hangover, The Duchess, our visiting friends Laura and Ross and I settled on the idea of shooting some guns. We had it on good authority that this was both a fun and accessible pursuit in Busan, so it was with itchy fingers and a sense of intrepidation that we made our way to one of city’s indoor firing ranges.

The firing range was located on the second floor of a medium sized tower block just off Haeundae Beach, and after shaking off our brollies we immediately got down to business. A menu of sorts was quickly produced listing both prices and guns (50,000 for a Magnum with 10 bullets and 40, 000 for everything else) and after some careful consideration I decided to go Gangster-style with a Glock, while Ross chose a similar Automatic and the girls opted for a pair of beautiful silver Smith and Wesson Revolvers.

Within minutes we were led into the firing range and the guns were brought out. After one trial run and with the words “Are they really going to let me do this?” rolling about in my head, I then found myself raising the loaded gun and squeezing the trigger. The weapon jolted to one side like a kicking mule, sending a shockwave through my right arm and a spent shell pinging into the ceiling. I looked at the unblemished paper target and then at my guide, who winced a little, before raising the gun and firing again.

I missed the next shot, hit the one after that, missed, then hit the rest. All in all I did ok but I think I can safely assume I’m no marksman. Meanwhile however, unbeknownst to me, a few booths over a deadly talent was being born. The Duch, displaying the steadiness of hand and cold-hearted nerve I always suspected lurked beneath that warm and sunny exterior, was blasting seven shades of shit out of her own paper nemesis. When the smoke cleared she’d bagged an 83% accuracy rate, towering over my paltry 63% and a good 10% higher than the next best shot.

I can see why people like this kind of thing, there is definitely a sense of power involved with having a mini-explosive go off in your hand and the aesthetics are great. However, contrary to the predictions of some, I don’t think I’ll be turning into a gun nut. An Automatic once in a while and a 44 Magnum on my birthday should suffice. The Duchess I fear, may be a different story…