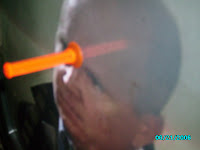 My devotion to Eastenders has recently been on an upward trend as events in the soap begin to take a promising turn for the wretched.

Not since the Krays Chinese Smiled their way round the ol’ East End in the 50’s and 60’s has London seen the likes of what is about to kick off in the otherwise quiet leafy suburb of Watford. Mark my words, it’s going to be a red Christmas in the square as the cobbles get an overdue taste of Mitchell blood.

All the evidence points to a full scale war; Jim has gone into hiding, most likely to direct operations from a heavily fortified compound safe from Mitchell bullets. Bradders, masking an icy intellect behind his ruddy faced hang-dog optimism has taken control of the Market, weeks after suspiciously quitting a high powered city job to “assist” the Market Inspector (whereabouts currently unknown.) Jack, the Brannans’ “man on the inside” has duped his way into a controlling share in a Mitchell enterprise, while the loose coalition between the Brannans and the Beales looks set to become official as Lauren and Peter prepare to enjoin the families in blood.

In contrast the Mitchell Family has never looked weaker. Having failed to produce an heir of any substance in Ben, Phil has taken it upon himself to provide the sole muscle of the operation. Attempts to recruit a Soldier in Jason have so far failed, and while Peggy, Ronnie and Roxy managed to face down the bailiffs as an impressive trio of no-nonsense broads, recent in-fighting is causing divisions that will take more than a few vodka shots to heal.

The gloves are off, and despite loose cannon Steven Beale threatening the entire plan with a premature blazing of Mitchell’s Motors (note Stacey earning her stripes,) things are falling into place that could see the historic seat of the Mitchells change hands before the New Year rings in…

While one world disintegrated, another was saved as Heroes reached its foregone, if no less dramatic finale last Thursday, opting to end things in the time honoured tradition of a double-bill.

Although we never really expected the creators to inflict September the 11th times a thousand on New York, the finale to this highly watchable if a little trashy American export lived up to the hype, and avoided the misty eyed American patriotism that I always suspected lurked at its core.

I wont give too much away, as I know for many this show is a hang-over box set waiting to happen, but its suffice to say its worth sticking around, if only for the Evil Dead –like leader into season two which is no doubt mere months away.