I keep telling myself I won’t go more than a couple of days without updating this blog, but things just keep not working out that way. This time, I’ve gotten sidetracked by photography. I started out a few months back as worse than the average casual photographer. I used to be infamous among my friends for taking terrible, blurry photos, and photography is definitely what eats up most of my time in keeping this blog. Recently, a friend mentioned that she would be willing to sell me her Nikon for a song since she’s looking to upgrade. My current DSLR is worse than useless, but I’ve been putting off replacing it until I can justify the cost. A year ago, when I started to think seriously about figuring out how to take photos, shelling out for a new DSLR would’ve been akin to finger-painting with oil paints.

My photos won’t be winning any awards anytime soon, but I am starting to feel handicapped by the tools I have, which is a good sign — it’s what I wanted to feel before I went for the new camera. The friend’s announcement has had me spending a lot of time fiddling with photography this past week, which ate into actual blogging time.

Now that I’ve gone on about it, I have to post bar food photos, which are the worst. I need to work on how to handle low-light situations, and maybe a new camera could help with that.

On to the place. 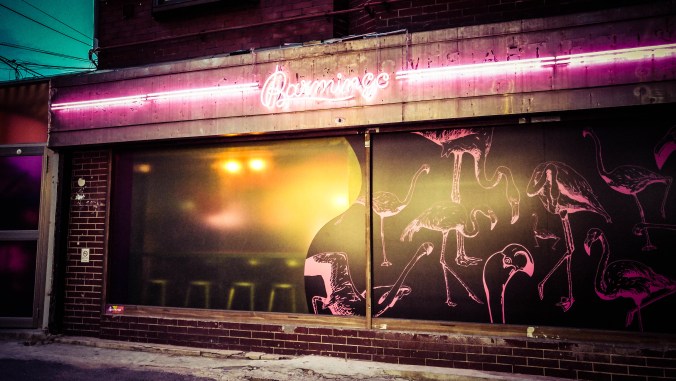 Barmingo opened at the end of February, and since then, it’s been getting some darling treatment from the press with mentions as a new Seoul hot spot in both Vogue and Olive.  Barmingo is the little sister of Baraboom, located just up the road, a place where it is infamously hard to get a seat without a reservation. It looks like things are pretty much the same with Barmingo — luckily, we dropped by early enough on a weeknight to grab a seat at the bar. 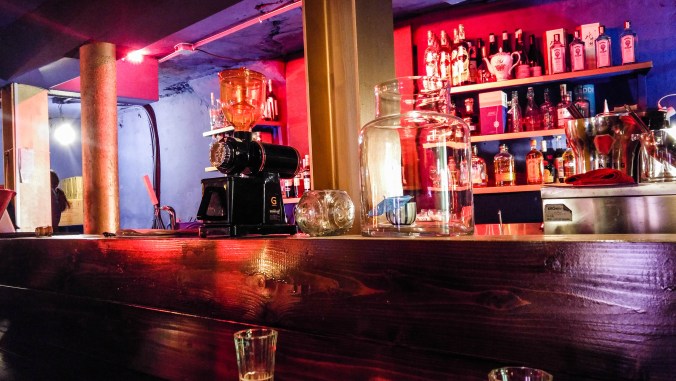 The exterior of the bar is purposely ambiguous, the idea being that only those “in the know” will know it’s there, and the interior has a bit of the same kind of speakeasy feeling, but with an opium-den-meets-South-Florida kind of vibe. There is a ridiculous, massive paper dragon circling the entire front part of the bar, which is lit by lanterns and bare red light bulbs. Plenty of table seating, including a large wooden table running the length of the bar in front, and lots of screamingly vibrant colors that probably only work together given the dim lighting. 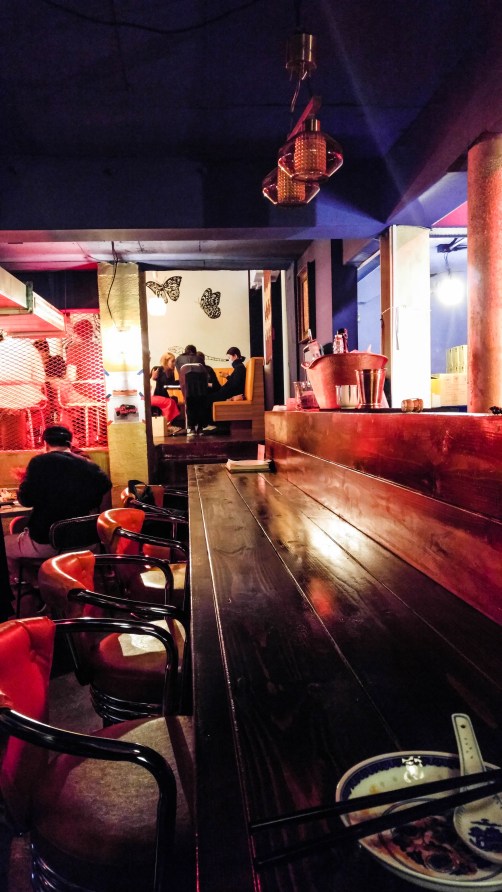 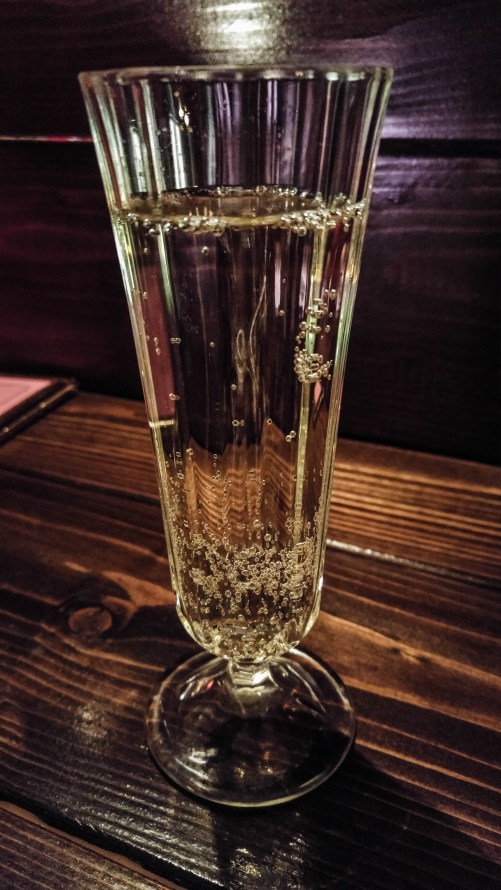 The owner was very eager to help and make suggestions. After we settled on the Cointreau orange pork, he suggested we pair it with the house white wine, and when he realized they were out of the house white, he opened a bottle of sparkling white wine and served it to us for the house wine price. He also suggested we try the egg-fried rice after watching us hem and haw over our second item, reasoning that it would balance well with the pork. 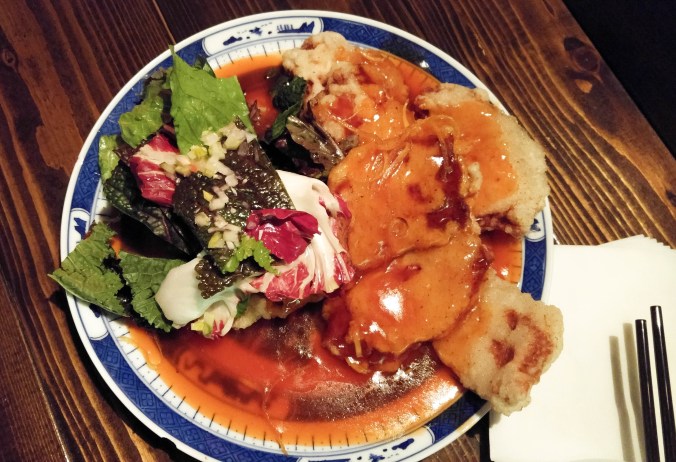 It was cute to watch the owner explain the pork dish. I get the feeling he has to defend it a lot, because it’s a reworking of a dish that is very familiar to the Korean palate (tangsuyuk). He explained that it’s battered in glutinous rice flour rather than wheat flour to add texture and chewiness and that the sauce is from a “French orange flavored liquor” — the Cointreau. He said, essentially, that it may not be what we were used to (primarily speaking to B) and that it was “tangsuyuk (sweet-and-sour pork) for adults, not children,” which would have come off as obnoxious had he not been so kind. What he meant, at any rate, was that it was heavy on the sour, light on the sweet.

Tangsuyuk is one of my favorite fast-food type meals here — I basically only ever eat jajangmyeon (black noodles) to get to the fried pork. That having been said, tangsuyuk is almost always way overcooked, probably because it may be two or three days old (and continuously re-fried) before it gets to you. It was really nice to have some cooked to order with a decent cut of meat. The sauce was on the verge of overpowering, but good enough that I was still sopping it up with the pork as I went. 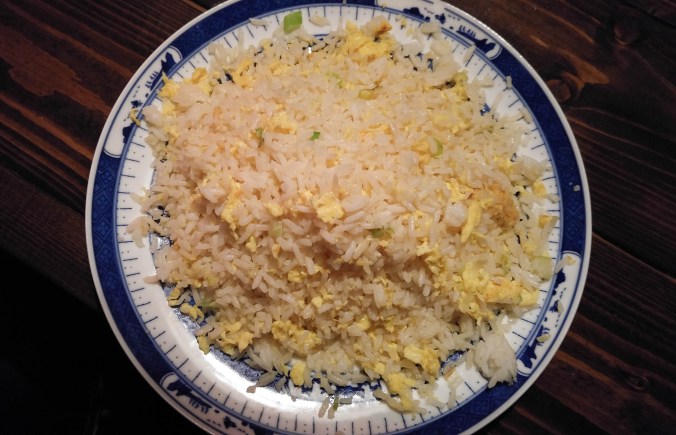 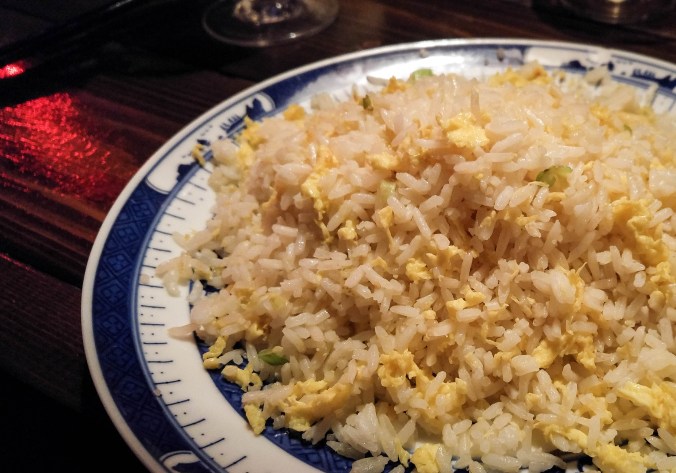 The owner was right that the egg-fried rice would’ve made for a nice counterpart, so it’s too bad the kitchen got backed up and we saw neither hide nor hair of it until the pork had been half an hour demolished, the empty plate long sent back to the kitchen.

It was still good, though. Made with long-grain rice, it was just salted enough for me, which means that it will be too salty for some, but it was definitely an elevation of the stuff my roommates and I used to snarf on street corners at 4 am after a night at the local in Brooklyn (a culinary practice I have dearly missed). Not a shred of soggy, not a drop too dry. 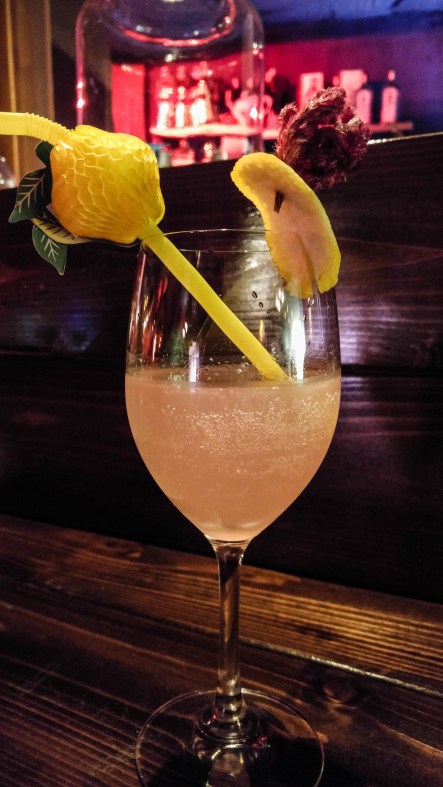 The Flamingo is (obviously) the bar’s signature drink, and it was the first thing the owner suggested we try. It’s made with Botanist gin, cockscomb and lavender syrup, fresh lemon juice and sparkling white wine. I got none of that. It was good — a nicely balanced, tangy drink with bubbles. Would I pay another 18,000 won to have it again? No. I’d just as soon dump rum and Dr Pepper into a tumbler at home for the equivalent of a fiver.

I’m not a cocktail’s target audience, though, so take my opinion with a rock of salt. Also, I don’t have the foggiest idea what cockscomb is supposed to taste like.

Then came the Ppeppino, which the waitress said means “cucumber” in Italian. It doesn’t. That’s “pepino”. But close enough and forgiven, because it was the kind of drink that makes a chronic cocktail avoider reevaluate her life a little. 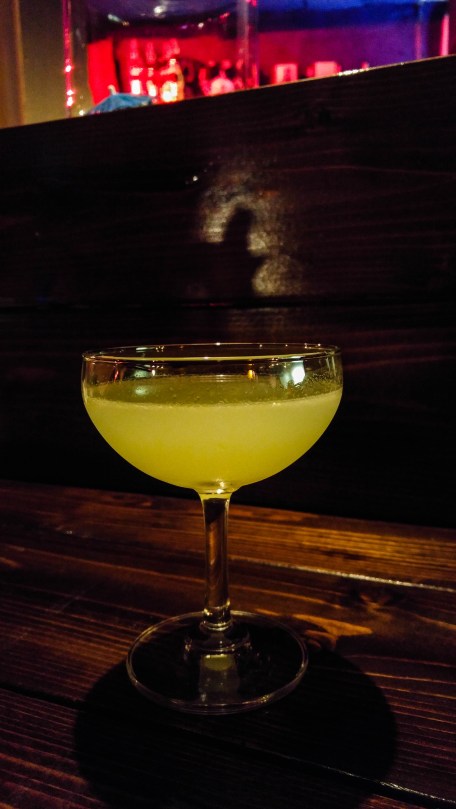 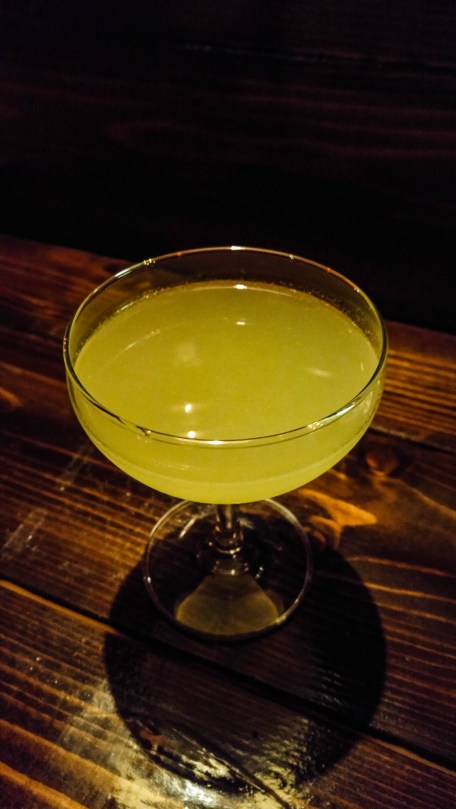 But then I had a feeling it would. Botanist gin, absinthe, cucumber, fresh lime juice and simple syrup. I love absinthe, but I think we can all admit it is an abrasive drink. The gin helped to clean it up a little, while the cucumber toned it down and the lime balanced its bite. The simple syrup had adapted and blended in, as it should.

Barmingo offers a full menu of dishes including chili chicken gizzards, dried tofu and seafood stew, choy sum and deep fried pork skin. They even have a few desserts, including one made with flower buns and dulce de leche, which I personally would like to go back and try. The food ranges from small tapas plates from 5,000-12,000 won on up to the most expensive dish, oven-roasted duck with bao buns, for 35,000 won, with the average falling somewhere around 20,000. Other cocktails include the Opium Martini (Kaoliang, Kwai Feh, dry vermouth and lime juice), The Monkey Swing (Monkey Shoulder whisky, ginger syrup and Swinkels beer) and the Barmingo X Cointreau Fizz (Cointreau, Campari, lime and soda water), and prices range from 14,000-18,000 won (most being 18,000). They offer a decent but small selection of beers, wines and liquors, with a few surprising options. The menu was interesting enough that I will definitely go back just to try a few more of their dishes and cocktails, despite my preference for home-drinking. If you do drop in, definitely give the Ppeppino a try. And don’t forget to make a reservation. 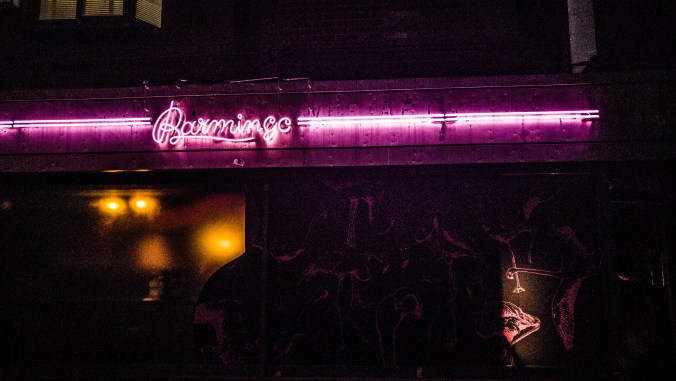