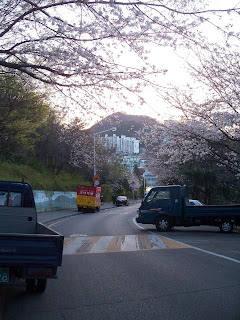 As my first year in Korea will come to a close soon it has been of utmost importance to figger out what I am going to do next. I have had to face the grim reality that I am very, very happy here. Why this is I can't pinpoint exactly but there is little I can do now to fix it. I seem to be stuck with a beautiful Korean girlfriend who is nearly half my age and thinks I can walk on water. I have also nearly procured what appears to be, on paper at least, a deeply rewarding and highly lucrative new job. All my friends here, expat and Korean alike, seem to think I am funny and witty and at times tolerable. And Spring in Busan is just simply incredible.

The main source of angst now is the break. I have nearly two months with nothing to do. I am not sad about this. If you know me you will recall that leisure is my area of expertise. But with this amount of free time comes responsibility. Should I go home and see the people I miss who apparently miss me as well or should I go see something in Asia or should I get a temporary job and work like a good boy?

In what amounts to being as close as I ever come to a serious commitment about anything, I purchased the Loney Planet for Southeast Asia today. Aside from being a major financial investment (damned Korean bookstore), simply holding the thing in my hands makes my leg start twitching. It is huge (we are already calling it "The Bible") and chock full of travelley goodness. I remember the day I bought the Loney Planet for Korea. Even though it was still a tentative decision, when I opened that up it was over: I was already on the boat.

This is worse. From what I have been told and now read, we can go almost anywhere we want in Southeast Asia outside of Singapore and Hong Kong for $30 a day. That means that I could conceivable spend the whole two months walking about down there. I am also looking into the possibility of working for a little while here in Korea during that time or possible getting some temp work in Thailand. That would make me feel better about it.

I would like to hit Cambodia, Laos, Vietnam, Malasia, Sumatra (Indonesia), and Bali as well but all of those places have had political/terrorist/Muslim issues lately. They just caned an Italian aid worker in Indonesia for having pre-Marital sex with his Muslim girlfriend, but usually (so the book says) the Islamic laws are only enforced on Muslims. And I am and have always been exceptional when it comes to the authorities (there is a standing bet among the wait staff at the Sangamo Club regarding the date/cause/number of lashes of my inevitable caning). Many of the areas I will be visiting were affected by the Boxing Day tsunami, which killed approximately 220,000 people. In many of those places the after-affects were positive. Northern Sumatra rebels negotiated a peaceful coexistence governance due to the necessary presence of foreign aid workers there. It is now safe to travel to some of the most pristine beaches in the world along the western coast.

Burma is still largely off limits and there are issues with Muslim separatists in Southern Thailand, but they aren't into killing tourists too much. I also have to figger out an immunization schedule, as it looks like I will need about 30 shots. This doesn't sound good, but then neither does Dengue Fever (they call it "break-bone fever because of the associated joint pain). Asia has budget airlines like Europe now and I can get flights around the region for next to nothing (Bangkok to Manila $60, to Singapore $30, to Hanoi $50 [in all cases cheaper than first-class bus or train]). It is my plan to find an island bungalow ($10) and chill for a week and then getting out a bit. The Loney Planet lists cooking classes at most of the larger Thai destinations and a three day course with lodging is well within the budget and I wouldn't mind adding Thai to my already impressive culinary qualifications (it's true, I'm sorry, but when you look like me you better have some skills or you are going to be L-O-N-E-Y).

So that is the deal. All of those people back home who feel like they can't wait another year to see me could maybe consider meeting me in Hawaii at Christmas time. Peace.