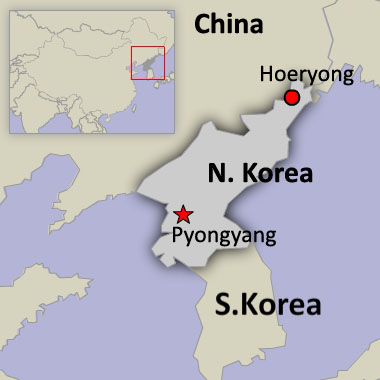 The largest factory in the far northeastern city of Hoeryong is Taesong tobacco plant. It is one of the few factories which has continued its operations throughout the disruption and chaos of the last 15 years. It is also quite a popular place to get a job, the locals work hard to secure a job at the factory.

Indeed, Taesong factory gives its employees a number of impressive perks, since it produces tobacco for the military’s consumption, it is officially considered to be a military enterprise. Therefore all its employees are issued food rations – a rare privilege in North Korea nowadays. Salaries are also quite large (but still below the survival level), but the major attraction of the factory is something else: it’s a place where it is easy to steal things which are in high demand on the market.

Theft has always been a problem in state socialist economies. They are not known for their shortages for nothing, thus there is always the temptation for workers to steal produce or equipment. At the same time, management is not too eager to try to prevent theft. After all, property which is stolen belongs to the state, that is, to nobody. So, there are many cases when management is willing to turn a blind eye to theft.

Similar problems can be seen in virtually all communist states, but in North Korea of the past fifteen years, these problems have acquired a remarkable scale.

Let’s return to the Taesong factory. There are at least three things which can be stolen from there. First, workers can take the finished product – that is, cigarettes themselves. Second, the tobacco leaves can also be easily sold. Third, cigarette paper is of great value because many families in the city of Hoeryong are engaged in small-scale private production of cigarettes – and making cigarettes is impossible without cigarette paper. Needless to say, workers are quite happy to steal all three items.

There is an established system of theft, with a well-defined division of labor. There are workers who can move blocks of cigarettes outside the factory, but in order to do so one has to have good connections with the guards or alternatively be willing to pay a significant bribe. Therefore, the average worker who removes a block or two once every couple of days, would have trouble in getting his loot outside the factory perimeter.

As one might expect, entrepreneurial spirit has come to the rescue. There are a number of professional go-betweens, whose job it is to move large quantities of stolen cigarettes, paper and tobacco leaves across the factory fence. These people have cozy relations with some guards and can therefore, remove the loot with impunity.

So the workers don’t usually sell the stolen goods themselves, instead they are bought from them by the go-between, who then proceeds to smuggle the goods out and sell them at market. In most cases, go-betweens don’t take unnecessary risks: instead of selling goods at the open market, they go straight to wholesalers who send the product across the whole of North Korea.

The Taesong factory managers and accountants have estimated that some 20-25% of the total factory output ends up being stolen. But not much can be done about it.

Of course, tobacco products are in high demand in a country where virtually all adult males smoke. Nonetheless, entrepreneurial workers find stealable items, even in a highly inhospitable environment.

For example, another major factory in the city of Hoeryong is the Mining equipment plant, now barely functioning due to the general economic crisis. As one would expect, mining equipment would be of little use in private houses, but workers have access to sheet iron and other metals which are in high demand.

The easiest way is to remove sheet iron from the factory and then sell it at market. More entrepreneurial workers have found a more profitable solution – they use sheet iron to make crude nails, such nails are inferior in quality to standard nails, but can be sold very cheaply, since the raw material is essentially free.

In some cases, workers use factory equipment to produce items for sale. For example, a foundry in the Hoeryong city area is known for the production of iron cooking utensils. Such utensils are made by workers during their work hours, using state-owned raw materials and equipment. A former worker observed that this small scale private production may be the major reason that keeps most workers at the foundry.

The problem of theft from the state has become far worse in the last 15-20 years – obviously a reflection of North Korea’s sorry economic situation. However, theft from the state itself has been around since the inception of the North Korean state socialist economy. Like it or not, the problem is the result of structure of the economy. So it is likely to persist as long as the state operated economy continues to exist.