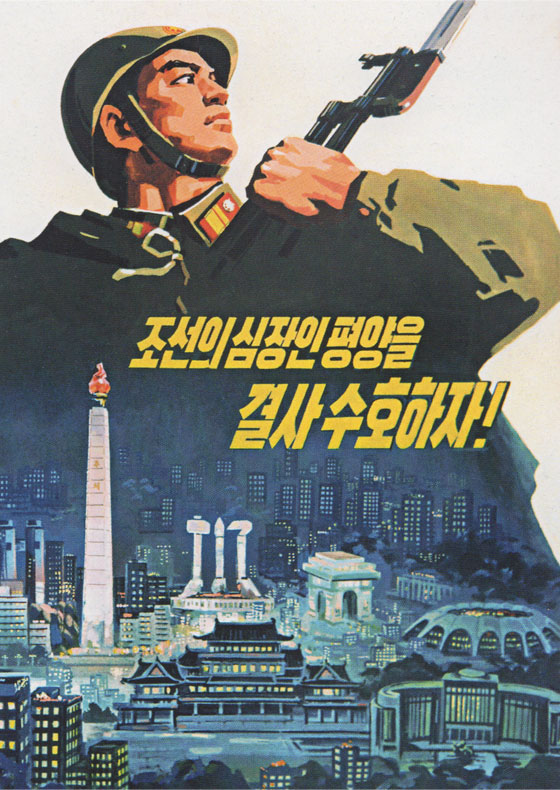 Stalinist regimes love their capitals. A capital is usually a very special place. It is extolled by court poets in their lengthy odes. Its cityscapes (well, what is supposed to be their cityscape in the ideal world, imagined in the works of propaganda arts) are depicted by the nation’s best painters. And of course, a lot of money is spent in building this perfect place. Capitals tend to be most affluent and sophisticated cities of most countries, but in a Stalinist state, this tendency is taken to extremes.

Pyongyang is no exception. Strangely enough, for the first few decades of North Korea’s history, Pyongyang was not officially considered the capital of the country. The regime in the North positioned itself as the sole legitimate government of the entire Korean peninsula, so until 1972, the North Korean Constitution designated Seoul as the capital of the Democratic People’s Republic of Korea (North Korea’s official name). According to the official discourse of the time, Seoul was considered to be under the occupation of the American imperialists and their South Korean stooges. Pyongyang, in this scheme of things, was merely the provisional headquarters of the peninsula’s sole government, to be used only until the eventual liberation of Seoul.

Only in 1972 was Pyongyang officially promoted to the status of national capital. However by that time, it had long been the focal point of an intensive propaganda campaign. From the late 1950s, the North Korean media described Pyongyang as the “Capital of the Revolution” and extolled its beauty and alleged “historical significance.”

Of course, Pyongyang does have some interesting historical heritage. In the middle of the first millennia AD it was the capital of the kingdom of Koguryo kingdom, one of the three kingdoms which fought for supremacy on the Korean peninsula in the 4th-7th centuries AD. In subsequent centuries, it was an important administrative and economic centre.

In the colonial period, Pyongyang was an embodiment of Westernization, arguably the most pro-Western (yes!) and most socially advanced city in Korea. Among other things, it was one of the three cities in Korea which had streetcar service – a wonder technology of the era.

It was also known as the “Jerusalem of the East,” because Christians constituted some 30% of its population. By the standards of its era this was exceptional, since in the colonial times Christians constituted less than 1% of the total population of Korea. There is a bit of a historical irony in the fact that a city with such pro-western and pro-Christian tendencies became the capital of a fervently Stalinist regime.

Pyongyang after bombing during the Korean War.

Not much remains of the old Pyongyang nowadays. In 1951-3 it was literally bombed out of existence by the U.S. air forces. By the end of the war, not a single building survived undamaged and most of the city had been transformed into a landscape of broken bricks and charred wood. Most of the pre-war inhabitants were moved to the countryside where they could escape bombing raids. Not all of them came back.

In the late 1950s, the North Korean authorities began a massive campaign aimed at transforming Pyongyang into the “red capital.” Among other things this meant the forced removal of all people whose personal background was found to be politically suspicious. No statistics are available, but it seems that at least a quarter of Pyongyang’s inhabitants were expelled from the city. They were replaced by newcomers who could boast perfect, revolutionary origins.

The massive destruction of the war meant that new Pyongyang had to be built from scratch. The first buildings were designed by Soviet architects and are very reminiscent of Soviet architecture of the late 1940s. Some parts of Pyongyang still look like a Soviet provincial city of the 1950s or 1960s (for example the areas around Sungni, Victory street, until the early 1970s known as Stalin street).

That said, the golden age of Pyongyang construction came in the 1970s. The North Korean economy was in relatively good shape at the period, so the government was able and willing to invest heavily in construction of a showcase capital. It was the time when the arch of triumph, the Juche Tower, and the Grand People’s Study House and many other monuments and public buildings were erected.

The following 20 years were a time of hiatus. Economic crisis made further construction impossible, so the image of Pyongyang is essentially frozen in time: with a few exceptions it still retains its image from the late 1970s.

There have been some recent changes though, for example the mamouth pyramid of the Ryugyong hotel, which has remained unfinished since the late 1980s, was recently covered with glass. But in general Pyongyang looks increasingly old-fashioned. It embodies the vision of a perfect Stalinist city, but this vision is by now some forty years old.