After watching the now stratospheric speech by Panti Bliss in the Abbey theatre I had an uncomfortable feeling. Why was ‘she’ so angry at ‘me’? Why did she repeatedly utter the words ‘I check myself’ almost to the point of complete irritation. Why was I so annoyed?

If you don’t have the patience or interest to read this full piece, no problem; here’s my opinion now. Same sex marriage should be allowed, the laws changed as soon as possible.

If however you are wanting to know why I am bothered to write this, well read on.

The Panti speech was brought about by her alter ego’s (Rory O’Neil) appearance on RTE television. There he was asked about the Iona institute, a confederacy of dunces if ever there was one. The institute is a group based in Ireland who are against gay marriage are keen to uphold the sanctity of tradition. He referred to John Waters(guardian of all things traditional and father to a pop singer’s love child) in Iona as a homophobe and subsequently the broadcaster had to get the chequebook out to appease Waters and the institute.

Now all this publicity was doing very little for any policy changes, except to unfairly fill the coffers of Waters and his cronies. Seeing this, many people took to the streets outside government buildings to protest in a sea of rainbow coloured flags and pink t-shirts.

Inside Leinster House there seems to be an overriding feeling that things have to change and change quickly. Then again only the liberally minded have spoken. It is surely a no brainer right? If two people want to convey their love via marriage what’s the problem? Well yes you would think that but then you would ignore the reality.

It is thought that this law will pass through with much less fuss than last year’s emotive abortion bill, but personally speaking I have my doubts. Like so many C-list celebrities in Ireland, Rory O’Neill and David Norris are charismatic and generate polite applause wherever they go. Both have been responsible for bringing gay issues to the fore time and time again and that is to be admired. Vitally both are extreme attention seeking extroverts; neither of whom faithfully represent the community they wish to serve.

But they’re only human, and if half of Hollywood pretends to fight for human rights in Africa, whilst somehow always managing to keep themselves in the limelight, then good luck to them.

Ultimately if this change in marriage law is to come to pass it will not be because some drag queen’s video went viral. Despite Panti’s plea for the rest of us to take a long hardlook at ourselves we will all walk into the voting station that day and tick a box for yes or no.

Ireland likes to think of itself as forward thinking, modern. Those days of Catholic guilt have long since passed. And yet how often do you see a gay couple holding hands in public, either on the streets of Galway, Monaghan or Dublin? Most of us wouldn’t be offended to see it and yet the prevailing mood in the LGBT community is that they feel it is unsafe to do so. Even still we are all pretty certain that this new law will be rubber stamped? Something isn’t right there.

If I was running this campaign I would immediately enlist the help of some people who I can connect to. Everyday people with everyday jobs who don’t call me names because I am taken aback by their cocktail dress, six inch heels and five o clock shadow.

So you’ve gathered by now I am a homophobe. Well if drag queens make me uncomfortable then yes I guess I am. I’ve been called worse. It doesn’t mean that I want things to say the same, that I don’t want to evolve. That I admit I am wrong when I use the words ‘gay’ and ‘faggot’ without thinking.

How do I sleep at night? Well quite easily. In the realm of things calling people names is not that big a deal. Then again I am not in a minority. The last time I was when I lived in Asia for a year and as a white man was called ‘bule’ by the locals. Was that racist? Yes but I wasn’t offended. Aren’t I great?

For people who do get offended by being branded a homophobe well you’ve had it for all of three weeks. Try a lifetime of hurtful abuse, that much Panti Bliss was exactly right about.

Persecution or even the thought of not having your opinons heard is a scary thought. Look at how many people come out to vote nowadays. We don’t care until we’re insulted. And yet if the vote was taken away from us tomorrow there would be an outcry.

A lot of people reckon this referendum will be a nice smokescreen, a chance for the government to gain to some credibility before hitting our wallets with new taxes. Maybe that’s true.

But if there’s anything going on it is that there is just a slight(and long overdue redress) in the balance of what it’s okay to say and not say. The majority of the gay community is fighting back because they are frustrated. As tax paying citizens of this country they want to have the same rights as everyone else. They don’t want to be told what to do in their private lives or that their relationship doesn’t mean as much as a man and woman’s.

On the other side the more traditional point of view, led by zealots from the likes of the Irish Catholic and Iona institute. They will run on the ticket of the nuclear family, mother and father with two kids, the whole bit. They feel that adoption will become some kind of transfer market akin to deadline day on Sky Sports, well that might be interesting to watch.

These two are going to be at loggerheads for the next year and a half until the referendum takes place. Us, the disinterested majority will stand in the middle, some of us mildly entertained others reaching for the remote to change the channel.

And the crazy thing is, we the apathetic many will decide, just by sheer numbers. Can you imagine that, your life being shaped by someone who doesn’t care either way?

A lot of people will only give their opinion on that ballot paper, when it is confidential and quiet to do so. 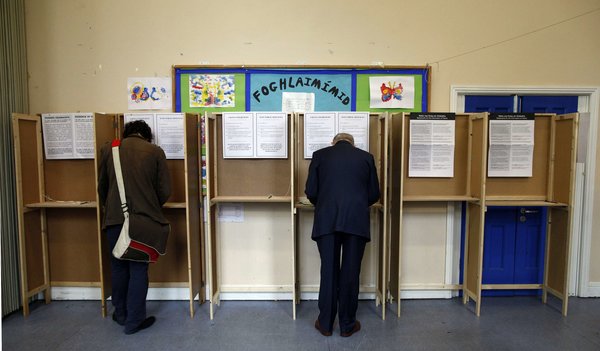 My parting advice to the reform alliance parties out there is to get prepared. Prepared to bite your tongue and choose your battles wisely. Don’t assume that because you are right that you will win. Do not lower yourself to the dark arts of guilting the public into voting your way. Worse yet don’t play the ‘it doesn’t matter and it won’t affect you’ card, the last thing this nation needs is another excuse not to go down the road to vote.

Learn to appreciate the art of charm, something which always seems to go down well in Ireland for some reason.

I hope you win.

I watched the Panti video one more time whilst writing this. Have to say I began to warm to her.. Maybe I just needed to get used to her.

This post is guest post. For more on guest posts and how to submit pleasefollow this link.

Hi, my name is Ray and I live in Ireland. I am slowly learning how unfair life is and dealing with it accordingly. Currently I live at home with my parents at the tender age of 32, having decided that success and a nice abode of my own was all too predictable. I presently work as an Intern, which in Ireland means, the same as everywhere else in the western world (no job prospects!). My principle interests include observing soccer players secretly laughing at the rest of us, wrestling with the reality that sometimes you’re better off not trying, wrestling full stop oh and fast food, consummation and critique thereof. I don’t like long walks along the beach, Monday is my favourite day of the week and if there’s an American TV show out there that you love and can’t stop talking about chances are I probably despise you.