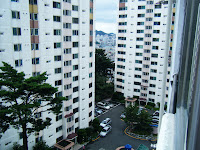 We’ve been in our new apartment for about two weeks now and I thought I’d share some of its mod cons:
We live on the tenth floor of an 18 storey block in Dong-bu Hyundai, Sajik-dong in an apartment - paid for and allocated by our school - which is thankfully somewhat more spacious than the typical studio deal dished out to most foreign teachers. We have been told that before us a family lived here, meaning it’s just about large enough to house our space hungry western asses, consisting of three bedrooms, a bathroom, a living room/kitchen and a balcony.
Our building is a pretty cheek to jowl living space. In Glasgow we’d go for weeks without knowing anyone else shared our tenement, but here we have constant reminders of the lives stacked above, below and either side of us. Cooking smells waft in and out like an over-familiar visitor, while the triumphs and torments of nightly recorder practice seep through the walls like rising damp. Last Wednesday evening, as Korea was soundly defeating America in Olympic Baseball, I muted the TV and to my surprise heard a loud cheer all around me. Baffled at first, it soon struck me that the cheers were coming from individual apartments.
Straddling a long, sweaty climb, the area itself is pretty much as far into the hills as you can go without living in a temple, meaning our location can be problematic. Only one bus comes up here, a little number 5 that powers up and down all day like an ajuma workhorse. The bus takes about 10 minutes to get to the subway, but to get to school we must take a taxi – an inexpensive mode of transport but one that landed us in some inconvenient places until our Korean improved. Dong-bu also boasts a few shops, a bakery, an expensive looking restaurant and what I think is a brothel; not exactly Seomyeon but enough to cater for the day-to-day needs of most residents.
Even further up the hill a path winds into the mountain, past a Buddhist temple – a striking but not unfamiliar sight in Busan – and up in amongst the trees. From here there are some pretty sweeping views of the city. Far to the south a suspension cable from the huge Gwangali bridge is just about visible behind one of the green topped mounds that poke above the surface of the city like islands, while farther away still the black line of the horizon marks the Sea of Japan from the sky. From here the city slowly tapers inland, wrapping its way around the bluffs and hills before hazily meandering out of sight to the north.
Despite the accessibility problems I’m growing found of our little neighbourhood. It’s nice to back on to the mountain, and be able to see both green and city from our modest balcony, and I’m pretty sure we’ll soon start to recognise some of our Korean neighbours who smile politely at the Waygooks in their midst. Although if given the choice, I’d definitely live somewhere more central, for now at least, Dong-bu will do.