Skip to main content
The highlight of grad student life, apart from graduation, is when you get to go to a conference. The idea of a conference is to present your work and see what others have been up to. Although the tangible benefits of conferences are difficult to measure, to even question whether they are worthwhile or not is taboo. The reasons are threefold, (1) It's an excuse to travel (2) It's paid for by your academic institution and (3) There's drinking involved. 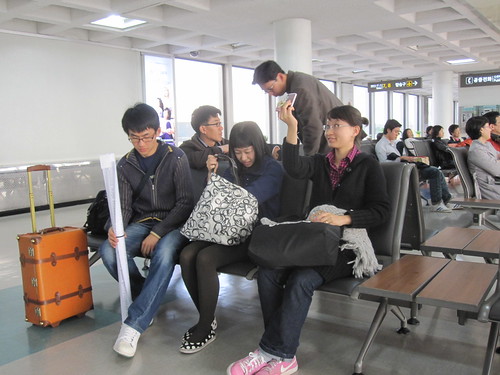 The first conference I ever went to was to Ballarat in Australia, which was pretty good. Recently I went to my second conference here in Korea, for the 2009 Korean Society of Plant Pathologists fall meeting, and the 1st symposium between Japan and Korea. We went to Kimpo airport in the morning and teamed up with our lab colleagues from Daejeon and Sejong University. 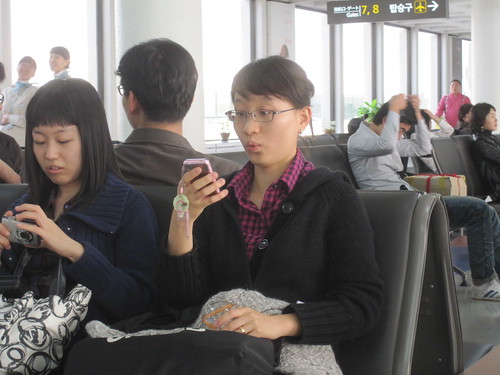 One of the things Se-Kyung likes to do, constantly, is take photos of herself on her camera phone. It's quite common in Korea, for girls especially. I do find the behaviour somewhat curious, but it seems to keep them happy. 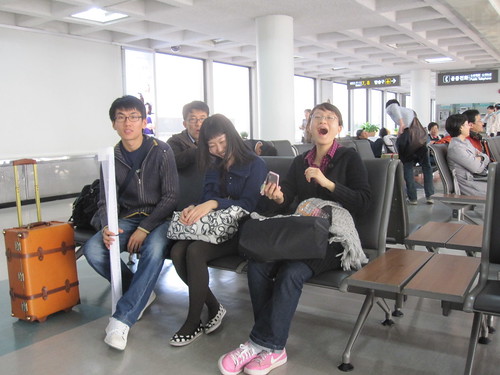 And this is Se-Kyung's reaction when she realises I've been documenting her unusual behaviour. 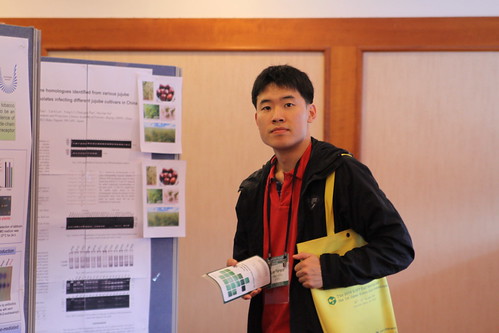 This is me, wandering around the poster displays with my complimentary symposium paraphenalia. The conference was held on Jeju Island, which is Korea's version of Australia's Tasmania.
Or America's Hawaii.
Scientists will create posters for displaying their unpublished work at meetings. Usually they're crammed with details and a lot of effort is put into their creation. And then when they're on display, people just wander past them, and you might be lucky to have one or two people who are remotely interested. 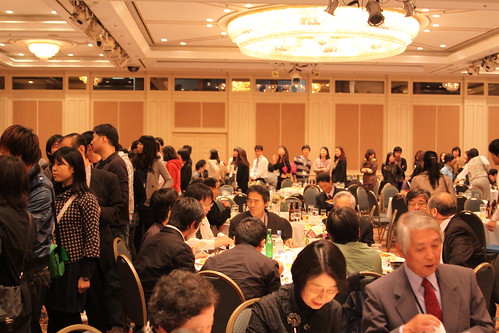 I made an effort to network, but it's pretty difficult when most people are working on things that you don't know much about. The sciences in general become very specific to the point where only people in a very narrow field will be able to understand your particular project in any detail. I met a virologist from Tokyo University and we struck up a conversation. But it's hard to keep the ball rolling when you get a sentence like "Yeah, I've been studying post-transcriptional gene silencing in TBSV for 7 years now."

The correct response to that sentence, which I appropriately gave, was "Really?" 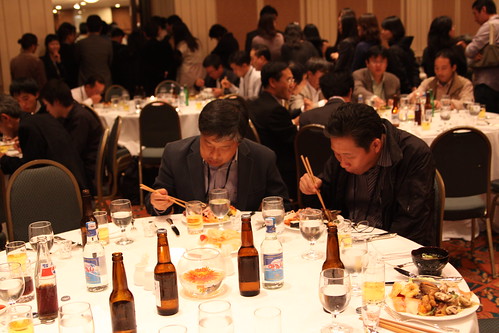 Here's our professor eating with Professor Moon from Daejeon. The predominating topics of conversation between two such quirky intellectuals range from future project funding to the work of colleagues who I've never heard of.

Not that I would think of eavesdropping on two academics in the midst of feeding. 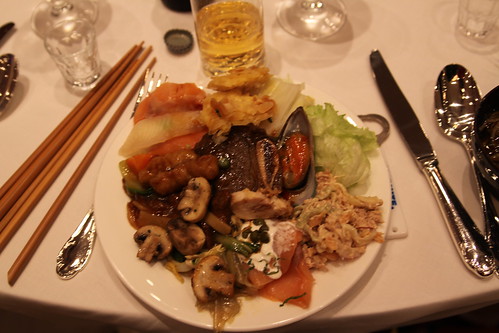 And this is my plate. The problem with buffets is that because they have everything to choose from, you never know what to choose. 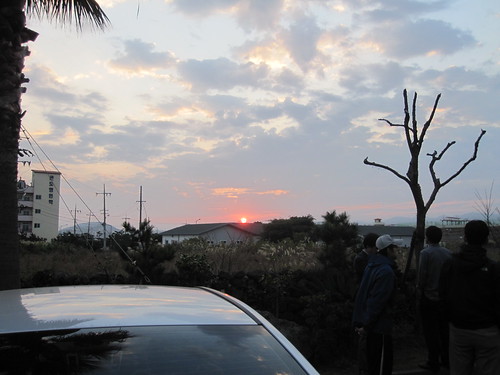 We regularly woke up at 6am, which professors seem to be fond of. It had been a while since I saw the sun come up. 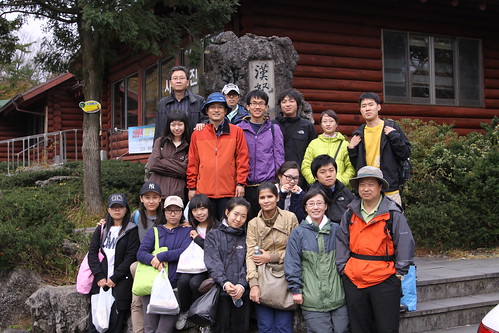 Here are the combined lab groups of SNU, Daejeon and Sejong University at the base of Mount Halla. We all get along pretty well, although our work is only loosely related. 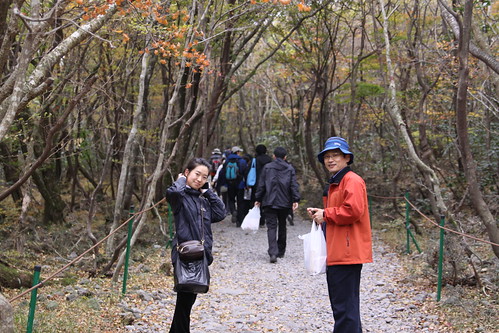 We climbed Mt Halla, the tallest mountain in South Korea, which ended up taking us around 7 hours for the round trip. In the photo above is Jae-Eun on the left and Professor Jwa on the right. They're from Sejong University and I go to their lab every once in a while to use their microscopy equipment. Their lab group is one of my favourites because they're friendly and helpful. 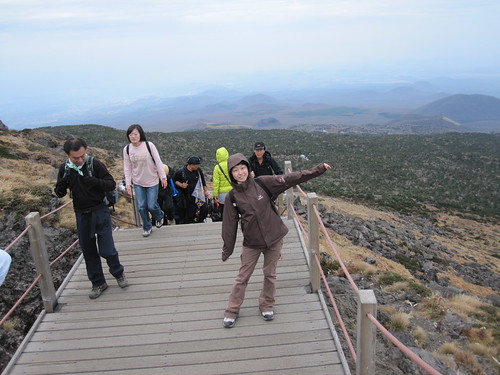 This is Eun-Hye. She exercises in the gym regularly during the week, so when we go hiking she's usually walking up in front somewhere.
Back when I was in the Scouts, we used to designate a 'Tail-End Charlie', whose job it was to walk slowest and make sure no one gets left behind. So as long as you could see the Tail-End Charlie, you knew that everyone was still close by. 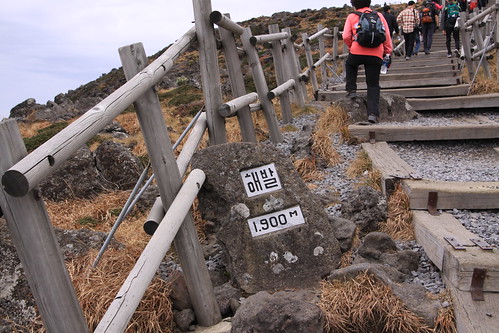 Mount Halla is a massive shield volcano that erupted thousands of years ago. The hike up to the top is worthwhile, but it will take you a day to complete and probably 2 days to recover from the ordeal. The mountain is a cultural icon and a popular tourist destination so the local council have been constructing walkways that make the climb a little easier. 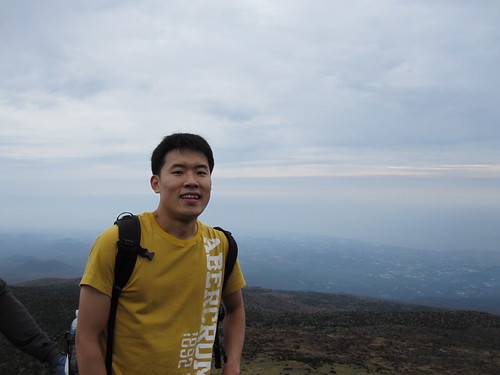 I carried up four litres of water, due in no small part to my hiking experiences in Australia. But the weather was freezing cold and I ended up bringing 3 litres back down with me.

Better safe than sorry, as my old man used to say. 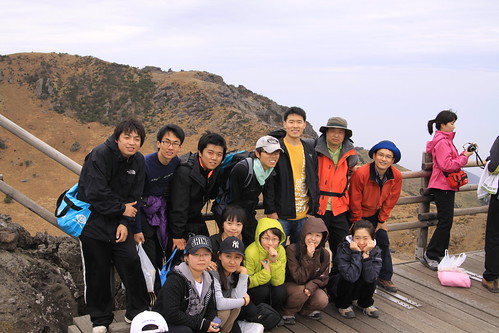 What do you do when you get to the top of a mountain? Look around for 2 minutes and then take a group photo.

The foremost reason being so that you can have fun in the lab later, tagging everyone on Facebook. 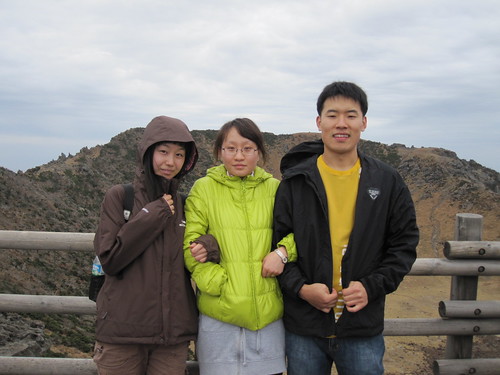 Here's Eun-Hye, Se-Kyung and me. In the lab they often talk to me in Korean, a little too fast. I'm lazy with languages, so often I can't keep up with what they're saying. When I don't concentrate properly, they sound to me like clucking chickens. 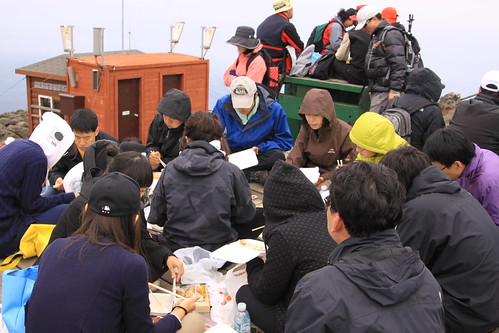 We all brought up a dosirak (Korean lunchbox). It had a whole fish in it, and some dried squid and other unidentifiable things. When you've been walking for so long, you lose the motivation to question otherwise questionable food.

Which reminds me of an old Indian proverb "To the man who hasn't eaten in three days, the only god is bread." 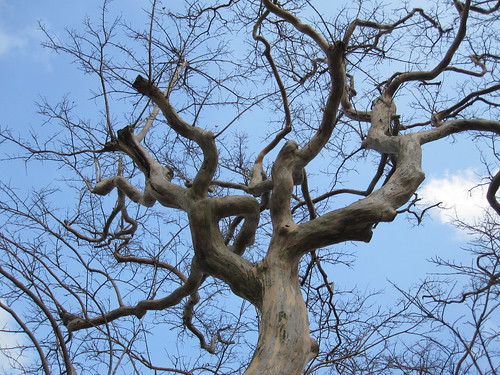 My friend Hong is getting into photography these days, which reminded me of the times when I used to be a bit of an amateur photographer as well. To get some nice photos, you just have to be in the right place at the right time. Tree branches against the sky always work pretty well. I like the way they appear as some kind of distorted organic fractal pattern.

Fractals occur when you have simple repeating patterns, which can actually be expressed as a maths formula. The reason we see them in nature is because crystal lattices, snowflakes and even DNA are bound at a very fundamental level by simple mathematical rules. At the heart of all applied sciences is the most purest form of logic, which is mathematics. 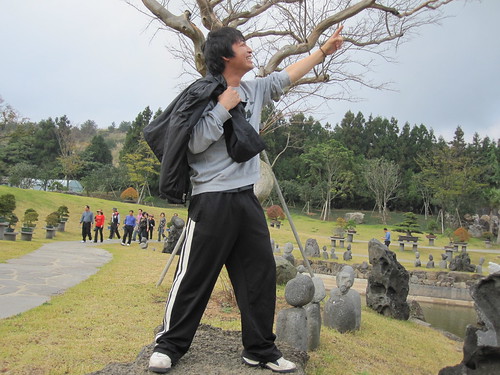 Sang-Min from Daejeon was also keen to be involved in photography. He wanted to pose on this rock, so I told him to point at the sky to add a dramatic atmosphere.

Didn't really turn out the way I expected though. 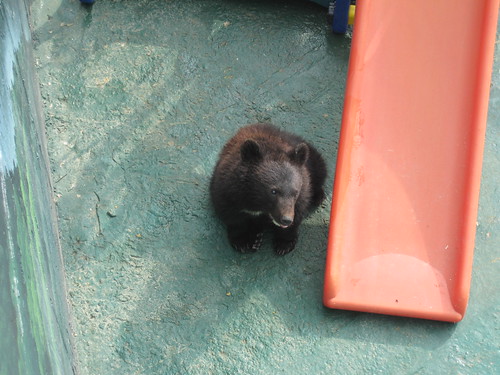 And this is a bear next to a slippery dip. Nothing unusual here. 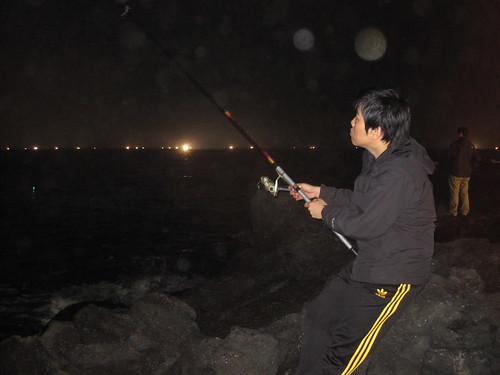 That night we went fishing. Fishing is one of my official hobbies, although I've only been about three times in my life. One day, when I have time, I think I'll buy a nice little boat and go fishing on Sundays. In the photo above is Yun-Seong, from Sejong University. He's a nice guy and we once ate barbecued intestines together.

Anyway, Part II of our conference in Jeju coming soon!