Looking for inspiration? You’ve come to the right place!

Ancestors have passed down their wisdom in Korea for centuries through their traditional Korean proverbs, and over the years Korean sayings and idiomatic expressions which have links to Western adages have come into common use.

At 90 Day Korean, we call these sayings and proverbs “Sagely Sayings,” and today we’ve rounded them all up into one place!

Here, you’ll find some useful Korean proverbs and sayings that you’ll be able to make use of in your everyday life! Below each, we’ve outlined examples of situations you could use them in – and as you’ll see, these explanations are more necessary for some than others!

In cases where there is a Western equivalent or a similar expression in English, you’ll see that we’ve translated it into its Wester equivalent, but the literal translations are also included so you can also use them as a study tool.

So sit back, take a deep breath, and get ready to be enlightened! 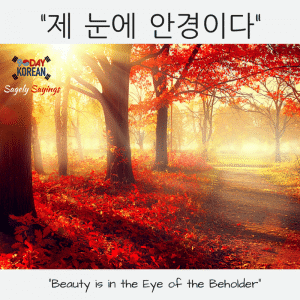 Meaning: Beauty is in the eye of the beholder

Literal Translation: Glasses in my eyes

When to use it: Have a friend that sees someone they think is attractive, but you don’t agree? See beauty in something/someone that is not traditionally attractive and others can’t see it? Use this phrase to suggest that the glasses we see with are all different. 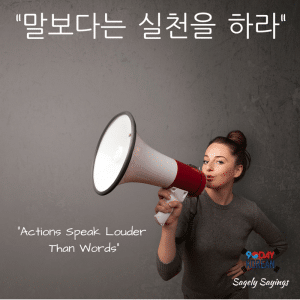 When to use it: This can be used in any situation which you want to motivate another to get something done. For example, a mother could use this to their school-aged child to get them to do their homework instead of just saying they’ll do it later.

Literal Translation: Rome wasn’t made in one morning

When to use it: Like in English, this is used to remind someone that you cannot expect to do important tasks really quickly, and that quality work takes time. 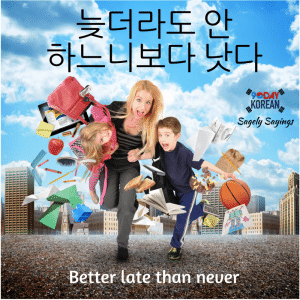 Literal Translation: Late is better than not doing

When to use it: You can use this phrase in cases when you think it’s better to do something late than to never arrive or happen, like arriving to an appointment. 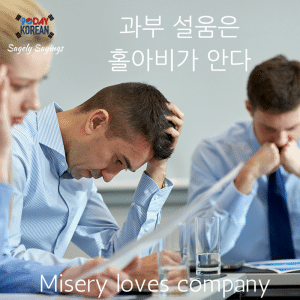 When to use it: To express the idea that people who are unhappy like to express their emotions to others or are comforted by the unhappiness of others, like a student who gets detention who tries to get others in trouble so they don’t need to serve it alone! 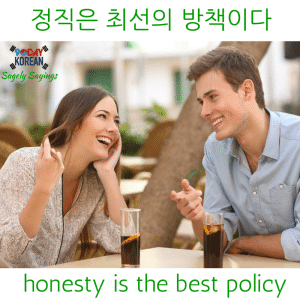 When to use it: To express to someone that telling the truth is the right thing to do, like a girlfriend who caught their boyfriend skipping Korean class!

Meaning: Out of sight, out of mind

When to use it: To express the idea that when someone or something cannot be seen, it is easy to forget them or forget about that thing. It could be used to describe a couple who is having troubles in a long distance relationship. 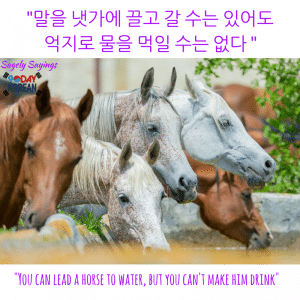 Meaning: You can lead a horse to water, but you can’t make him drink

Literal Translation: You can lead a horse and go to a stream but you can’t make it drink water through its own will

When to use it: To express the idea that you can make it easy for someone to do something, but you can’t force them to do it. It may be used by two mothers who are talking about their sons and how they can’t get them to do homework.

Meaning: Two heads are better than one

Literal Translation:  If you lift together, it’s better – even if it’s a sheet of paper

When to use it: To express the idea that it is always best to work together on a task, no matter how easy it may seem. For example, a Korean student could use this expression when they meet a study partner. 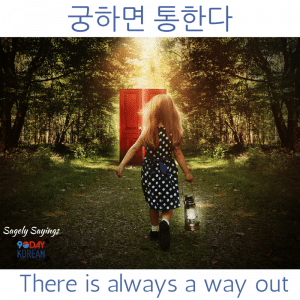 Meaning: There is always a way out

Literal Translation: If you are hard up for something, it will open up

When to use it: In Korean, it is often used to explain motivations for coming up with an innovative solution to a problem, like a man who starts selling his paintings on the street after he loses his job and replaces his income. 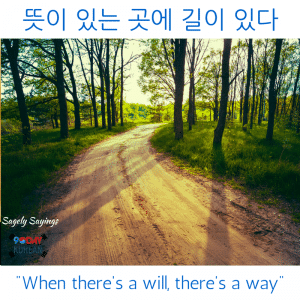 When to use it: It is used to describe situations where one is determined and finds a way to achieve their aims, even if they are difficult. It could be used in a speech or to describe a situation where someone needs to be encouraged to take on a great feat.

Literal Translation: Selling as if they’re flying away

When to use it: This is a Korean equivalent to “selling like hotcakes,” and can be used to describe things that are selling really well, like umbrellas when it’s raining or ice cream on a really hot day! 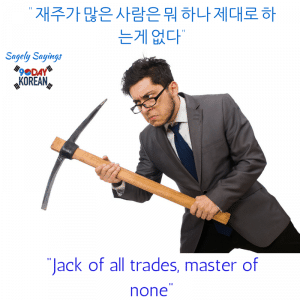 Meaning: Jack of all trades, master of none

Literal Translation: A person with many skills cannot do one properly

When to use it: Use it when referring to a person that is competent in many skills, but never becomes an expert in any particular one because they are too busy learning skills to an adequate level. 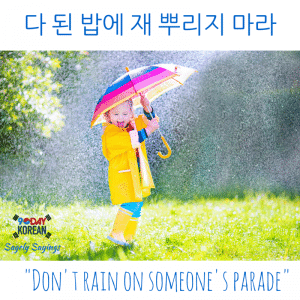 When to use it: Use it to command someone not to spoil another’s plans or ruin a moment, like delivering bad news at a wedding. 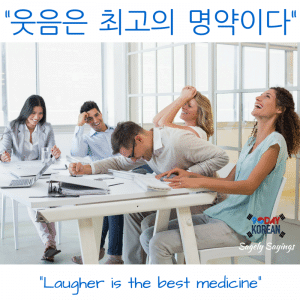 Meaning: Laughter is the best medicine

When to use it: You can use it to suggest to someone that trying to be happy or thinking happy thoughts will help you overcome worry or depression. For example, you could suggest this to a friend after they break up with their boyfriend. 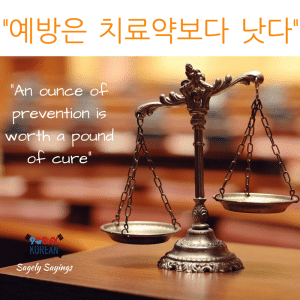 Meaning: An ounce of prevention is worth a pound of cure

Literal Translation: Prevention is better than a cure

When to use it: You can use it to suggest that is is better to try to avoid problems in the first place, rather than trying to fix them once they come up. 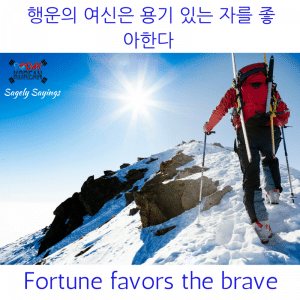 Literal Translation: The goddess of good fortune likes a person who has courage

When to use it: It is commonly used to encourage people to be brave and carry out their plans. For example, a friend may say it to another who is doubting whether they should start their own business or open a shop. 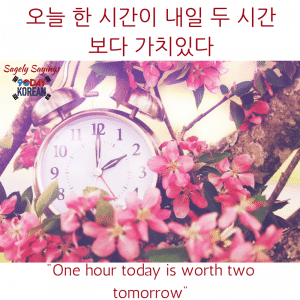 Meaning: One hour today is worth two tomorrow

Literal Translation: There is more worth in one hour today than in two hours tomorrow

When to use it: You can use it to suggest that doing something immediately and taking action, even if it’s not perfect, is better than procrastinating. 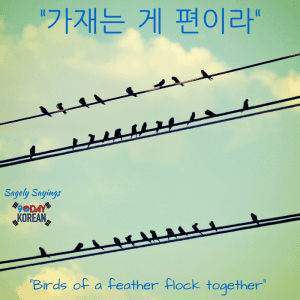 Meaning: Birds of a feather flock together

Literal Translation: The crayfish sides with the crab

When to use it: Since a crayfish and a crab have many similar traits, this saying implies that they would side with each other. Use it in describe the how those who are similar in character, appearance or background tend to stick together. 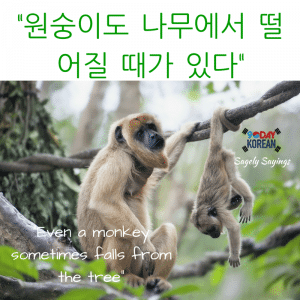 Meaning: Even a monkey sometimes falls from the tree

Literal Translation: There is a time when even a monkey falls from a tree

When to use it: Use this expression to suggest that even experts sometimes make mistakes. Monkeys are great climbers, but sometimes fall. If a friend is really beating themself up over a mistake, use this to suggest that mistakes happen.

We hope you’re a tad wiser after reading through these Korean proverbs and idioms, and we’ll hope you’ll put them into practice. We’ll continue to add to this list over time.

Which was your favorite? Which piece of wisdom could you apply to your own life at this time?

Let us know in the comments below!