What would you answer if a person asked you how to say “how” in Korean? Perhaps you’d answer “어떻게 (eotteoke)?” And you’d be absolutely right!

However, there are actually six different ways to use this Korean question word. And it’s quite important and useful to know them to be able to properly write, understand, and speak Korean. 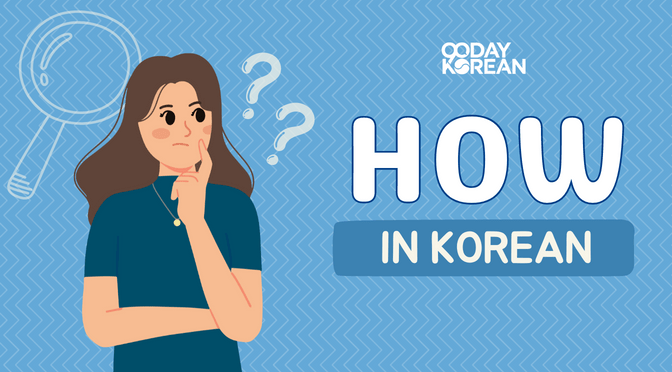 In today’s lesson, we will focus on these different terms for “how,” how they differ, and an explanation for how you can best use each of them with the help of sample sentences. Are you ready to get started? Let’s go!

How to Say “How” in Korean?

As we already mentioned, in the Korean language, there are six different terms for “how.” Below we will go over each one in detail so that you will not get confused between them anymore. Here are the six ways to say “how in Korean”:

This is the term for “how” that you are most likely to already know, and it is also the most commonly used in Korean. It is used when you want to ask about the ways or manners of something.

It can be used in different Korean sentences, and it can be placed first in the sentence but also elsewhere. Typically, it is immediately followed by a verb. Like in these examples:

How do you go home from here?

How did you learn Korean?

How did you know it’s my birthday today?

You can also simply use 어떻게 (eotteoke) as a single-word sentence among close friends or 어떻게요 (eotteokeyo) when you need to be more formal. In that case, you are simply asking “How?”. Most likely, asking how something happened or was possible to happen, but without presenting a full question.

This is the term used for “how” when you want to know someone’s opinion on something. For example, how they’re feeling in the moment, how they feel about a suggested activity, how they think the food they eat tastes, and other similar things.

You can liken it to a similar question to “what did you think about?” in some cases when translating the meanings into English. The verb base is 어떻다 (eotteota). 어때요 (eottaeyo) is the polite way to ask the question, while the more casual 어때 (eottae) can be used among people with close relationships.

As this term for “how” is actually a verb and functions like one, you can also use it in the past tense, in which case it transforms into 어땠어요? (eottaesseoyo?).

How are you feeling today?

“How much” in Korean

The first way of asking “how much?” is 얼마 (eolma). It is quite specifically used when talking about money, including the price of something. It is often used together with the be-verb 이다 (-ida). However, it is occasionally possible to also mark it as the subject or object of the sentence.

Here are some examples:

How much is this bag?

How much is the salary for that job?

This is the other “how” word that’s used to ask “how much” something is. However, it is not typically used to discuss money but other matters instead, like the length of something in years, a person’s height, or other measurable things.

It is typically followed by an adjective or an adverb. You can follow up 얼마나 (eolmana) with the 많이 (mani), meaning many, or 오래 (orae), which means long to make your sentence as clear as possible.

But as the rest of the sentence can imply your intention quite clearly, too, they may not be necessary to include. Here are some example questions in which 얼마나 (eolmana) can be used:

How far is the school from here by bike?

How often do you go bowling?

“How many” in Korean

Below are the terms you can use to ask “how many” in Korean.

This term for “how” is used when counting “how many” there is of something. It is always used as a counting unit noun. 몇 (myeot) can be used in sentences like this:

How many people were at yesterday’s party?

How many pairs of shoes did you buy?

Finally, this word translates quite directly as “how many days.” Therefore, its usage is quite straightforward, easy, and limited. You can use it like this:

From your first date, how many days later did you become a couple?

How many days are left until summer vacation?

How to Pronounce “How” in Korean?

As usual, you can follow the romanization of each of the terms to learn the initial pronunciation:

However, while romanizations are incredibly useful, especially for beginner learners, they are not 100% accurate in pronouncing every word. Thus, we highly recommend learning the Korean alphabet right away and going over Korean pronunciation rules. This way, you can master the correct pronunciations in no time!

Just like 어때 (eottae), 어떻게 (eotteoke) also derives from the verb 어떻다 (eotteota). Thus, if you remember our post on Korean adverbs, you may liken 어떻게 (eotteoke) as an adverb of sorts.

Now, the very similar sounding 어떡해 (eotteokae) might confuse you over the difference between the two or even if there is one. The answer may be a little complicated as there is and isn’t a significant difference.

In fact, 어떡해 (eotteokae) is actually a shortened form of 어떻게 하다 (eotteoke hada). Thus, at first glance, you may think they are indeed the same, just used in different contexts. However, to be specific, 어떡해 (eotteokae) truly translates as “What should I do?”.

I forgot we have an exam today. What should I do?!

Some useful “How” sentences

Before we send you off to practice on your own, here are some useful sentences utilizing the term “how” you may like to learn.

“How are you?” in Korean

Above we already taught you one way to ask a similar question. However, this is perhaps 어떻게 지내요? (eotteoke jinaeyo?) is the most common way to ask someone how they are doing.

We’ve already shown you some great ways to use 어때 (eottae). However, sometimes it’s possible to simply ask your question by saying 어때요? (eottaeyo?) if there’s no need to clarify what the “it” is.

“How was your weekend?” in Korean

You can ask this question by saying 주말은 어떻게 보냈어요? (jumareun eotteoke bonaesseoyo?). Specifically, this question translates as “How did you spend your weekend?”. It is the primary way to present the question.

“How tall are you?” in Korean

Using one of the “how much” words, you can easily ask someone about their height by saying 키가 얼마나 돼요? (kiga eolmana dwaeyo?).

“How far is the drive?” in Korean

Similarly, you can also inquire about the length of a drive by asking 라이브 거리가 얼마나 돼요? (deuraibeu georiga eolmana dwaeyo?).

“How long have you been waiting?” in Korean

To ask someone how long they have been waiting, which is often asked when meeting with a friend, you can say 얼마나 오래 기다렸어요? (eolmana orae gidaryeosseoyo?).

This is a particularly interesting question, as it’s possible to drop either 얼마나 (eolmana) or 오래 (orae) away from it. Although in the absence of 얼마나 (eolmana), it won’t sound strange, as the question transforms into “Have you waited for long?”.

In general, when you want to ask someone “how long” and want to be absolutely clear on it, you can combine 얼마나 (eolmana) and 오래 (orae) together. However, often the context becomes clear even if you drop 오래 (orae) from your sentence.

Wow! Today we have learned so much new vocabulary and grammar. And yet we were going over just one simple term! How many of these terms for “how” in Korean did you already know? Tell us in the comments!

And if you still have the energy to keep learning Korean with us, how about we go over the other Korean question words next? It’s up to you which among “who,” “when,” “what,” or “why” in Korean you’d like to know more about. Happy studying!

The post “How” in Korean – Using this question word in many ways appeared first on 90 Day Korean®.