What comes to mind for the average person when they hear Shanghai? I asked a few of my coworkers and I received a series of answers ranging from “bustling” to “retard zombie apocalypse.” Others just couldn’t capture Shanghai with such brevity, and instead replied with thoughtful phrases such as: a foreign business infested toxic dump; a filthy Venice with canals in lieu of sewers; Disneyland for alcoholics; and something akin to a foreign trash refuge.   It is a busy city and certainly not the cleanest.  The weather also isn’t famous, the food is alright, and I’ve only had food poisoning twice this year.

I live in Shanghai and, more specifically, the Former French Concession.  Like the artist formerly known as Prince, this area has been proudly decreed a former.  Naturally, like most linguistically lazy people, I would usually leave out the former part and stick with the latter until one hateful text message from a realtor set me straight.  The story goes a bit something like this:

After being asked where in Shanghai I was interested in living, I responded with the French Concession.  It has nice restaurants, tree-canopied streets and foreigner friendly shopping. There’s a night life, a café life and interesting sights for avid people watchers who want to sample a mix of humanity.  Living here just made sense to a former resident of Seoul’s Itaewon.  However, my realtor didn’t share the same sentiments.  Her response was something like, “You can get in a lot of trouble here (China?  Shanghai?  Her smoke filled office?) for saying that (does everyone here hate the French too?).  After responding in a polite yet firm, what the *%&$ are you talking about, she went off on some nationalistic rant about how China’s growing and doesn’t need help from colonialists etc.  Being an American who endured the Fox News Generation, followed by a few years in South Korea with lots of practice in dealing with fallacious, “my country is better than yours” rants had prepped me well for maintaining a mask of indifference.  I wasn’t really bothered by the content of this experience so much as its conclusion: I was going to have to find a new realtor.

Needless to say, I eventually found a realtor more concerned with making money as opposed to splitting hairs over the names of neighborhoods.  They only charged me about a hundred dollars more than any other foreigner living in the 30 floor building and that’s not bad given the norm here.

Old Shanghai and the French Concession

So, how did the French come to Shanghai and how did they pull off getting their own “concession”? First off, you have to understand a bit of history.  China lost the Opium Wars against the British.  The name of the war is misleading, as the biggest reason for Britain’s navy laying waste to China’s “coastal defences” was for free trade. By free trade, I mean the kind that favors the guys with the biggest guns.  One legacy of this is that China opened up to trade, and that’s where Shanghai comes in.  It’s a port city and that’s where a lot of this “trade” trade would happen effectively putting this city on the map.

Another legacy from the war was that China no longer had jurisdiction over foreigners within its borders.  So, not only were they forced at gunpoint to trade with Western powers, they were forced to play nice and let Westerners live there without being subject to its very own laws.  Thus a concession was born.  While I am now subject to China’s laws and preferred titles (add a former or beware), I still get to see old-school architecture and am subject to the international vibe that has so far charmed me into staying.

On any given day, I walk out through the gates of the first floor onto the street, and fall under the shadow of the birch trees that uniformly decorate the sidewalk.  If the size of the trees is any indicator of age, many of them have been around for quite some time—perhaps even when you could still call this the French Concession without the threat of being verbally abused.  Beyond that, in the late 1990’s, even more trees were planted as part of a “beautification” project.  One of the Shanghai slogans is “Better City, Better life.”  Yet I think beautification might have been a codeword for pollution-fighting which means a better catch phrase would be “Less pollution, less cancer.”

The journey to the metro takes me past a dodgy massage parlor that proudly displays its number in plain view in case you want a “house call” to be made.  Brave joggers with and without masks can be seen hitting the streets early and skillfully dodging neglected piles of dog dung. The name of this street is Hengshan Lu and it is a landmark street that cuts through the Concession and is the savior for many a foreigner with meager language skills looking for holy ground.  Taking in the entirety of Hengshan Lu is impossible as it snakes through the heart of the Concession formerly known as French.  Near the metro exits, multiple bars with patios decorate the corner offering specials that only a tourist would consider a good deal.  However, it is not common to see foreigners here (ever) because they are over-priced and rely on the ignorance of travelers as opposed to the clientele of the foreign community.  Another possible sight early in the morning are inebriants still up from the night before.  These characters range from college students to beer-stained businessmen. Depending of what kind of person you are in the morning, such sights can cause comic relief or grumpy annoyance. 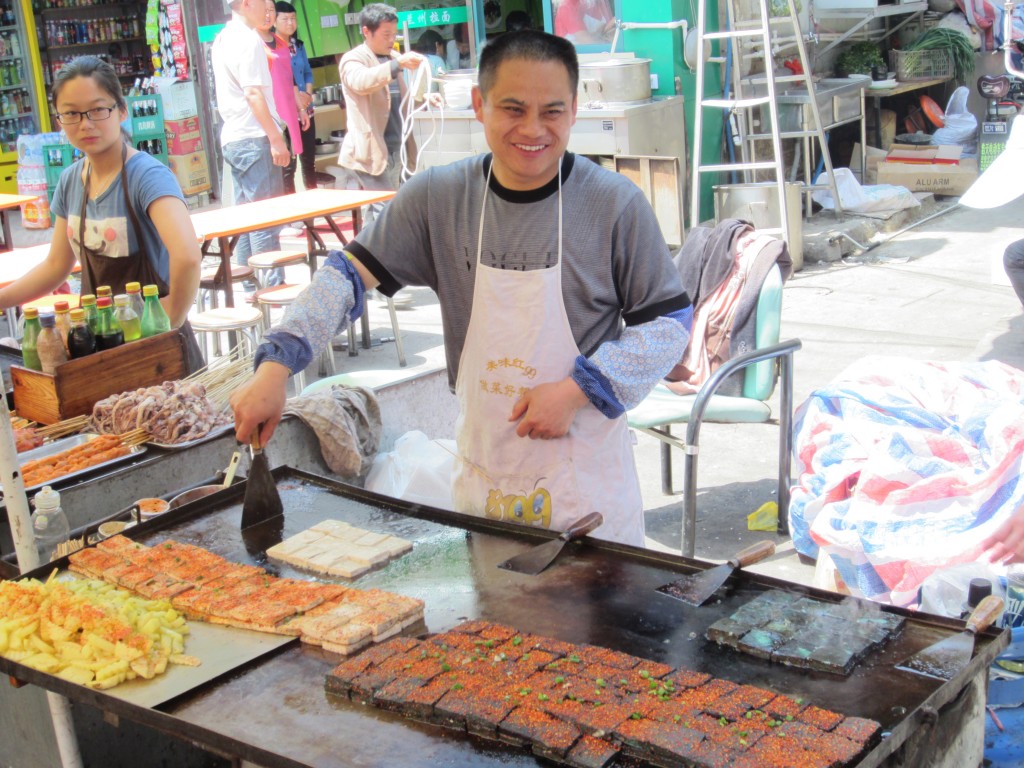 Lastly, if you happen to spill out of these same exits in the evening you run the risk of having your precious oxygen invaded by the foulest of smells: the dreaded stinky tofu.  As if the pollution was not bad enough,  an ill-timed commute home can assault one’s senses further.  While locals seem to embrace it as a delicacy, I dry heave at the very thought of it.  The smell is in a league of its own but if I had to describe it, I would say it’s a mixture of hot garbage and neglected dumpster rot (or a dead ape as some smelly French cheeses are compared to).  Vendors set up shop where the stairs meet the streets in hopes of dumping something that belongs in a toilet (IMHO) in your hands.  Nevertheless, though some French might turn up their noses and say “ew!” or “déguelace!” I have to believe they’d enjoy walking around their Concession, former or not.

In the next installment, the author will cover what happens when the sun sets and some of the unsavory characters and sights emerge that provide the yin in contrast to the music and funk-laden savants who provide the yang. 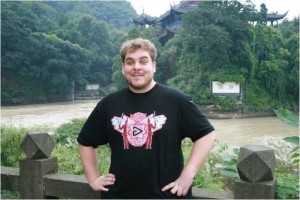