Today, we’ll be learning how to say “baby” in Korean. Previously, we already covered the topic of Korean family terms. Although “baby” wasn’t one of them, of course, babies are born into families every single day. So shouldn’t we all know how to say it in Korean? 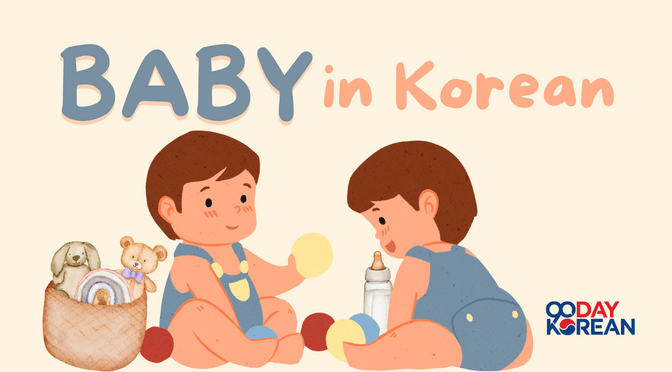 Alternatively, “baby” is also a common term of endearment and even a way to describe someone. Many boyfriends and girlfriends like to call each other baby. Or someone might act cutesy or childish, just like a baby.

Therefore, there are a few reasons why you might want to learn the Korean word for “baby.” And today, we shall finally learn it together!

Different ways to use the word “baby” in Korean

Now, as we already glossed over, there are numerous different Korean words to say this noun. It all depends on context!

Official translation for “baby” in Korean

The first word for “baby” is 아기 (agi). This is also considered the official word for baby. Thus, it may be one that’ll be first to pop up when you search for “baby” in dictionaries, for example. It is also applicable to use in many cases. You can use it whenever you are talking about infants, including baby animals. However, it is not a term of endearment.

The second word for “baby” is 애기 (aegi). This is a cutesy way of saying 아기 (agi) and is also considered to be rather informal. It can be used when referring to infants – including baby animals – when you want to be cute.

However, this can also be used as a term for endearment with your loved ones. In that case, its meaning may also be “sweetheart” rather than “baby.”

The third word for baby is 아가 (aga). This is another one that is commonly used, although it is not the official term, so you might have heard this used in K-dramas. It is also used in a more affectionate way and to refer to the infant in an adorable way, although it’s not quite as cutesy as 애기 (aegi). If you have a child or children, this is what you can call them.

“Baby” in Korean as an endearment

The fourth word for “baby” is 베이비 (beibi). With how it is pronounced (be-i-bi), it’s definitely easy to remember. This is the Konglish way to say “baby” in the Korean language. You can use this to refer to babies, as well as a term of endearment.

However, a more popular word of endearment for “baby” in Korean that you might hear is 자기 (jagi).

Other words related to “baby” in Korean

Below is a list of words related to the topic “baby,” which you may find useful to learn.

Finally, here are some sentence examples to get you started with using this new vocabulary with their translation in English.

Wow, what a cute baby!

What do we need to buy for a baby?

Hm… We need to buy a pram, a crib, and some dummies, to start with. And, of course, we need to buy diapers, too!

Regardless of the languages you speak, whether it’s Japanese, German, English, etc., learning Korean words such as “baby” is quite easy! We hope that with this lesson, you’re ready to talk about baby-related matters and use cutesy terms on a loved one and get a few ideas about Korean culture too.

The post “Baby” in Korean – Use this word in different ways appeared first on 90 Day Korean®.