Today we are back with another quick but useful lesson: how to say “angel” in Korean! 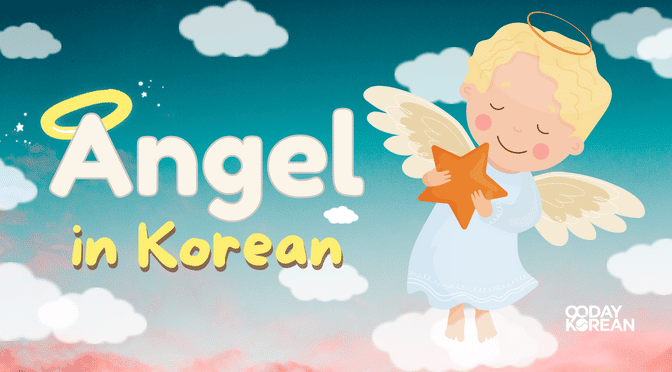 At first glance, do you find this word useful to add to your vocabulary? Perhaps so. Angels are a big part of Christian religions, sure, but that’s not the only context they can be used in. These days angels are also popular mythical creatures to use in different forms of media.

“Angel” can also be used as an adjective when describing someone’s generous and helpful efforts toward someone. Angels are also common decorations to have around Christmas time! Therefore, you may get more opportunities to use this beautiful word than you might think. Let’s get to it!

How to say “angel” in Korean

The Korean word for “angel” is 천사 (cheon-sa). To learn how to write “angel” in the Korean language, your first step is to learn Korean letters by knowing the Korean alphabet.

This is a noun that refers to any type of angel. It can be a person, a decoration, or an angel in terms of religion.

Note that this sentence uses the most informal structure for speaking and should thus only be used with someone close to you. You can use this in situations where someone has helped you out greatly or shown you deep kindness.

This is, of course, possible to also say to someone you are not as familiar with in a similar situation. In that case, you may want to use a sentence that sounds more polite and say it like this:

Instead of 그쪽 (geujjok), you may also opt to use the person’s name or title, whichever is more appropriate.

Other words related to “angel” in Korean

If you want to make it clear you are referring to someone who is like an angel, you can also say 천사 같은 사람 (cheonsa kateun saram), rather than simply 천사 (cheonsa).

Similarly, if you want to describe someone or something as angelic, you may use the descriptive verb 고결하다 (gogyeolhada).

Megan is a really angelic person.

Let’s take a look at the above sentence. “Angel-like” or “angelic” would be their American-English translation. Other ways to phrase the same sentence are these:

Megan is an angel-like person.

Thus, all three are rather similar expressions with each other.

You may also want to use the adjective “angelical.” In this case, the same verb, 고결하다 (gogyeolhada), still applies. This same verb can be used when expressing words such as loyal, virtuous, and noble.

The Korean word for “heaven” is 천국 (cheonguk). When talking about angels, they’re usually associated with heaven.

And now your vocabulary is a few words richer again! In what type of settings do you think you’ll be using the Korean word for angel the most? Let us know your answer below in the comments!

Regardless of the languages used, whether Korean, Japanese, or English, we hope you can find an angel in your life!

If you’re interested in learning more religious Korean words next, check out our free article for religion in Korean! Hopefully, you enjoyed reading through this lesson and found the answers you were searching for. Tell your friends about your newly-learned vocabulary to make learning more fun!

The post “Angel” in Korean – Learn the different ways to say it appeared first on 90 Day Korean®.