I got Lasik surgery here, about a month ago, and I wanted to share my experience with you because it was extraordinary and very satisfying.

Specifically, I took extra care to describe in details about what you need to know to get Lasik surgery in Korea as a foreigner, so I recommend you reading it carefully if you intend to get the surgery.

To begin with, I was very short-sighted, and I even had dry eyes, so I always had Lasik in my mind. But then, one of my friends who just visited Korea to travel told me that he/she is going to get Lasik here in Korea. In fact, I just found out that the cost of Lasik in Korea is only 1/5 of that in Canada! As soon as I learned this, I thought it's an amazing opportunity for me to get it while I'm staying here, so I decided to get it together with him/her.

I asked one of my Korean colleagues for recommendation, and guess what, he/she told me about a clinic where he/she got it in the past. He/she said he/she got a thing called, SMILE Lasik there 3 years ago, and that he/she was so content with the result. SMILE Lasik? I didn't know what exactly that is, but I put it aside for now, and first looked up that clinic on Facebook. And then, I asked some of my questions via Facebook messages. I asked things like, when I can make the reservation, if I can discuss details in English, if I can get the surgery done being a foreigner, and if there are any differences in cost due to health insurance issues. Surprisingly, they replied me in English in less than 5 minutes.

✓      The director of the clinic can do the consulting in English.

✓      It is registered as a clinic where foreigners can get surgery, so it is totally possible.

✓      There is no difference in costs between Korean nationals and

foreigners because Lasik or Lasek surgeries are not covered by insurance 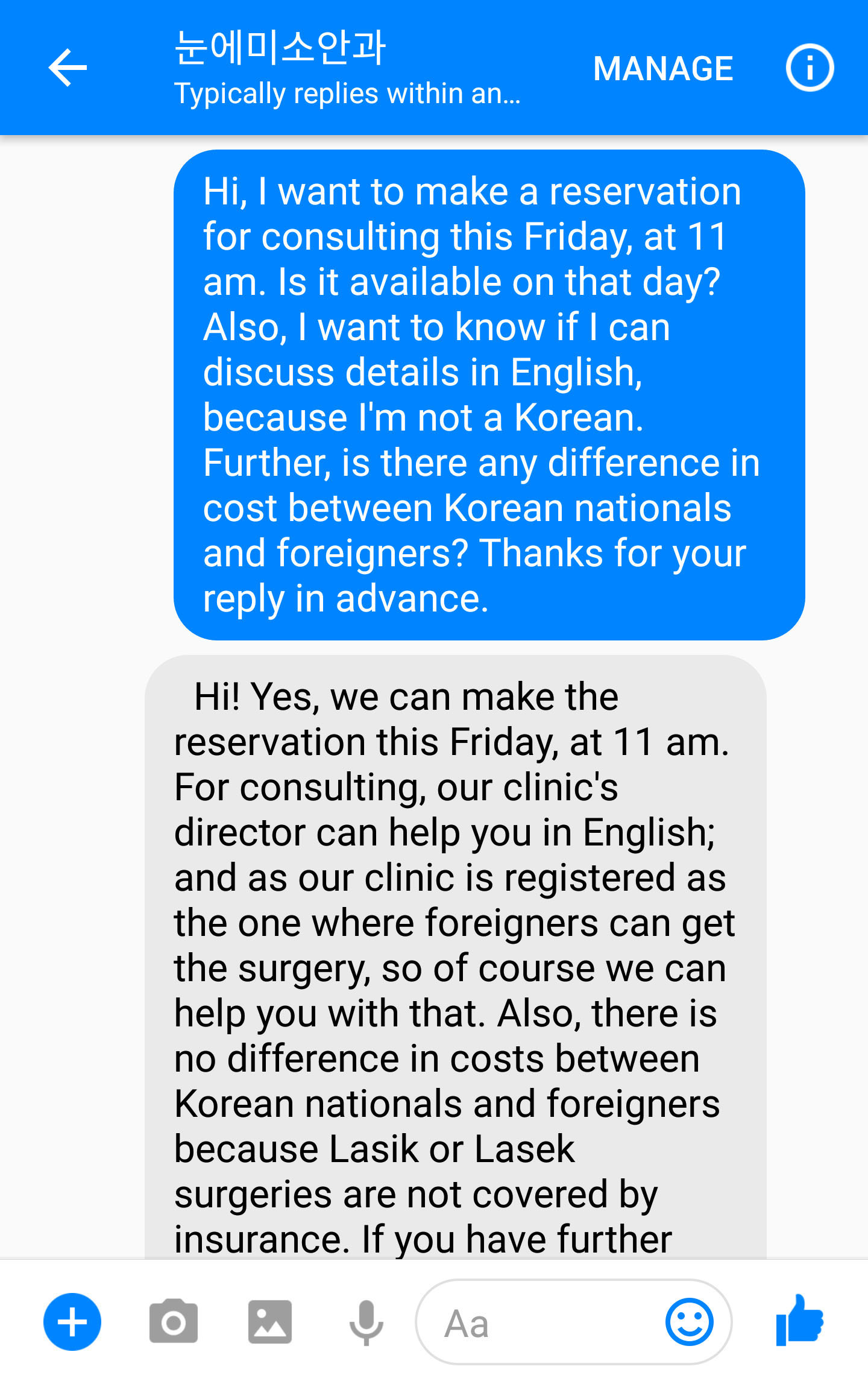 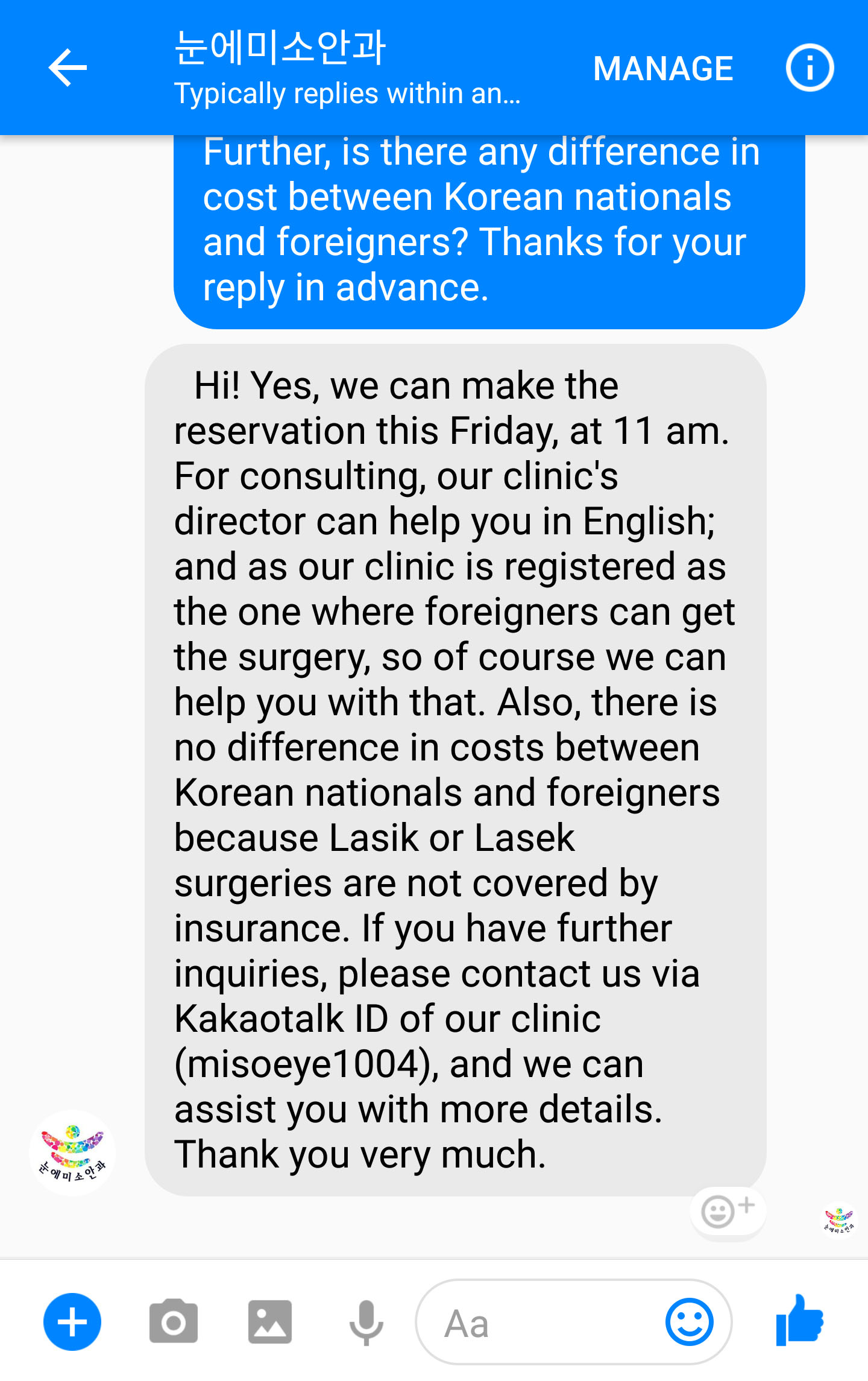 Wow, doesn't this sound so appealing? So, I made the reservation right away.

When I got to the clinic on that day, it was packed with people even in the morning. It took about an hour for me to go through the pre-screening, and I got examined for intraocular pressure, thickness of cornea, and if I have dry eyes. 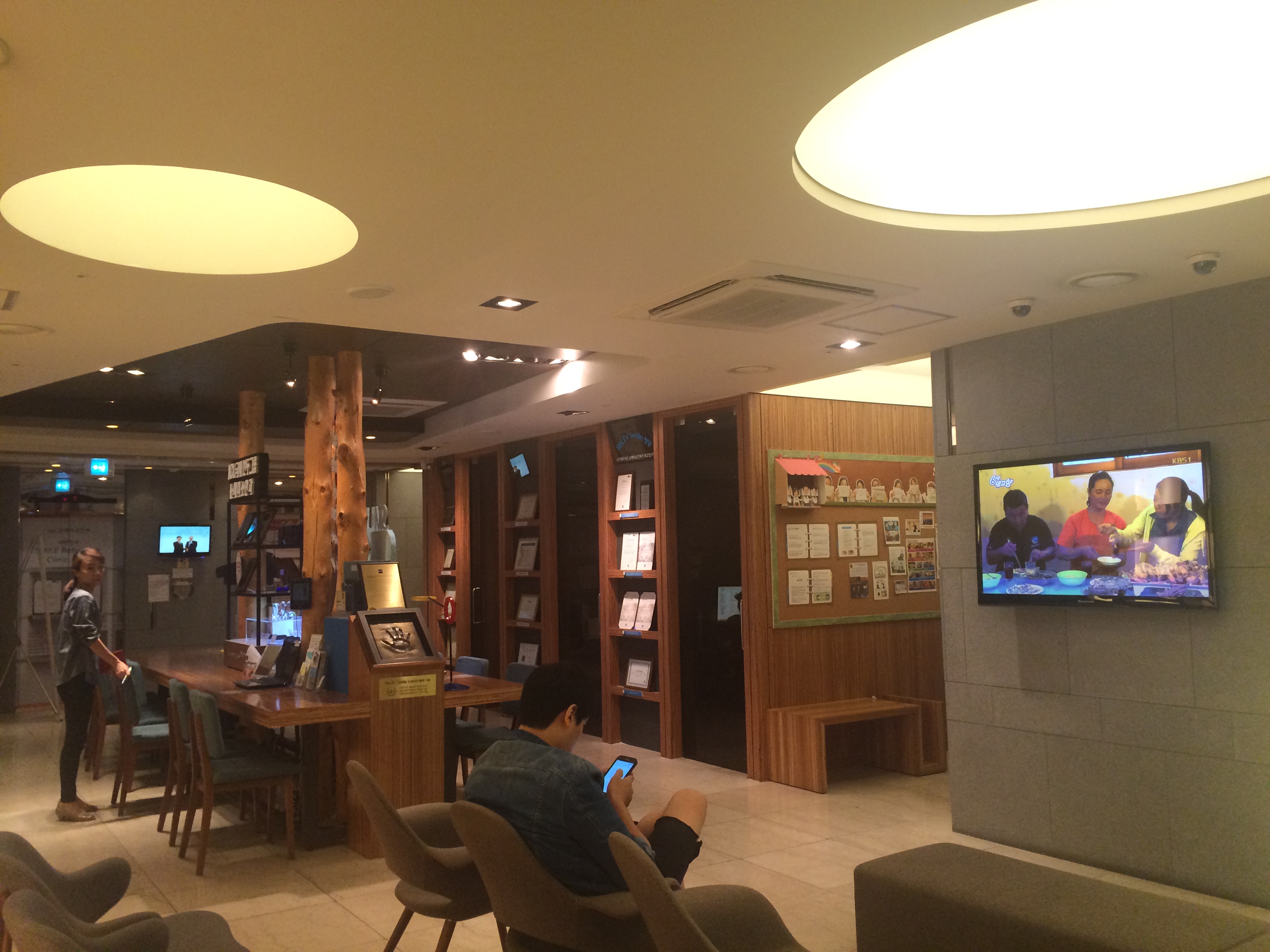 (the clinic looks like this. It doesn't look that terrifying, right?)

After this extensive examination, you will get to meet the director and discuss details. I actually found out that the director of this clinic is a globally renowned doctor in this field of SMILE Lasik. So, I already made a specific request to consult with him/her.

The talk was all in English. And I got to ask every single thing I wanted to ask! These are what we discussed during the talk; I hope it helps.

Q&A session with the director

Q. Is there any difference in surgery between that of Westerners and Easterners?

Q. Which is recommended between Lasik and Lasek?

A. Because more appropriate type of surgery can be al different based on the states and thickness of corneas, so the answer is different for every individual.

Here is what I drew to explain what he explained to me.

Basically, Lasik is to cut cornea to make a cover, open the cover and shoot the laser, and then close the cover. I heard that it is fast to recover, with low cost, but the downside is that it hurts cornea. On the other hand, Lasek is to remove cornea cover using chemicals, and I skipped this because he told me that it’s very painful when you recover. I also asked about SMILE Lasik that my colleague recommended, and he said it’s the most desirable surgery with the least chance of side effects among existing vision correction methods. Almost no pain, and fast recovery.

Q. I’m very short-sighted, and I have dry eyes as well. Is it still okay to get Lasik?

A. Even though cornea is thick enough, in case of excessive myopia, it is difficult to get Lasik because remaining cornea is insufficient. If you have excessive myopia or dry eyes, SMILE Lasik will be the best option because it cuts the least amount of cornea.

Q. I need to go to work on Monday. When can I get back to my work after surgery?

A. SMILE Lasik allows you to get back to your regular life the next day.

Q. How can I follow up after the surgery? I’m a foreigner, and is it possible for me to get follow up when I go back to my country?

A. We have English speaking consulting service utilizing Kakaotalk and Facebook, along with 1:1 custom care. We can provide you with detailed references so that you could go back to your country and get appropriate cares. Also, you can communicate with us via Kakaotalk, Facebook, email, and the clinic webpage.

Q. Is there any potential side effects?

A. There was no major side effect case in the last 17 years.

The last comment is pretty impressive, right? So, I made up my mind to get SMILE Lasik!

First, when you get your eyes sterilized and lie down on the operating table, they move you to where the laser is, and here comes the surgery. I was so nervous throughout the surgery, but then, the director talked to me in English from time to time. He even told me some jokes! It really helped. When he moved his hands for a while, it felt like something popped out of my eyes, but there was zero pain except the feeling itself.

It’s very blurry right after the surgery, but after about 5 minutes, I could see much better than when I took off my glasses before the surgery. It felt like I could move around pretty well, so I just took subway home. Honestly, I feared that I’ll have at least a bit of pain, but I became kind of worried if the surgery was successful because I didn’t have pain at all, except that my eyes were a bit dry. But when I woke up after like three hours of sleep after I got home.. Wow! I just couldn’t believe that I got the surgery on that day, because I could see so well. And I went back to the clinic the next day and got my vision checked.

Isn’t this incredible that I got my vision back in just one day? Except that dryness, I didn’t even have any pain. And the next day, I could totally go to work. 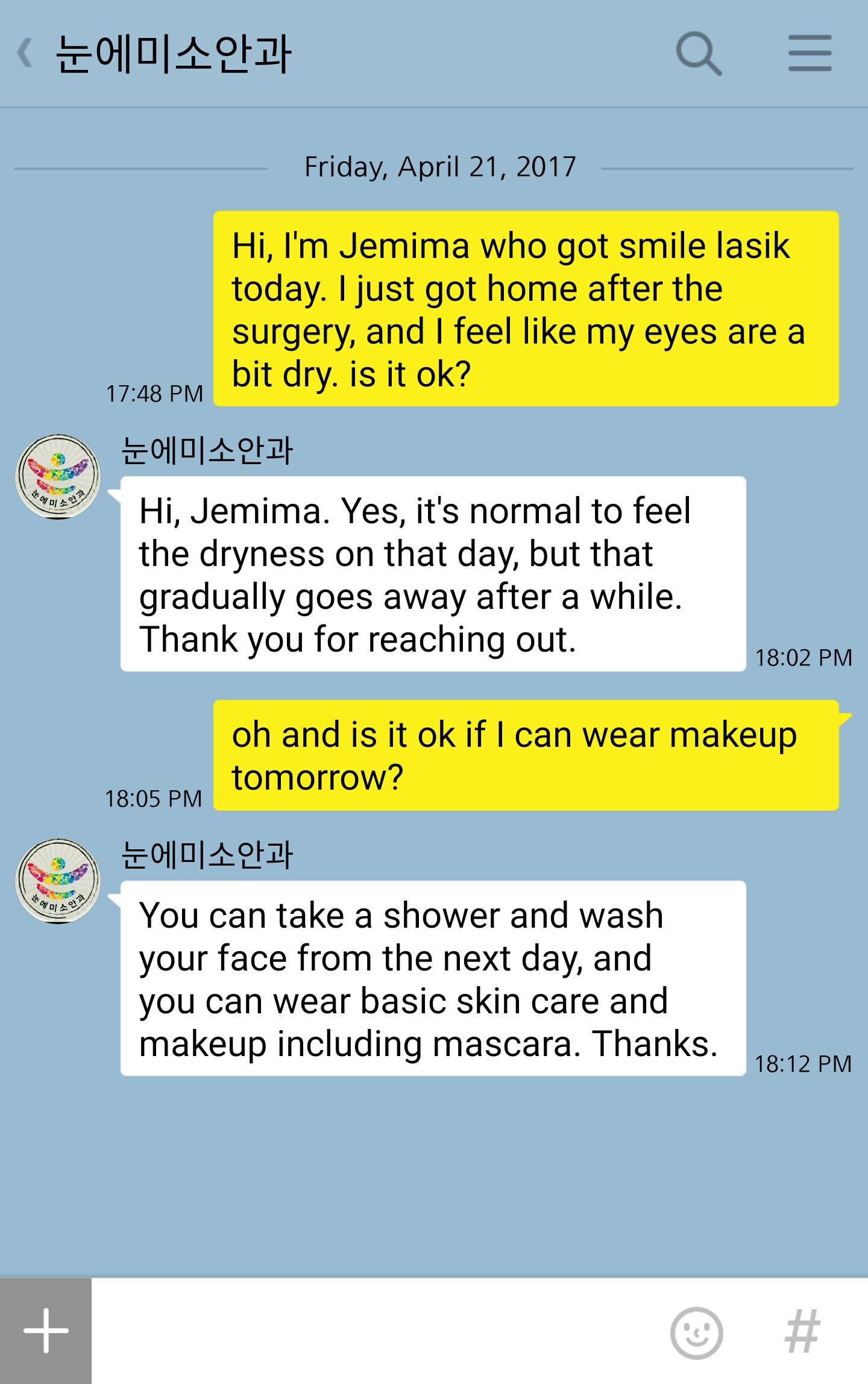 So I asked the clinic via Kakaotalk about my eyes being a bit dry after the surgery, and they said ‘It can happen on the first day, and it goes away as time passes’ right away. I also asked when I can start wearing makeup, and they told me that I can wear it from the next day. The thing I loved about this clinic is that they reply me so quickly, and in English. I felt like they will be really committed for follow-ups.

If there’s anyone who’s still hesitating to get Lasik or not, I feel like recommending him or her to get it as soon as possible. Especially so, if you’re in Korea. I don’t think it’s common to have this sort of opportunity to get affordable and safe Lasik.