For those of you wanting to expand your palette there is a new Thai Restaurant that recently opened in Nampo-Dong called Arun Thai.  We are a huge fan of Thai food and would highly recommend this restaurant. The owners are Korean and they speak English as well. The chefs are from Thailand and the food is amazing. This is by far the best Thai food in Busan. Try it! Nampo-Dong subway station exit 1 would be best.

This place is great! Well worth the trip to Nampo. Friendly, fluent-English speaking Korean owner, Thai chefs. We had chicken satay skewers, tom yum soup, pad thai, green curry, red curry, and a chicken/cashew veggie dish. ALL were great, though just a bit on the small side serving wise. Main dishes were 11-12k won, but lunch special M-F they're 8k (limited selection on lunch). Lattes/espresso/tea free for "dessert." Immaculate place, including the restroom. Please don't let this place be yet another casualty of foreign food in Busan..go, eat, and comment here!

Always over priced. Put a foreign country's name on the restaurant and it is worth 600% more than a Korean restaurant for some reason. Kimbop at a Korean palce is like 1500-at a restaurant that claims to be Vietnamese it is like 8000??? I have been here 9 years now and the only place I think is worthy of the extra costs is Namaste in Haeundae; and it is not because it is great Indian food-it is very good, of course, but rather, because the people there are insanely kind. The best service I have ever had in Korea by far. The staff-all of them, are amazing. Great job Namaste. They are opening a new restaurant in Marine City as well.

I haven't been to Namaste but I've heard good things.  But I've been here for 7 years and I can't tell you how many times I've paid 25,000-30,000 won for ONE PERSON'S meal at a Indian/Thai/Turkish/Middle Eastern restaurant in Korea and still come away hungry...  So I'm a bit cynical when people, as they always do, come onto Koreabridge singing the praises of some "new" foreign restaurant.  Eyebrows are raised.

Right there with you Tharp. Couldn't agree more.

Namaste is a little cheaper than Ganga and the atmosphere and service are way better. Just my opinion. It was the service that blew me away though. It was every bit like being back home; very proper/friendly-like they are working for tips but of course are not. I never endorse places on here for the reasons you have mentioned Tharp but I really do enjoy Namaste. It is in fact the only foreign owned, foreign food place that I really enjoy going to. Maybe the new Thai place is good but my eyes brows are raised as well. I would  have to walk in by accident to give any new place a try. Just been burnt by hope too many times.

I agree with both Paul and Tharp on the cost, but at the same time if you walk in to many 'foreign' restaurants in other Asian countries the prices are also high compared to the local food. In addition, the cost of eating out back home can also be astronomical, regardless of cuisine. I think the abundance of good, cheap Korean food has spoilt us all a little bit.

There is not a single dish in this restaurant that costs anywhere near 35,000.

I just happened to have plans to meet a friend in Nampo last week and caught this ad the night before. I rarely get to Nampo as I live in Jangsan so I suggested we give it a try. Actually met the posters of the "review" at the restaurant, a young couple living out near Saha. They mentioned to the owner that they'd placed the info on KB but I didnt get the sense that they were asked to do so. I volunteered that we found it (it's on the first black market roe just up from PIFF square) thanks to the couple. Was it worth it? Yea. The food was great. I may not eat as much as Tharp (LOL) but I left satisfied on a plate of cashew chicken and soup. I had to have the Thai Iced Tea, which was a complete rip-off as it is in any of these restaurants. The place is immaculate as stated and the owner is friendly- though the service may not be quite as good as Namaste. They messed up our order slightly, but what we received instead was also great so didn't make a fuss. Lunch is a good deal if you can get down there before 3pm.

Overall...I plan to go back with my wife and friends....another good excuse to get down to Nampo, even if only once in a while.

I went there for the second time today and it was great. Good prices, good size portions and fantastic taste.

Please tell me they have yellow curry.

Are there any more thai restaurants in this city besides Hello Thai and this one?

I don't remember if they had yellow curry on the menu but the best Thai food I had in Busan was at a hole-in-the-wall near Dukpo station exit#4 on Line#2.  Decent, AUTHENTIC Thai food at reasonable (mostly in 8-10k range) prices.  It's a tiny Thai grocery store/restaurant owned by a Korean guy married to a Thai lady.  Every time I went either the owner's wife or another Thai lady cooked.

There is no atmosphere to speak of (I repeat... it's a real hole-in-the-wall...) but if you are sick of koreanized or amercanized, overpriced thai food and just DYING for authentic Thai food at reasonable prices, then i would recommend this place.

As you exit the station (exit#4), look for an eyeglasses store in the corner.  The restaurant/grocery store's just a few doors down on the way to Dukpo elementary school...

Thanks for the scoop.
Found it on Google Maps here

There is a Thai restaurant over looking Song Jung beach.  It's expensive and the food quality is not really comensurate with the price but it's a beautiful restaurant with a full picture window over looking the beach.

My wife and I ate at Arun Thai last weekend and we're both quite satisified with the food (tom yum w/noodles and green curry) and overall dining experience. 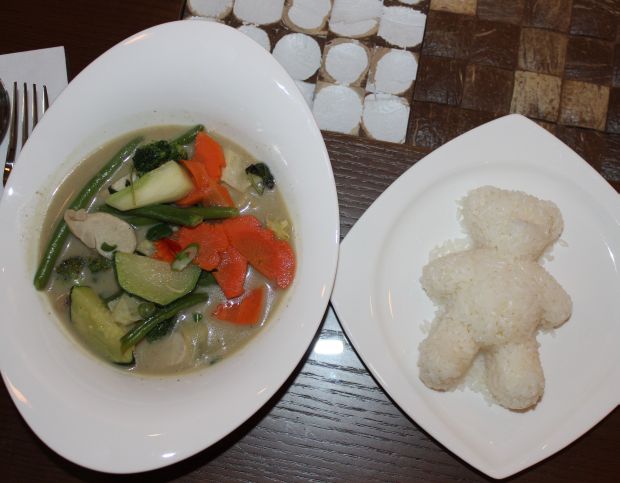 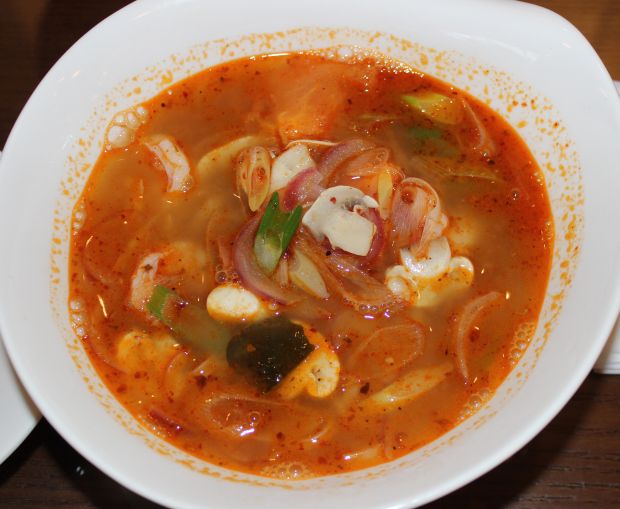 They now have a business listing on Koreabridge that include their entire menu
http://koreabridge.net/listing/arun-thai-restaurant

Just like so many things that are foreign, are also expensive back in the states or Canada.

Gosh wouldn't it be nice if Thai food was as cheep here as it is on the streets of Bankok?

It's really easy to miss because the owners are horrible at PR. Plus, the actual facilities have 3-4 tables for 4. It also moonlights as an Asian grocery store, though the fare is rather poor when compared to the goods in Sasang. That aside...

The food is amazing. I mean, amazing. Ok. I might be exaggerating. I've only tried two items on the menu since I'm rarely in the area. But, what I had was amazing.

I had the Tom Yong Goong which tasted (in Busan, remarkably) like Tom Yong Goong. The lemon grass was steaming from the bowl, the shrimps were portioned generuosly, I was in Thailand for a moment....

The head chef, who works in this tiny hobble of a kitchen, is Thai. Her husband is Korean. They seem to get along fine. The Korean husband made sure that the take-out I was taking out was cared for properly. He instructed me, Heat it up before you eat it. The flavor really comes out. Make sure you heat it.

I'm sure he was concerned about his shack's reputation, but the glimmer of pride in the cooking was

They also serve pho there, though "re-branded" as ...I forget. The name's in Thai, but the accompanying picture clarifies any doubt. It resembled the fare on Hanoi's streets, rather than Saigon. I'm not complaining.

Yeah, I forgot to mention- The menus have pictures. Of like all the items.