Fri, 10/12/2012 - 12:34 - thejessicasteele
Printer-friendly version
Tweet
If you've read my previous posts, you'll know that a few weeks ago I joined six other bloggers on special reward trip for the second round of the Korea Blog. Annabel and Ema of England, Gisela of Mexico, Maria, Dorothea, and I met in Seoul for a welcome dinner, and Asif caught up with us in beautiful Jeonju.

We spent the first day and night of the tour in Jeonju, but jjust we lunch we set off for Seonyou Island or Seonyou-do, a tiny island set in an archipelago of 65 islets off Korea's west coast. You may have heard of Seonyou-do before, but not realized it. Seonyou-do has also been romanized as "Sunyou" and "Seonyu", but for this blog I will be using the spelling that's listed on  tourist documents that I was given to avoid confusion. Seonyou-do is known for its tranquility and relaxed island lifestyle. It is a popular destination for cyclists and for those simply looking to "get away from it all." We were excited to get there, but not before a lunch break, of course.

We stopped for a seafood lunch in Gunsan's Raw Fish Town, a building housing a series of seafood restaurants and their vendors near the ferry terminal. We took an elevator up to the top floor and were led into a private room. We had drop-down seating on the floor, meaning that our legs could hang below us in a hollow space underneath the table. It is like sitting on a chair, but with no back, and it is very comfortable.

We had a great view, but most of the time we spent looking at the variety of strange seafood covering the table. The long, low tables were filled with side dishes and various delicacies from the sea, some of which we'd never seen before. We ate thinly sliced raw fish, mussels, clams, crab, and scallops. There were a few other specialties I couldn't identify, but I tasted them all because I wasn't sure I'd ever have the courage to order them on my own again! We even tried some sannakji, or live octopus. The octopus is chopped up and served in sesame oil, its tentacles still wriggling as they slide down your throat and it is certainly one of Korea's more adventurous delicacies. Needless to say, some of the bloggers stuck to soup.

We went straight to the ferry terminal after lunch. The ferry ride was an hour long, and we were followed by a pack of ambitious, snack-seeking seagulls for the majority of the trip. Once we arrived at the island we just had to take a short drive - on the back of a truck!

A bumpy, giggle-filled five minutes passed before we arrived at our pension, a series of small single-room houses set atop a hill overlooking a rock beach. We tumbled out, unpacked, and set off again for a tour of the island before dinner.


We took a winding walk, crossing a bridge to the tiny Janga Island. We stopped to admire the sunset, scenery, and antics of the local fishermen, who were either busy casting reels, playing jokgu, or simply taking a rest on the rocks. We drove back to eat a delicious barbecued dinner, sampling the local treat of small, crunchy seasoned crabs eaten still in their shell. We tossed the whole meal back with some jokes, stories from our home countries, and of course a beer or two. As the sun set, our little island family crawled down to the rocky beach where we took turns shooting off hand-held fireworks and being silly with sparklers. Still the night ended too quickly and soon we tottered off to bed. 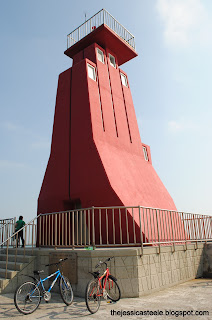 The next morning was a blur, as we rushed out to the waiting golf-style cart that was to show us around the island, while a few of the braver bloggers took bicycles instead (not me, in case you were wondering!). The pension owner was an able tour guide, navigating the bumpy and narrow roads with ease. We passed couples strolling along Seonyou-do's aptly-named "16-Kilometre Beach" and stopped for some photos with mural art. We drove to the "Praying Lighthouse," a quaint red, hand-shaped building peeking out on the sea, taking our last looks before we headed back to the pension for a Korean-style breakfast of soup, rice, and kimchi.

We then bid the pension-owners farewell and took one last bumpy truck-bed ride back to the ferry terminal.Just two hours later we arrived in Gunsan, ready for next adventure, but still not quite ready to tell the peace and quiet of Seonyou-do goodbye.

Jessica
Busan, South Korea
I'm a lucky young woman who has had the wonderful opportunity to live and travel in South Korea. My time here has taken me all over the country, and my blog follows those adventures. Enjoy!
You can also find my wiritng on The Korea Blog, the official blog of the government of Korea