Interested in learning the Korean language and want to learn all about telling time in Korean? You came to the right place!

In this lesson, we’ll give you the essential Korean vocabulary and Korean phrases you need so you’ll never miss another appointment. If you’d like to know how to say “time” in Korean, that’s a separate blog post. In this, you’ll learn how to tell the time in Korean.

Much of this article will use the Korean Hangeul (한글) so if you can’t read it yet you can reference the romanization. But we highly recommend you learn the Korean alphabet ASAP.

Let’s not waste any more time and start! 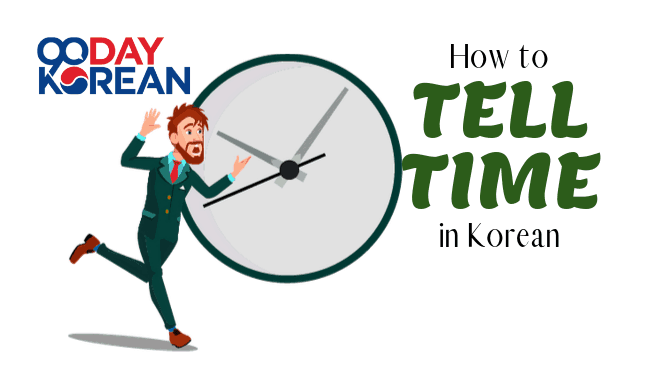 Getting started with numbers

In order to tell time in Korean, you need to know a bit about numbers in Korean. Korean has two number systems, and both are used when talking about time. We have a great blog post all about Korean numbers so study up on that if you’re interested.

For now, you can reference this chart:

We cover this more in-depth in our lesson on numbers (link to blog post above chart).

When talking about the hour, you use the word 시 (si) or 시간 (sigan). Remember you use a number from the 하나, 둘, 셋 (hana, dul, set) number system when using hours.

If you are talking about minutes then you use the word 분 (bun). You should use a number from the 일, 이, 삼 (il, i, sam) number system when using minutes.

Unlike hours, 분 (bun) is used both for telling time and indicating amount of time.

Now that we’ve covered our Korean numbers and know how to say hours (시 / si) and minutes (분 / bun) we can put them all together. A few things to know before diving further in though. Korean also has words for “half past” (ie. 4:30), which is 반 (ban).

Also, Korean words usually have spaces in between them. However, with hours and minutes in time, there’s no space. So while you may see 2 o’clock written as 두시 (dusi) and 두 시 (du si), the first one, 두시 (dusi), is the correct form.

So with that out of the way, we can start practicing! Do you know how you would say 2:33?

You can practice this a bit yourself, there’s a bit more we need to know about telling time in Korean before we can say we’ve mastered this though.

You may be aware of the two different ways of reading time, the 12hr clock (AM, PM) and the 24hr clock usually used by the military (HH:mm). Korea uses both these systems in daily life, but in different situations.

A vast majority of the time you’ll hear the 12hr clock used in spoken Korean. However, you may encounter the 24hr clock when you see the time written like in timetables at the airport or with tv schedules. In the 24hr form, it’s often the number+시.

Notice a difference here? In the 24hr form, it’s read using only the China system numbers. But while those in the Korean military or officials would read it as above, you’ll very rarely encounter it spoken this way by average Koreans.

In almost all other situations, even where it’s written in the 24hr form, people would still say it in the 12hr form. So most people would read the above time as 두시 삼십오분 (dusi samsipobun), and you should as well.

But how to disinguish between AM and PM? We’ll get to that now.

The Korean vocabulary for AM is 오전 (ojeon). You would use this to describe the morning hours.

The Korean vocabulary for PM is 오후 (ohu). You would use this to describe the afternoon and evening hours.

However, unlike in most places in the world, these are placed at the beginning of the time, instead of at the end.

You may on occasion see AM and PM put at the end of the time, but for the most part you’ll want to say that first when saying the time out loud. Also, if the situation makes it clear that it’s referring to morning or evening then you can omit saying it entirely.

If that’s all clear, let’s recap on our vocabulary and learn some Korean phrases you can start using in conversation!

Here we’ll give you some common Korean phrases at different levels of politeness so you can be ready every time.

You should use this Korean in a professional environment or with those who are older than you and you are not close with.

This style of speaking is used with friends, family, or others that you’re close with.

Now you'll never have to worry about losing track of time in Korean.

If you have any questions about the content of this lesson, feel free to contact us via email or leave a comment below. And check out our other posts all geared to help you learn Korean!