Sun, 10/03/2010 - 22:38 - citygirl
Printer-friendly version
Tweet
Farmboy has been climbing for years, and so has become rather good. I, on the other hand have just begun my journey into the world of abseiling, belaying, leading and rope tying and so am on the other end of the scale. It's been a bit of a rough start, as the first thing I had to do to prepare myself was to, ready for it?!, cut my nails! I know, shock horror! Go ahead, laugh...but I tell you, it was rather traumatizing, so much so that I had to allow myself a Friday afternoon treat at Leechard Pro Salon to get me through :)  ok, it wasn't that bad, but still, a difficult step that had to be done.

Anyway, enough about that. So where was I...umm yes, climbing. For those of you who have heard of this incredible sport will know all about how difficult it is, what a great workout it is, and of course, who Chris Sharma is.
For those who don't, heres a little video that explains all:

Basically, clumbing is like becoming Spiderman, without the web. Its an awesome feeling finishing a route (I speak from experience, as I managed to finish one just this last week...ok, it was a tiny one, but still...it was something!) and then to feel every muscle in your body shake as you reach that final point, right before 'absailing' back down to earth.

And climbing isn't just a 'Western' sport either, there are loads of Koreans here who do it and who are amazing at it! Luckily for us here in Daejeon,  there's a really great HUGE climbing wall right here at the World Cup Stadium that is open every day and is free to use.

So I leave you now with a few pics from our recent trip to the climbing wall: 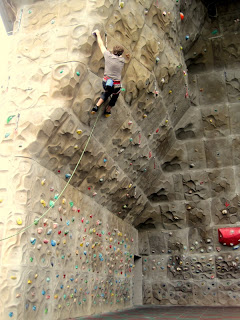 Our very cool American friend, Dan, up the wall 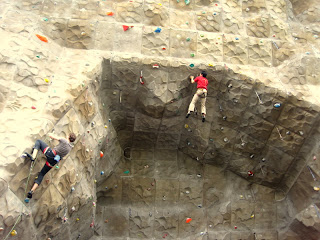 Dan again, and a Korean guy, both doing their thing 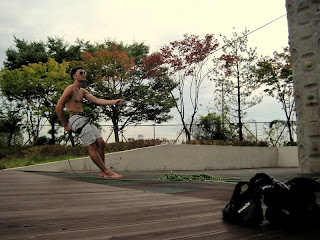 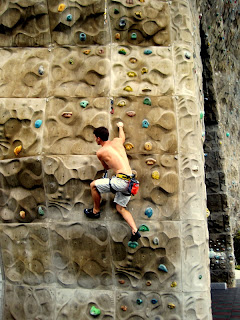 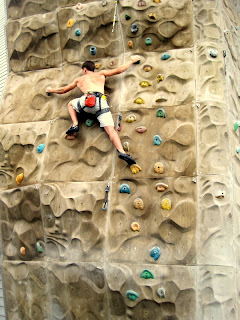 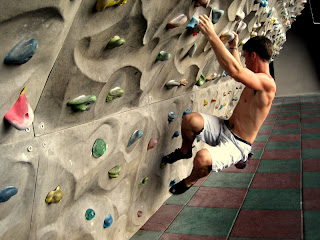 This is called traversing, and requires no rope or any help from anyone. This is the best way to get stronger to take on the vertical climbing.
Another reason I'm so keen to start climbing (apart from the killer toned upper body Im gonna have!) is the amount of accessories that go with it (I'm thinking pink chalk bag...make that pink chalk too pink rope, pink harness, pick...pink...pink....)
:)