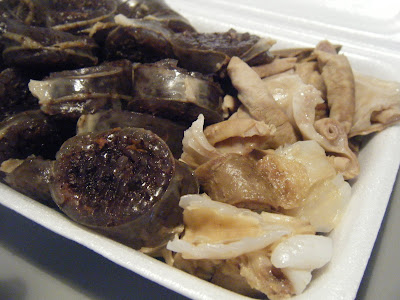 OK, I know this pun is both ripped off from the Simpsons and in slightly bad taste (it is, after all a U2 song) but given the subject matter, I really couldn’t title the post anything else.

Soondae is a Korean sausage consisting of pigs blood, barley and glass noodles stuffed into a casing of small intestine. It is a popular street food, and with a soondae van making regular appearances in the street by my school, one I just had to try.

I love blood sausage. A thick slice of black pudding nestled underneath a plump queen scallop or drenched in brown sauce next to my bacon and eggs is one of the things I miss most about home. I’m also quite partial to a few slices of Morcilla now and again and am open to a relationship with any other member of the blood sausage family that comes my way. As such, it was with some deal of excitement that I found myself striding towards the van on a muggy and wet Tuesday afternoon.

Once there negotiations began in the usual vein (name the cheapest price displayed, point and grin) but the vendor on this occasion seemed to take genuine pleasure from my obvious novice status. As he pulled each item out of a mammoth steam-belching pot he displayed it for my approval, before deftly slicing it up at speed and piling it thick and high on a polystyrene tray.

First came the soondae, a good-sized length of glistening black tubing looking a little like Morgan Spurlock’s intestines must have after eating McDonalds for 40 days straight. This was followed (to my surprise) by a few pieces of tripe, then some bits and pieces explained comprehensively as “small intestines.” The whole lot was sliced up and packed away with a sachet of pinkish salt and a tub of sauce for a mere 3000 won, making it by volume the best value food I have written about to date on this blog.

Naturally I tried the soondae first, finding it much more jelly-like and glutinous in texture than the dense, blood-cake character of the stuff I’m used too. This was undoubtedly due to the effect of the glass noodle filler, but also probably had something to do with the fact that the soondae was steamed as opposed to grilled or fried, leaving the intestinal casing almost as slippery as was intended for its original use. Despite this textural difference however, the soondae left a familiar and welcome iron-y taste in my mouth akin to the other blood sausages I’d tried elsewhere. When dipped in the salt and sauce, a spicy, watery ssamjung (bean paste) however, the effect was entirely unfamiliar and for me, a little at odds with the rest of the flavours.

Next came the extra bits. I’ve never been a committed nose-to-tailer so for me this was a little further away from charted territory. For it's part the tripe was pretty inoffensive; Mild and chewy it reminded me more of an oyster mushroom than anything which might come from the wilder and more unpalatable parts of an animals anatomy. Next to find themselves between my chopsticks however were some of the pieces that the vendor described as “small intestines.” These ranged from a wobbly jelly-like cut that was rather mild but pleasant in flavour, to a denser, richer cut that was much more flavourful. The later was much darker in colour and incredibly tasty, reminding me unmistakably (but perhaps erroneously) of roast beef. Not being a connoisseur on the finer points of intestines I am at pains to find out just exactly what this was, and have to date spent some time trawling the web in a fruitless search for an answer.

Although I found the huge portion a little too rich for one sitting, all in all it was a pretty good tray of animal parts. Soondae and its accompanying unidentifiables was a tasty and worthwhile diversion on a wet Tuesday and definitely something I will eat again.

As street food goes, not even a bad pun can eclipse that.