Tue, 06/11/2013 - 23:11 - The Kimchi Queen
Printer-friendly version
Tweet
WhoQ (pronounced 후크) is a new app being promoted on Ivan City. So far, most of the users look to be Koreans. I downloaded the app for a bit to look around, and I'm not very impressed. 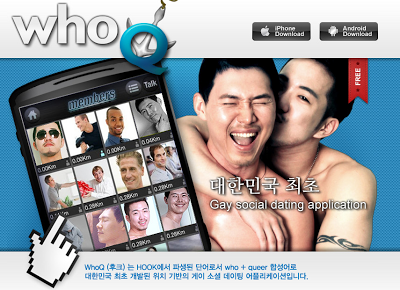 WhoQ is just another version of Grindr or JackD, but with lower resolution and less streamlined design. Don't know what Grindr is? Basically, it is a location based website that shows you nearby users so you can chat, exchange pics, and meet up. It looks like it is less patrolled for naughty pics, as there were a lot of naked pictures and 자지s on the main screen. So much so that I felt a bit guilty having the app and deleted it pretty quickly. I'm sure my boyfriend doesn't mind when I look at porn, but he wouldn't want me looking at naked bois on a gay app. This is definitely an app to find a hookup (hence the name...) It looks to have more users than Korean Grindr users, but less than Korean JackD users.

If you want to download the app, visit their website, search for 후크 in your app store, or take a picture of the QR Code below.