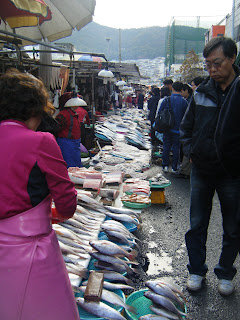 Years down the line a psychiatrist may well ask me to visualise my special place and when he does, I’ll probably be thinking of Jagalchi Fish Market. Centered around a huge sail-like building in Busan Port that evokes the Sydney Opera House, Jagalchi is billed as the largest fish market in Korea, and its easy to see why. Covering an area roughly 5000 square metres, a staggering amount of sealife passes through this place seven days a week, and I like nothing better than to wander the aisles gaping the ocean’s harvest in all its weirdness.

As you would expect, the market plays host to an abundance of fresh fish, crabs and crustaceans (much of it live) ranging from the familiar to the downright freakish; Monster King Crabs clamber over each other in expansive tanks waiting for the drop of the sellers net, while four-foot long Octopi stare back at you with their black dead eyes. I recently saw a bucket of turtles here, paddling around happily unaware of their surroundings and have even heard that whale meat is available, though have yet to see any myself. 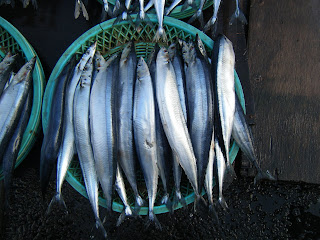 However, while its fun to watch, the best of Jagalchi is in the eating and in this respect a number of options are on offer. An as yet untried (but no less appealing) one is right inside the market itself, where anything you buy can be gutted, cleaned and cooked for a few chun and enjoyed in an upstairs eating section. In addition to this, dozens of restaurants, tents and eating places line the market fringes, all serving up the day’s catch at incredibly attractive prices.

I recently ducked into one of the latter on an overcast Saturday afternoon, enticed by the fish grilling outside and the busy trade within. After asking in bungled Korean for a bowl of jiggae (a spicy soup eaten with rice,) there soon arrived at my table a whole grilled fish (head eyes, fins and all) a bowl of jiggae and a bowl of rice. The fish turned out to be a happy accident, an abundance of flaky white flesh under crispy golden skin coming apart easily underneath my chopsticks. Delicious on its own, the bowl of dipping soy sauce that arrived with the banchan (side dishes) added an extra, previously untried dimension. 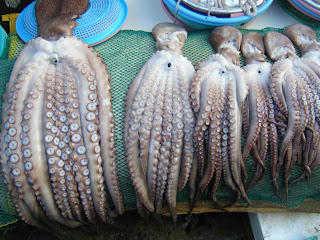 For its part the jiggae held its own; the rich spicy broth complemented with green onion, beansprouts and bits and pieces of sea creatures I don’t know the English for let alone the Korean. The biggest surprise however was the chocolate coloured tofu bobbing around amongst the seafood. This chunky, textured addition was nothing like the slimy, watery meat substitute defended so vigourously by vegetarians in the west, instead adding body and substance to the bowl.

After paying up (the whole thing came to less than £3) and leaving with a hearty “chal mokessayo!” I returned to the madness in search of the night’s dinner (a pair of Mud Crabs as it turned out) and gape a little more.

This is what Saturday afternoons were made for.