Mountains and the Korean Mind (Seoraksan)

Korea, the land of the Morning Calm, is also known as the land of the mountains. Approximately 70% of the country is covered by the graceful bones of Mother Earth, shaping the minds and the history of the Korean people unlike any natural feature found on the peninsula. Mountains feature prominently in the country’s arts, culture and religion, some even go as far as to say that it was the Korean mountains that helped defeat the first Japanese invasion under Toyotomi Hideyoshi in the Imiji Wars (1592-1598), with a little help from the Chinese and local hero, the Great Admiral Yi of course.

The omnipresence of mountains in the Korean cultural psyche is enforced by the believe that powerful spirits, both San-shin (산신) and Daoist Immortals alike, both of which find reverence in Korea’s Confucian, Buddhist and Shaman schools of thoughts, inhabit and protect mountains and the surrounding areas . No wonder that many of the most sacred sites of Korea are found on rough mountain tops or on the latters’ slopes. Neo-Confucian ideologies, ubiquitous during the Choseon Dynasty and always suspicious of the Buddhists’ leanings towards hermitage and reclusiveness, also played a large part in driving Korean Buddhism and Shamanism out of the city and into the rural areas, and there, particularly to the Korean mountains.

Buddhism had always had strong support in the farming population of the olden days, with its centres banished from the political capital of Choseon it was only natural that its monasteries and temples (신전, or Shinjoen in Korean) would take root on and around mountains. This allowed monks to withdraw themselves from society at large, allowing them to focus on strengthening their theological understanding of Buddhist teachings whilst providing morale and spiritual support to the rural people instead. The mountainous surrounding also allowed the Buddhist faith to draw upon nature reverence based in Korea’s native Shamanic tradition, Mugyo, or simply Mu, synergizing much of Buddhist iconography with existing veneration of mountains and their mighty spirits. 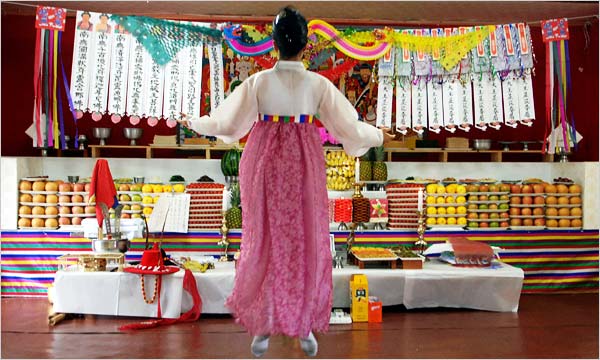 Naturally, some mountains played a larger role in the people’s psyche than others: First and foremost amongst these is Baekdu Mountain (백두산), now on the Borders of North Korea and China and subject to fervent territorial and historic disputes and said to be the birthplace of the Korean people. The other two  spirited mountains go by the names of Jirisan (지리산) in the south of the Peninsula and Hallasan (한라산) on Jejudo, both steeped deeply in history, religion and mythology of the Korean people and their national psyche.

Seoraksan is not part of the Order of the ‘Three Esteemed Spirited Mountains’ but has quickly become one of the most sought after localities for Korean’s favourite past time,second only to drinking: HIKING. Renowned for its serene beauty and majestic scenery Koreans and foreigners alike visit these beautiful mountains near the coastal city Sokcho in droves. Expect thousands over thousands of hikers during the short Korean autumn, which sees the  mountain’s fauna explode one last time in fiery display of life and colors before the cold and deep winter slumber.

Korean’s are extremely fond of Seoraksan as they are in general of the natural beauty of the peninsula, and rightly so. The place is soaked with folklore and history and has a stunning landscape to boost: One famous story speaks of  Ulsanbawi (울산바위), a beautiful rock formation that is said to have originated from the city of Ulsan in the south east of Korea. As Kumgangsan(금강산), a famous mountain rage just 50km north of Sokcho, now hidden behind the barb-wired and heavily mined boarder of the Democractic Repulic of Korea, was built, Ulsanbawi marched up north asto represent its city at this auspicious and grand event. Unfortunately Ulsanbawi arrived too late and found no more room for it to settle down. Ashamed and disheartened the rocky creature slowly trudged back to the south. One evening the rock went to sleep in the Seorak area and clearly never managed to leave from there ever again.

We arrived at Seoraksan via a coach to Sokcho from Seoul’s Express Bus Terminal (고속터미널역) on Subway Line 3 (3 호선). When arriving at the subway station you need to leave the new building and cross the parking area into the old Bus Terminal building. One way tickets cost approximately 19,000 Won (about £11) and the journey takes about 2:45 mins with a ONE 15 minutes break half-way through the trip. Pray that you have a nice driver who will make an unplanned stop for the weak-bladdered travelers amongst you.

Once in Sokcho, you can find a small tourist information office opposite Angel-In-Us Cafe where you can deck yourself in with maps and guides to Seoraksan. Cross the road to find the bus stop for buses going into the National Park. Fares are only 1500 Won and the journey time approximately 15 minutes.  The pace of the sudden change of scenery from coastal Sokcho, to rise fields over to bald-headed mountains is quite astounding and adds to the scenic beauty of the area.

Now here comes the difficult part: Where do you go from here? Seoraksan National Park is huge and you could easily wander around here for 4-5 days and still not see all its faunic beauty, its temples, rivers, waterfalls and lakes. Given that we only had about 5 hours to spend before heading back we opted for the easy, fast-lane tourist route via the cable car, much to my regret and the happiness of my lazy friends.

From the main entrance we went straight to the cable car to Gwongeumseong Fortress which will take you all the way to the top of the 1,200 meter high Dol mountain where the generals Gwon and Kim are said to have build the Gwon-Kim Castle. Once off the cable car make a quick run up the mountains to avoid having to track up the approximately 200 meters with the rest of the cable car crowd and enjoy the magnificent landscape. It is highly recommended to tackle the climb all the way to the top of the mountain for breathtaking birds eye view of the surrounding area which includes Ulsanbawi, Sinheungsa , as well as Sokcho and the much disputed East Sea.

The misty, tree covered, sometimes barren rocks of the National park make for some of the most picturesque settings you can encounter in Korea. Watching the mist and clouds wander through the mountains, hiding both tree and rock behind a frail white veil before being broken by wind and sun are hard to beat in their sublime and serene beauty. In strange ways, on top of that rocky mountain I felt connected to the mystics, shamans and hermits of the past; I felt an instant understanding of their appreciation of the meditative splendour of the mountains’, the sensually overwhelming  power of nature’s intricate play of ever shifting texture, shadow and light that has inspired countless Korean artists, holy men and women and lay people alike.

If it wasn’t for the armies of tourists, these mountains could yet again become a religious recluse, a reservoir for contemplation that they were meant to be in days long past. Remnants of that religious history are found in the major temples on the park’s ground: Sinheungsa (신흥사) and Baekdamsa (백담사). There are couple of other shrines and temples, one of which is near the cable car station on top of Dol Mountain. Follow the Buddhist chanting, which unfortunately only comes out of a stereo system and you will find a small temple watched over by a lovely monk.

Sinheungsa is easy to find: from the park entrance keep walking straight on and you will eventually pass its mighty gates to be greeted by the magnificent and sublime Tongil Daebul (통일 대불), a 15 meter high and 108 ton heavy guilt bronze statue of the great teacher Buddha.

It is not only the beautiful craftsmanship that makes this statue noteworthy; built solely from donations of the faithful the Buddha symbolises the Korean people’s wish for reunification. It is only apt that the statue contains 3 saris, cremated remains of Shakyamuni Buddha, donated by the Myanmar Government, and a copy of the Tripitaka.

The temple grounds themselves make for a lovely stroll – take your time to explore its little winding paths and open your eyes to the magnificent details of traditional Korean decorative colors, called Dancheong (단청), perfectly complementing the fiery foliage of the Korean autumn.

Maharaj Varatharajah, is a German with Sri Lankan roots, now living and working in London in Digital Strategy at a WPP agency.

He firmly believes that the best way to learn about a new culture is through its cuisine and he tries to broaden the horizon of his taste buds at every given opportunity – and there are plenty.

As a natural Asiaphile he has fallen head over heels for Korea and tries to learn as much as possible about this beautiful country, its people and their fascinating history and love to connect to people who share the same obsession and passion about Korea.