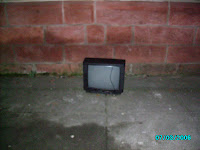 The hangover has barely faded and Masterchef 2008 is already breathing its garlicky breath down our necks. Tearing a hole straight through eight weeks of BBC 2’s 8:30 weeknight slot (barring Fridays) Masterchef Goes Large 2008 is once again serving up generous portions of tears, triumph, (and a lot of the same) over the coming weeks and months. Under the critical gaze of large faced double act x and y, a whole battalion of food weirdo’s will be sweating it out in the Masterchef kitchen, each vying for that prized place in the final and the chance to “change their lives forever” with a guaranteed job in a “top kitchen” (and if they’re really lucky a shot co-hosting the Wild Gourmets or some similar drivel.)

At first glance a number of things jar in the Masterchef goes large format. For a start, while some of the contestants are old enough and far enough into their (mis)chosen careers to really benefit from the fast track to job in cooking, the increasingly younger make-up of the contestants make a less convincing case for the whole “one chance to realise their dreams” foundation on which the show trades. If they want to cook so badly, one asks oneself, why not just get a job in a kitchen? It could be that I’m missing the point entirely, or that getting what you want without working for it is actually looks good on a CV these days, but I don’t tune in to Masterchef now without my sceptic gun cocked and with the safety off.

It’s also painfully repetitive, with much of the show looking like it’s been directed by a computer programme. Each day the same lines are trotted out by the voiceover. “Accountant Robert is risking it all with…” describes anything technical or offbeat, while “but will that be enough to impress the judges?” is generally reserved for more conventional efforts. The emotional state of the contestants is similarly portrayed with a few easily recognisable rules. Stress and pressure are denoted by the Prodigy, while Keane usually kick in at the end accompanied by a group hug to portray the bond forged by the group and good will towards the emotional winner. Personally I’d want to kick him or her in the shins but then again I am solitary, poor, nasty, brutish, and short.

Yet despite these foibles, Masterchef draws me back, if intermittently, again and again. Chief among the reasons for this is the quality and thoughtfulness of the cooking on show. Most of the contestants display a genuine flair and passion for what they are doing, and the often inventive, risky and instinctual combinations (particularly in the first round) show approaches to food I might not usually consider. The earnestness of the contestants is another plus; many contestants look like their very life depends on the taster’s reaction to their laboriously crafted creations, and I can only admire the guts it must take to put themselves out there through their food. For these reasons, last years contest threw up some interesting finalists and made for a good season finish. This year some of those contestants have been invited back to undergo life-threatening 16 hour shifts in some top kitchens later in the series, so it’ll be interesting to see how this kink in the format works out.

Exploring a more sobering theme this week BBC 2 also kicked off the first in (another) series of films about the Iraq War with the badly titled The Boys of Baghdad High. This fly on the wall documentary follows the lives of four Iraqi friends as they try to maintain a normal life on the increasingly blood soaked streets of the Iraqi capital. Having been provided with video cameras the boys then recorded the various aspects of their day to day lives, be it singing along to a Britney Spears song or running the daily gauntlet to school and back. For dramatic effect, the friends were all from different religious backgrounds (though only two of them appeared to hang out with each other) giving a further twist to the tale.

Although The Boys of Baghdad High was rich in material and made for a unique on the ground insight of what is going on in Baghdad, the programme was badly let down by the editing. For some reason the four boy’s voices were dubbed into English (in wildly unfitting accents) while everyone elses were subtitled, affecting the fluidity of some of the scenes. In addition, the film was cut somewhat haphazardly, and seemed to be trying to manipulate the footage to show the boys everday life, i.e. hanging out or being nagged by their mothers, jarring with the stark realities of the war. This in itself isn’t necessarily bad, but instead of providing us with a stark contrast as the programme makers must have intended, it seemed to enforce a misplaced light-heartedness to some scenes when the truth was much grimmer. Although it did throw up the line “If Chemical Ali really wanted to destroy the north, he should have fired a rocket with Mohammed’s socks in it.”

There were some poignant moments, such as when two of the boys parted company as one relocated to the Kurdish north to escape the violence, as well as some truly terrifying footage of explosions and firefights, but somewhere in putting it all together the integrity was lost, and as such I doubt The Boys of Baghdad winning any awards for film making.