A girl was worried about her skin getting old and wrinkled. This girl was the type of person that would try pretty much every method there is to make your skin better. She heard from someone that if you put sesame seeds in the water of your bath, it will be good for your skin. The girl tried this method right away. But after a few hours in the bathtub she would still not come out of the bathroom. She'd only say "just a moment" when someone tried to enter. Her mother grew suspicious and forced open the bathroom door which was locked. Then she saw that an innumerable amount of sesame seeds had attached themselves between every small wrinkle and every pore and had started to grow roots. Her daughter seemed like she had lost her mind and was frantically trying to remove the seeds with a toothpick.

This urban legend is somewhat similar to the Cockroach Facial story from a few days ago or to "Lotus Girls". There is also another version with ants. I guess this shows you just how obsessed Korean girls are about their skin ;p. This story was reused in a recent horror movie called 전설의 고향 (The Hometown of Legends), here are some pictures: 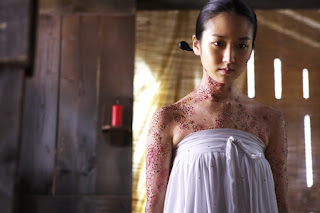 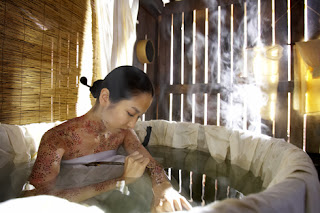 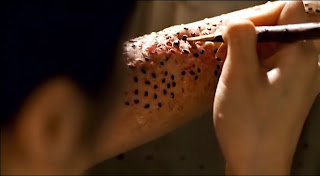 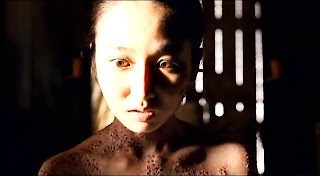 Oysters That Grow On Your Lap (무릎굴)

One day a guy was walking around at the beach when he slipped and fell on a big rock. He hurt his knee pretty bad and there was a deep cut in his flesh. He washed the wound quickly and put a bandage over it. But after a while the wound started to itch really bad. He was afraid that the wound would get worse if he removed the bandage, so he just endured the pain. A few days later, he finally removes the bandage. Oysters had laid eggs on the rock on which he fell and the eggs had ended up on his skin when he fell. Covered by the bandage and fed by his blood, the eggs had hatched and thrived and his knee was know completely covered with oysters.

A woman gave birth to a baby but, unlike her, the baby did not have double-edged eyelids (i.e. the baby looked Asian). She felt disappointed, and because she felt the baby would be prettier that way, she turned the single eyelids into double-edged ones using nothing but tape. After a while she tried to remove the tape, but she teared off the baby's eyelids along with the tape.