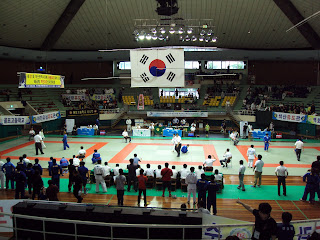 I had the opportunity to watch an incredible judo tournament held in Busan, South Korea, where I currently live and teach English.  The event was held in the Gudeok Sports Arena and attracted well over 300 competitors.  The tournament did not include Busan’s top tier players, or “professionals” as they call them, but had some fantastic talent nonetheless.  It was clear to me the moment I got to the arena that this would be a different experience for me altogether.  As I came into the building there were no concession stands, no t-shirts for sale, noone collecting money – I literally walked in off the street through the open doors and took a seat.  Korea clearly goes about their judo with a no frills approach.  This is judo land, and I could see why.
From the get go the action was fast and furious.  I could see from my own experience in judo that there were some serious competitors involved this day. 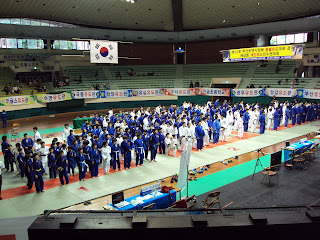 One of the best things about the tournament was the energy and involvement of the spectators.  All throughout the tournament, the rival teams were shouting what seemed like battle cries.  Like a military cadence, one member would lead the verse, then the team would sound off.  It really showed the essence of the fighting spirit of judo. 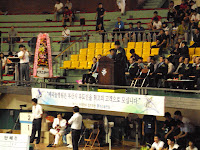 Midway through the tournament was a formal ceremony with special guests, judo dignitaries, and other ceremonious activities that gave the event a very formal appeal.  It actually felt a lot like a graduation ceremony.
Also, my own master instructor did a kata demonstration of a formal technique sequence in judo called, Nage No Kata.  In Korea, judo is an institution and they don’t take the sport lightly.  In comparison, South Korea has won nearly as many gold medals in World Championship and Olympic Games events as the United States total medal count.
Nearly all matches ended in an ippon – or full point ending the match.  I watched nearly 6 hours of matches and counted only 4 that went to the judges.  That’s a testament to Korea’s focus on technique and ending a match decisively.  In fact, I saw no needless wrestling or wasted movements – even with the novices.  In some cases, it seemed like they were performing a demo as the execution of the techniques were so exact and clean. 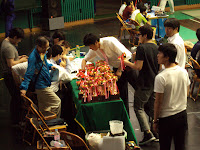 This was a great day.  An eye opening experience.  Who knows, maybe one day I’ll shake off the dust and see how I fare against some of Busan’s Best.