An Interview with Joey Rositano, Photographer of Jeju Shamanism

Joey Rositano is not your ordinary expat. Hailing from Nashville, the Tennessee native has called Jeju-do, an island off the southern coast of South Korea, home for the past nine years.

But it's not just the island's tropical charms and beautiful beaches that keep him there. Rather, his interests in shamanism, a religion that has all but become extinct in recent years, as well as his desire to protect it and share its stories with the world, have driven him to produce a documentary and publish a book of photographs that document his experiences on the island.
Spirits: the Photo Book, which will feature 220 full color images that highlight Jeju shrines, as well as shamanic religious practices that are often carried out by its elderly population, including rare ceremonies performed by haenyeo, the island's famed women divers, to ensure safety while performing their treacherous work. 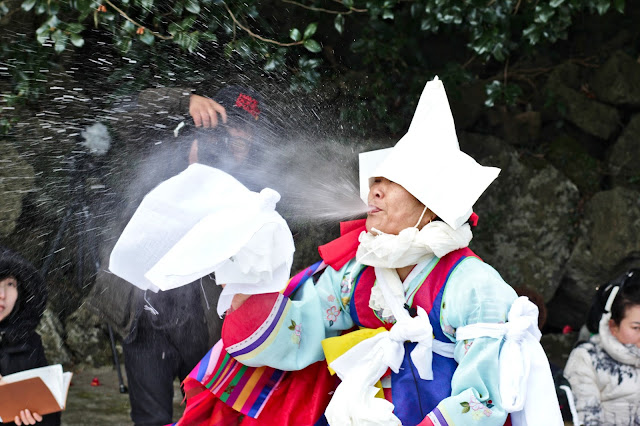 The book is set to be released in mid-June and will be available for purchase in Jeju, as well as on Joey's blog and Facebook page.
Despite his busy schedule preparing for his book launch, Joey took the time to chat with me for an exclusive Seoul Searching interview to discuss his experiences in Jeju, his efforts to preserve shamanism and the future of the island religion.
What is it that fascinates you most about shamanism?
Shamanism is so fascinating, especially an intact system like Jeju’s muism. After immersing myself in the practice and exploring a number of shamanic communities here, I waver between being fascinated by the familiar and the unfamiliar.
There is so much in shamanism that mirrors the world’s major religions. There are points at ceremonies where I feel I am at a religious gathering back home; the emotions, the sense of community is really familiar. Then there are times when it is so clear that the elderly practitioners of muism view the world very differently than I do. It’s really fascinating that people with intensely different world-views live beside each other on Jeju Island, the elderly and the younger generations. 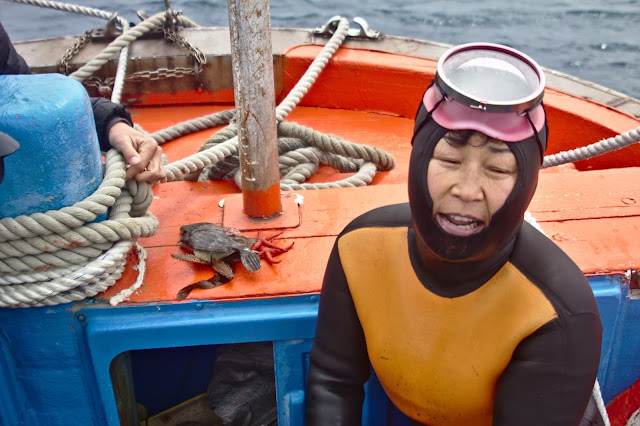 How common is shamanism in Jeju?
It’s in every village but to varying degrees. This is a difficult question to answer because we would have to first agree on what shamanism is. I’ll try to answer simply though. As far as fully functioning systems with a living village shaman and regular shrine rites, perhaps around 25-30 villages out of some several hundred villages practice shamanism in its original form. In villages where the line of traditional village shamans has broken, people still worship at shrines and contract shamans from outside to perform ceremonies.
Elements of shamanism can be found everywhere in Jeju, in Buddhism and even in Confucian rites. For example, people in Jeju celebrate the Mountain God and Sea God ceremonies with Buddhist monks and at each family’s memorial services a table is set for the Door God who is one of the central deities in Jeju muism’s cosmology. Shamanic funerary rites are often performed in houses even if the younger residents aren’t practitioners of shamanism. 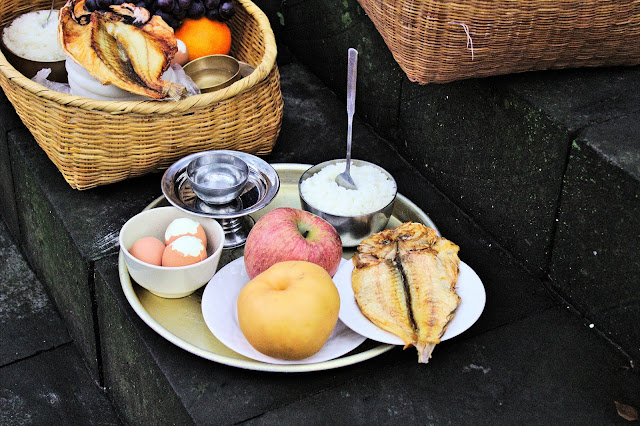 How is shamanism and the religion's shrines in Jeju different than shamanism on the mainland?
It’s really different, though it was more similar in the past. In Jeju, the village shaman, called shimbang in Jeju-eo, a variation of Korean that is only orally spoken on Jeju, is the religious leader of each village. The shimbang is responsible for leading ceremonies at shrines and performing ceremonies in village residents’ homes. These ceremonies are performed to call on the gods to bless a new home, to heal the sick or to ensure the souls of the dead are able to reach the afterlife.
These are just a few examples. The position of shimbang is generally inherited through family lines and the community is organized around this person who has the unique ability to recite the island and village myths. This is no small feat. We’re talking about up to thirty hours or more of recitation in some cases. I understand that this type of village shamanism is more common in Jeju still than the mainland.
Also, the music is quite different as are the deities. The female deities are more prominent in Jeju. Of course, all these practices take place in Jeju’s language. Some of the gods overlap with gods in the mainland but they play a different role in Jeju’s cosmology.
In the 1980s, the Korean government attempted to eradicate shamanism in an effort to shed its reputation as a superstitious, "backward" nation. Even today, it is often viewed by mainlanders in a negative light. Are these sentiments shared by those in Jeju? How is the religion perceived by the general public there?
The Anti-superstition Movement had a great effect on shamanism in Jeju. Many village shamans were coerced to give up their practice during that period. Shrines were also destroyed. Yet, the people of Jeju resisted and fought back. That is certainly a theme in the story of shamanism in Jeju.
Outsiders have tried over the centuries to destroy the practice but the fact is the people of Jeju always pick up the pieces and rebuild their shrines. That said, the movement did a lot of damage. It successfully erased shamanism from the minds of the younger generations.
I am constantly educating younger people in the city about muism’s myths and shamanic practice. I’m not trying to be arrogant when I do this. I am always shocked to find out how little they know. So I give presentations at high schools and talk to whoever I can. Many younger people from outlying villages know about muism though, as they grew up around their grandparents. Many of them have had encounters with the village shamans when they were young. 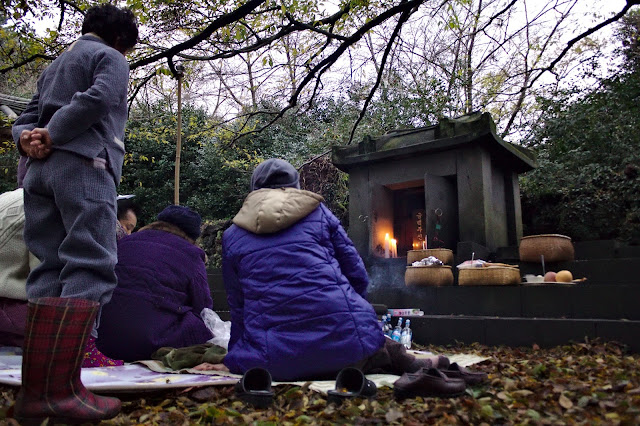 What efforts are being made, if any, to protect the shrines?
There are around 400 shrines. A handful have been protected as cultural assets and individual villages have been making efforts to protect their shrines as well. But the overwhelming majority aren’t protected and many are near to being entirely forgotten.
There are people working on this problem in Jeju and there is a sense that it is an eminent problem as so much development is occurring. Recently two shrines have been damaged and both are seriously threatened. I’ve been working with a local group on this issue and have played a prominent role in the case of Sulsaemit shrine, which was desecrated last year. I want to work on an initiative to protect all of Jeju’s shrines.
You mentioned that each shrine is associated with a myth. Which is the most interesting you've heard?
I really like the myth of Miss Hyun’s shrine on the southeastern side of the island. Miss Hyun, unlike many of Jeju’s deities, is a young goddess, not a grandmother goddess. She was an actual person, a village shaman, who lived several hundred years ago. It is said that she died of grief after discovering her brother’s corpse on the nearby beach. He had returned to Jeju from the mainland with a ceremonial dress for her but then shipwrecked. Today, villagers still hang ceremonial dresses for Miss Hyun in a tree in her shrine. You can see these dresses in some of the photos I included from the book. 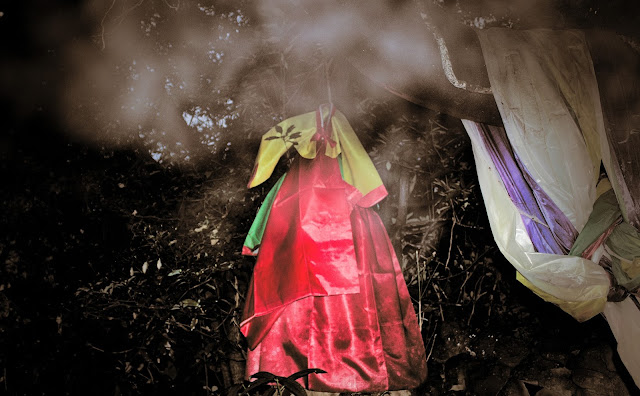 Throughout your research on shamanism, for both your book and your documentary, what is one event or discovery that sticks out the most?
There are so many. It seems like every time I go out I learn something new. I particularly like hearing people’s personal stories, stories of miracles or stories of times when people had no one to turn to except the shrine gods.
I have enjoyed getting to know one elderly shaman called ‘Oh Halmang’ (Grandma Oh) in her village. Over three days we recorded about fifteen hours of Jeju’s myths. She’s a very comical woman and often would clarify the plots of the myths by comparing them to situations in Korean dramas. Also, hearing stories from the period of the Jeju Uprising, also known as the April 3rd massacre of 1948, has been very sobering. 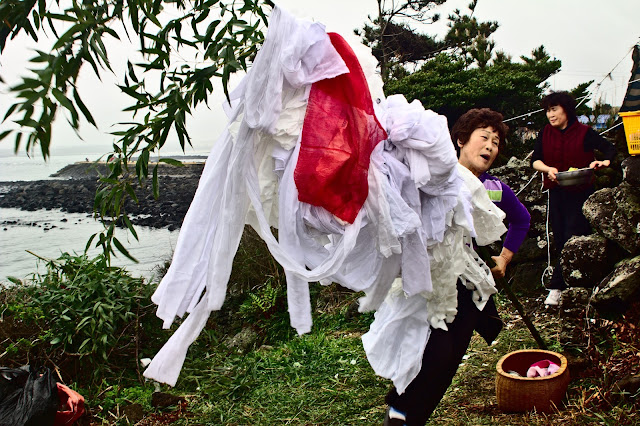 In your opinion, what is the future of shamanism in Jeju?
Many believe that Jeju’s native shamanism is on its last legs. Many village shamans agree with this view. Ten or fifteen years is generally a number given. Yet, there is a movement building in Jeju. The youth are starting to embrace the mythology and learn a little bit more about the religion. Shamanism is being incorporated into many art forms. Time will tell if this is only a fad.
It isn’t unheard of for a community to rebuild its traditional religion. Estonia is a great example of a place where shamanic shrines and practices were essentially entirely reinstated. It will be difficult though. The training that village shamans go through is very extensive and takes great commitment. There are some new shamans in training now.
Anything else?
On Jeju, there is a living example of Eurasian shamanism that is extremely valuable. By examining it, we can get a sense of what it was like to witness the pre-Christian era in places such as Europe as well. I want to bring people’s attention to this and show them that shamanism is not what they think it is. As far as protecting the shrines, it’s time to make some noise.
Interview by Mimsie Ladner of Seoul Searching. Images courtesy of Joey Rositano.