An Impromptu Hike on Dobongsan

Thu, 05/09/2013 - 15:30 - SeoulSearching
Printer-friendly version
Tweet
"Serendipity.  Look for something, find something else, and realize that what you've found is more suited to your needs than what you thought you were looking for." - Lawrence Block

Earlier this week, I felt the need to get out my apartment and take advantage of the beautiful weather.  A friend had told me about a place called Herb Garden in Gyeonggi Province and without doing much research, I made it my destination for the day.

After a late start- the snooze button and I are far too well acquainted these days- I hopped the wrong train.  Twice.  After an hour of transportation mishaps on the ever-complicated Line 1, I had reached northern Seoul and realized that by the time I would reach Herb Island, I'd only have a couple hours to enjoy it before having to return to the city.  So, I threw up my hands, stepped off the train, got my bearings, and exited the station.  I was in store for a day of serendipitous Seoul Searching.

Standing outside Dobongsan Station, I looked around, not sure of where to go.  Although I had heard of the mountain of the same name as the station, I had never been to the area.  Suddenly, a flock of friendly elderly hikers, easily recognizable by their fluorescent trekking attire, emerged from the station.  On a hunch, I followed them past groups of feisty grandfathers playing janggi (Korean chess) and into the biggest concentration of hiking supply stores I've ever seen in my life.  Vendors in portable kiosks sold roasted corn, kimbap, and makgeolli, all essentials for a good hike. 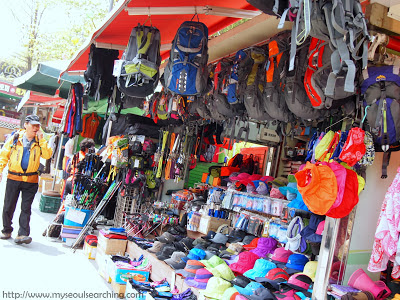 A hiker checks out the wares of a hiking supply vendor on the route to Dobongsan.

Just before I reached the entrance of Bukhansan National Park, I stumbled upon a cluster of sundubu (soft tofu) restaurants.  I later found out that "Sundubu Alley", as this area is often referred to, is a hotspot for foodies, as all of the restaurants in this location make their own tofu daily, ensuring that the dishes served are distinctively fresh.

I ordered a bowl of sundubu jiggae (soft tofu stew) at Dubu Cheonji (두부천지), an unassuming hiker's hangout with a nice patio and friendly servers .  The dish arrived piping hot with generous portions of dubu and shellfish.  The tofu was as soft as silk and very tasty, if not extremely spicy, proving the area's reputation for good food to be true. 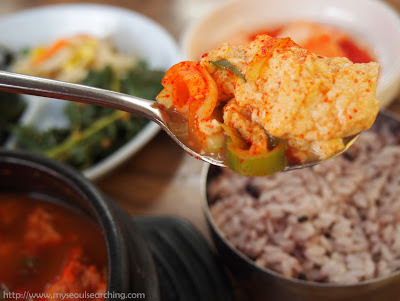 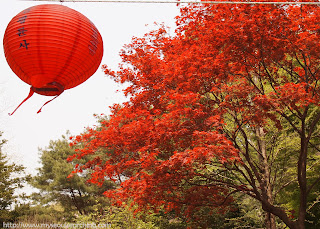 With a full stomach, I entered the park and didn't bother looking at any maps.  Instead, I walked along the paths of colorful lanterns that hung in celebration for Buddha's Birthday into a number of temples that dotted the paths of Dobongsan.  The monks welcomed me with smiles and motioned for me to look around.

Just as I was taking a moment to snap some photos, an air raid siren sounded from the distance.  Although I had heard plenty of these practice sirens before, I wondered if, considering the recent tensions with the North, this might be the real thing.  I quickly shrugged it off, figuring that if it were, I was in a Buddhist temple.  That had to count for something in the afterlife. 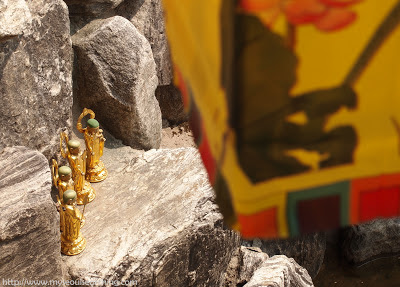 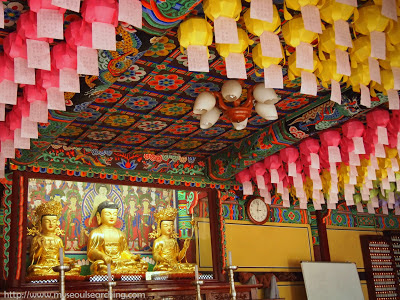 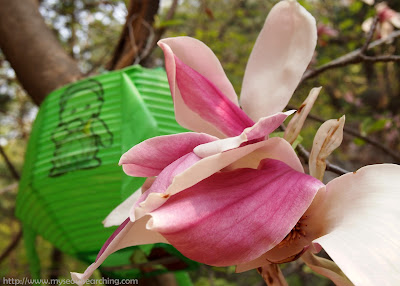 Lanterns and flowers in full bloom added a great deal of color to the otherwise verdant scenery.

Considering my visit to Dobongsan was a spontaneous one, I was unprepared for any real hiking; I was without proper shoes, clothing, and the obligatory sparkly sunvisor.  Opting not to head up to the peaks, I continued on through flatter terrain, admiring the occasional waterfall and thankful that there were still some cherry blossoms in bloom.  There was even a gentleman playing the saxophone on one of the walking paths, treating my fellow hikers and me to some joyful melodies while we filled up our water bottles with refreshing spring water. I regretted not bringing bug spray, as the gnats were out in full force, despite it being early May. 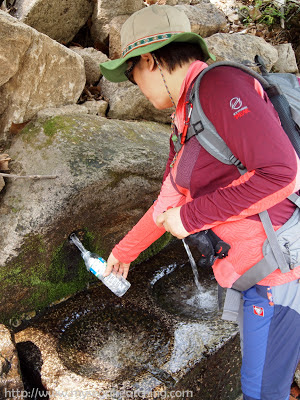 Along the paths of Dobongsan are taps where you can fill your water bottle with spring water.

I parked it on a boulder under a canopy of trees, enjoying the sounds of birds chirping and water flowing in a nearby stream.  There were very few interruptions but my guess is that would not have been the case had I been there on a weekend. (Read: If you visit any mountain in Korea, it's advisable to go on a weekday, as the crowds can get overwhelming.) 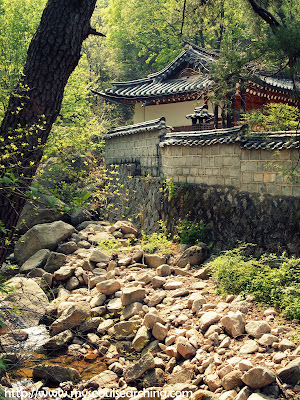 Although I plan on getting to Herb Island eventually, I was glad that fate had brought me to Dobong Mountain.  It was a great excursion to clear my mind and a convenient way to enjoy nature without having to leave Seoul.

To Get There:  Take the Seoul subway to Dobongsan Station (Lines 1 & 7).  From Exit 1, cross the street, take a left, and walk for 200 meters.  Turn right, following the road signs to Bukhansan National Park.  Continue to walk straight for 800 meters (about ten minutes) past the hiking supply stores to reach Sundubu Alley.  The entrance to the park is just a few minutes' walk beyond that.