How To Say ‘Dream’ In Korean

Do you like to dream about the future? Or maybe talk about your dreams at night to friends? What about telling the difference between the two?

Well, today your dreams will come true as we learn how to say ‘dream’ in Korean! 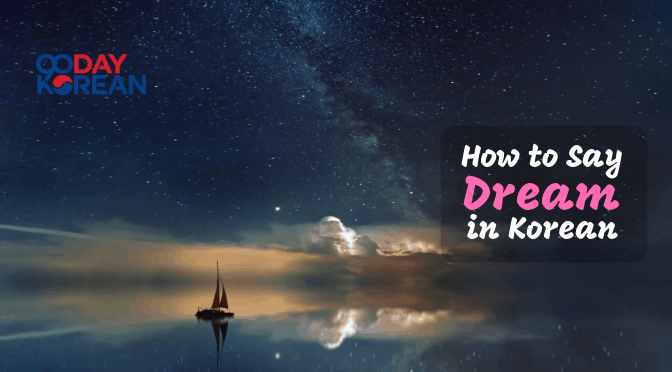 The word for how to say ‘dream’ in Korean is 꿈 (kkum).

This is the noun, and the verb ‘to dream’ is 꾸다 (kkuda). These two are most often used together, although it’s possible to use 꿈 on its own, 꾸다 is used almost exclusively together with 꿈.

So how to make the distinction of when to include 꾸다 and when not to? The phrase 꿈을 꾸다 (kkumeul kkuda) is usually used in the context of talking about dreams you had or have during the night. Instead of 꿈을 꾸다, you can also merge the two words together, into 꿈꾸다 (kkumkkuda). In this case, you can also use it for meanings outside of dreaming while asleep.

to have a dream

Meanwhile, if you want to talk about your dream in life, for example, you could drop 꾸다 from the sentence.

Another word for how to say ‘dream’ in Korean is 바람 (baram). This specifically means ‘wish’ as in something that you wish or desire to have, rather than what your mind cooked up while you were sleeping. It’s close enough to the meaning of ‘dream’ to be interchangeable with the word 꿈, and 꿈 might be better to use in many situations to avoid confusion since 바람 has other meanings as well.

While it is possible for you to study the words in this article simply by reading their romanized versions, it will come in handy for you to be able to read Hangeul if you ever wish to come to Korea. Hangeul is the Korean alphabet, and not difficult to learn. In fact, you can learn it in just 30 minutes.

The words and grammar in these examples would be used in professional settings or with those older or higher in the social hierarchy than you. You might hear this style of talking if you work at a Korean company, or in a drama/movie.

So what level of Korean do you dream of reaching? The skies the limit! But we're here to help along the way. Let us know what word you'd like to learn next in the comments below!

The post How To Say ‘Dream’ In Korean appeared first on 90 Day Korean®.