How To Say ‘Bedroom’ In Korean

Today we will continue on the topic of learning the names of different rooms in your home in Korean. Did you already go through the lessons for ‘kitchen’ and ‘bathroom’? Can you guess what we will learn to say in Korean today? That’s right! We will learn how to say ‘bedroom’ in Korean! After all, just like a kitchen and a bathroom, every home has one! Of course, in a studio – called a one room in Korea – it may not be separate from the kitchen and the living area, but today you will learn how to describe that, too!

The word for how to say bedroom in Korean is 침실 (chimshil). This word combines the word 침대 (chimdae), which means ‘bed’ in Korean, with -실 (shil), the suffix noting something as a room in Korean.

Occasionally, you may also hear people refer to their bedrooms as 침방 (chimbang), as 방 (bang) stands for ‘room’ in Korean. However, it is much more common to use the word 침실 for ‘bedroom’, while 방 may be used to simply refer to your room, ie. 내방 (naebang), which is ‘my room’ in Korean.

Associations for ‘Bedroom’ in Korean

To create an association for ‘bedroom’ in Korean, let’s take the word 침실 and break it down. It has two parts, ‘chim‘ and ‘shil‘ so what words could we use to associate with that? How about ‘chimney’ and ‘window sill’?

For our story, let’s imagine that when Koreans go to sleep, they sleep on a chimney as a bed and call it ‘chimney day’ or ‘chim day‘ for short. Now imagine you’re looking at blueprints for a home. How do Koreans identify rooms on the blueprint? They draw window sills around them! So when they look at a blueprint and see a ‘sill‘ they immediately know it’s a room!

So naturally what is a ‘bedroom’? The place they sleep, chimney, identified on the blueprint by the window sill. It’s the ‘chim sill‘ for short! 침실

Remember that a room can be identified with a -실 or with a –방. 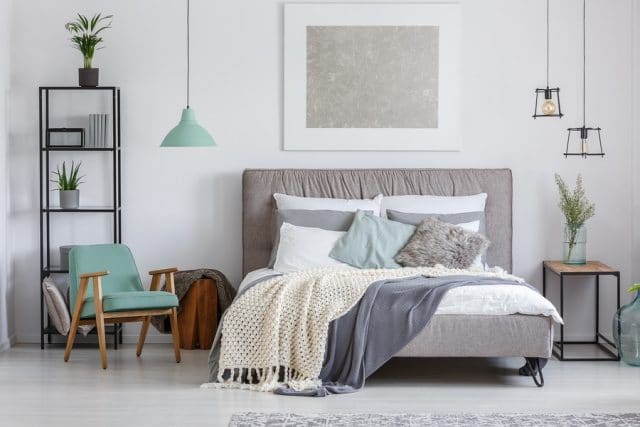 Here is this house’s master bedroom.

I don’t have a separate bedroom because I live in a one room.

Our home is a 2 bedroom house.

My dream is to live in a house with 10 bedrooms.

My bedroom has a bathroom in it! Isn’t that cool?

Now, was the word for ‘bedroom’ in Korean what you expected it to be? Which room in your home do you want to learn next?

The post How To Say ‘Bedroom’ In Korean appeared first on 90 Day Korean®.